Accessibility links
Matthew Sharpe Reads from 'Jamestown' Sharpe's novel is a funny, violent, romantic tale that begins when a cataclysmic event in a futuristic Manhattan sends a busload of survivors fleeing for the wilds of Virginia — into the past, and encounters with Powhatan and Pocahontas. 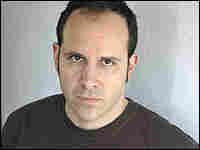 On timing a novel and a 400th anniversary

On 'Jamestown Ray-Gun Death Trip' and other discarded titles

Read an Excerpt from 'Jamestown'

Glen Weldon on 'Jamestown' and Other Summer-Reading Picks June 4, 2007

Book Tour is a new Web feature and podcast. Each week we present leading authors of fiction and nonfiction as they read from and discuss their work.

Matthew Sharpe's Jamestown isn't easily categorized. Its flat-footed title makes it sound like just another history, perhaps a commemoration of the 400th anniversary of the first English colony in the New World.

But don't be fooled. This Jamestown is a novel — perhaps the only one in what Sharpe calls the "post-apocalyptic/ sci-fi/historical genre." It's a funny, violent, romantic tale that begins when a cataclysmic event in a futuristic Manhattan sends a busload of survivors fleeing for the wilds of Virginia. Making their way down what's left of Interstate 95 in search of uncontaminated food and water, they arrive only to meet with more danger, this time in the person of bow-and-arrow-bearing warriors answering to the Native American potentate Powhatan. The story, which unfolds in the past, present and future, gets told in a series of blog entries, in language borrowing equally from Elizabethan English and instant messenger-speak.

Sharpe, the author of three previous works of fiction, is known for parodying the American quotidian. His 1998 short-story collection, Stories From the Tube, transforms the upbeat dialog of TV commercials into something far darker. His 2000 novel Nothing Is Terrible features a suburban orphan who accidentally kills her brother, falls in love with her sixth-grade teacher and runs away with her to Manhattan. And Sharpe's popular The Sleeping Father, published in 2003, tells the story of two Connecticut teenagers as they struggle to rehabilitate their father after he inadvertently mixes two incompatible anti-depressants, goes into a coma and emerges with brain damage.

While Jamestown includes all the touchstone historical characters, they've morphed in Sharpe's hands to become only faintly recognizable. Johnny Rolfe is the settlers' communications specialist; Pocahontas is part Valley Girl. As Sharpe told New York magazine: "She ... sounds like a sophomore English major at Wesleyan University, where I teach."

This reading of Jamestown was recorded in May 2007 at the Politics & Prose bookstore in Washington, D.C. 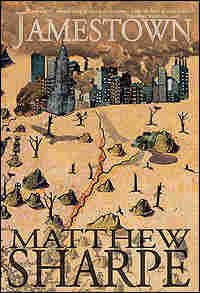 To the excellent person I know is reading this:

Hi! My name is Pocahontas and I'm nineteen, but Pocahontas isn't my real name. I will never say my real name. If I say my real name you will die. Anyone who hears my real name will die. Pocahontas is my nickname, it means "person who cannot be controlled by her dad." My dad didn't make up my nickname, my mom did, before she died, and he's kind of mad that that's my nickname because every time someone says it — which is any time anyone says my name because anyone who says my name name will die, which has been proven, but right now I can't talk about that because in English, which is not my mom tongue, you can talk about only one thing at a time, at most — any time anyone says my nickname they're also saying my dad can't control his daughter, and that's bad for my dad, my dad claims, because he's chief of our town and a bunch of other towns in this general area — Superchief, I think y'all might say in English.

Oh English! How I love to write to you in English, even though it is so slow to do anything in English, because English moves at the speed of talking, whereas my language moves at the speed of thinking. Thinking in English is beautiful sort of in the way it is beautiful to have smoked a big bowl of busthead. When I think of the world in English, or look at the world in English, it moves so slow, like English, and that feels good cuz life's so short! Like when I look, in English, at my two little cousins, Opechancanough and Steve, throwing a ball back and forth between them in a meadow or former parking lot, the ball slides along the air as a snail slides along the sand, and leaves a furrow of air in the air as thoughts of you, the excellent person I know is reading this, leave the faintest furrow in my brow.

I want to tell you all about the sweet but kind of weird and sad day I had today, okay? After I spent the morning working in the cornfields with my gal pals I was running around and around and around my dad's house. My dad's house is pretty neat, and contains many a mansion! It's shaped like the lowercase letter n, but as if you had a very tall stack of papers and each one had a great black letter n in the exact center of it, so that there was a big stack of n's all kind of connected to each other, and then you took a very sharp knife and cut away all the whiteness of all the paper surrounding the n's, and were left with about five hundred black n's stacked on top of one another, and then you tilted the stack so the n's were standing on their feet, so you had a tunnel of n's, which you lived in with your wife, who bore you a girl when you wanted a boy, or thought you wanted a boy, but you found you loved the girl so much you let her disobey your rules, and so on, so that's what my dad's house looks like, which I was running around and around, a thing a girl my age won't do for much longer, it just ain't right, who knows why, gonna have to find another place to run, and maybe not around but through.

Well so I'm running when this guy, my favorite second cousin, Stickboy, came up to me and asked me to take a walk with him in the woods, and I said yes, why not, it's always good to spend time with him.

Stickboy's smart, and knows things no one else knows, but few acknowledge this. His dad was killed before he was born and his mom, who is the cousin of my dad, came to live with us, and gave birth to Stickboy in our n-shaped house. Like I said, my dad had no boy, i.e., heir, so Stickboy is supposed to take over the family business, which is executive-level politics, except for the little problem that no one thinks he's up to the job. "Doesn't kick," my father said, with his hand on his cousin's womb a month before Stickboy came down the tunnel ... and out into this vale of tears. "What kind of politician doesn't kick in the womb?" And many years later — now — when my father enters a room Stickboy is already in, Stickboy, without thinking, brings his hands up to his chest as if to defend his heart from a barb my dad would fling at it, and my dad says, "What are you doing, covering your breasts?" and both man and boy wince, boy cuz he wants my dad to love him, man cuz he knows he flings the barb at the heart of his adopted son cuz the boy's weakness reminds him of his own and he's therefore, in a sense, flinging a barb at his own heart. Isn't life sometimes complicated and sad?

I walked with Stickboy out into the woods. I want to write a fabulous description of the woods for you in the exciting language of English, but it's going to be hard. I don't know the English names of woodsy things. There's a kind of moss that's soft and green and smells like the neck of my mom, who died when I was one. I guess I'll call this moss mom's neck. Mom's neck drips or droops from the branches of the trees. The branches have leaves that fall off in autumn and grow back in spring. The leaves in the spring are green and round or spear-shaped or heart-shaped or radiant. The air in the woods this time of year is wet and green. When I open my mouth in the woods it fills with green. When I speak in the woods my words come out green. If I think of someone I love, my thoughts are green. The woods also have the remnants of a defunct civilization that thrived on this very spot, so for every couple dozen trees there'll be a brokedown edifice of years gone by. The woods have deadly creatures too but I'll not say their names right now.

Deeper and deeper into the forest went Stickboy and I. "I think we will not marry after all," he said, which stopped me in mid-stride.

"I think we will not marry after all."

"What will prevent us?"

"Why, whenever you talk about the future, do you sound as if you're describing a country where only sad people live?"

Well it hit me pretty hard when he said that about him and me not getting married, an event we'd been planning since we met at birth. I think he's right but I don't know why. Maybe he's right because he said it. Does that ever happen in English, where saying something makes it true? That happens in my language all the time so people have to be careful what they say but no one ever is, enough.

Then some time passed in the woods that I don't remember anything about, a little wedge of life that's disappeared. And then he said one more thing to me, a single word that caused a single feeling in my breast. The feeling I remember well, but not the word that was its maker. Ugh, I wish I hadn't written this. Too late now.

From Jamestown: A Novel by Matthew Sharpe, © 2007. Soft Skull Press. Excerpted with permission. 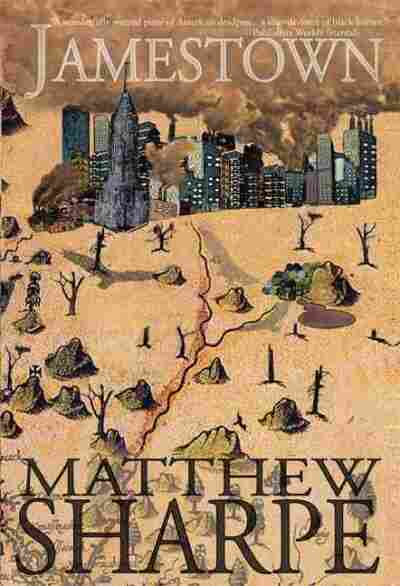