Accessibility links
Racial Achievement Gap Still Plagues Schools Black and Latino students consistently have lower test scores and attendance rates than their white counterparts. Placing struggling students in remedial classes has been a standard way to deal with the issue, but this method is coming under fire. 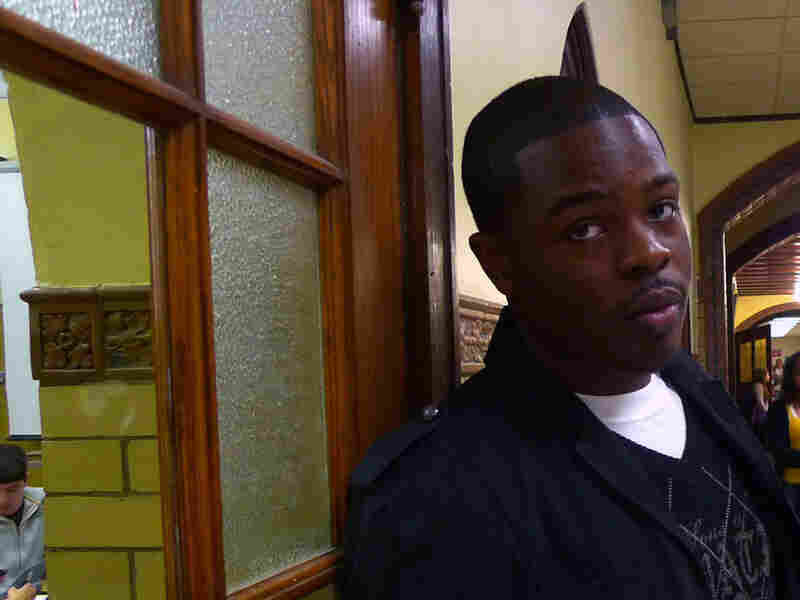 Jerry Mornvil, a recent graduate of Columbia High School in Maplewood, N.J., says being in a lower-level class had a negative impact on his own and his classmates' attitudes about school and themselves. Nancy Solomon for NPR hide caption 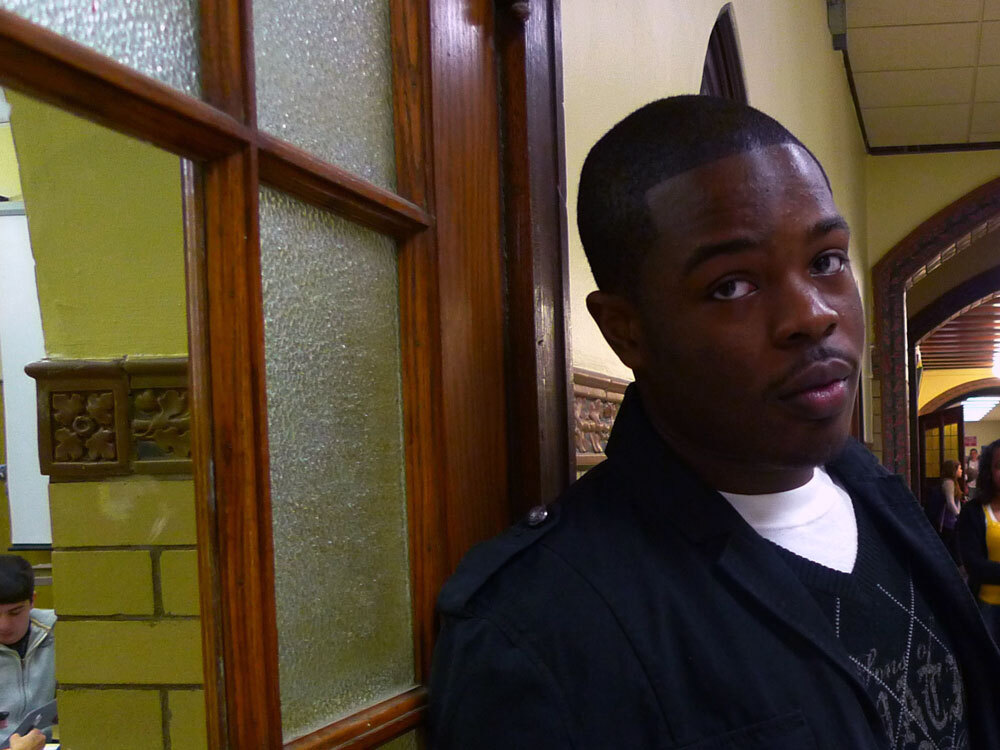 Jerry Mornvil, a recent graduate of Columbia High School in Maplewood, N.J., says being in a lower-level class had a negative impact on his own and his classmates' attitudes about school and themselves.

Typically, schools place children who are falling behind in remedial classes, to help them catch up. But some schools are finding that grouping students by ability, also known as tracking or leveling, causes more problems than it solves.

Black children in higher-level classes were ignored, or perceived that they were being ignored, or did not feel comfortable going to the teacher after school to get help

Columbia High School in Maplewood, N.J., is a well-funded school that is roughly 60 percent black and 40 percent white. The kids mix easily and are friendly with one another. But when the bell rings, students go their separate ways.

Teacher Noel Cooperberg's repeat algebra class last year consisted of all minority kids who had flunked the previous year. There were only about a dozen students because the school keeps lower-level classes small to try to boost success. But a group of girls sitting in the middle never so much as picked up a pencil, and they often disrupted the class. It was a different scene from Cooperberg's honors-level pre-calculus class, which had three times as many students — most of them white.

These two classes are pretty typical for the school. Lower-level classes — called levels two and three — are overwhelmingly black, while higher-level four and five are mostly white. Students are assigned to these levels by a combination of grades, test scores and teacher recommendations.

"You could look at the highest-achieving kid and the lowest-achieving kid and say 'Oh my god, they're worlds apart,' right?" says Amy Stuart Wells, sociology and education professor at Columbia University's Teachers College. The problem, Stuart Wells says, is the way kids in the vast middle are sorted. The racial segregation corresponds to the difference in average test scores between black and white students both at the school and nationally. But Stuart Wells says racial stereotypes still play a role.

"What you're seeing in suburbia and how it is playing out along racial lines is testimony to the fact that race still matters quite a bit in a society and very much so in education," she says.

'The Teacher Left Us In The Dust'

The two towns served by the school are diverse, middle-class suburbs, although a third of the students are low-income and almost all of those children are black. But a considerable number of the African-American students are middle and upper middle class. 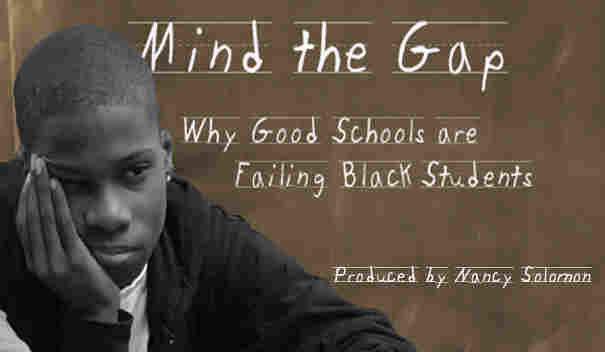 Quinn lives in a large house in a solidly middle-class neighborhood. He has two older siblings who have gone to college and he says his parents pushed him to do well. His freshman year, he was placed in level four classes, one of a small group of African-American students.

"We kinda sat together," he says. "It would be the black kids over here and the white kids over here. It just seemed like the teacher, she stayed on the other side of the room away from us. The teacher focused on the larger group of whites and left us in the dust."

Columbia Principal Lovie Lilly, who is African-American, is troubled by the racial segregation in leveled classes and says she has heard stories similar to Quinn's many times. She says levels do reflect differences in skills and work habits, but she believes race plays a part. Lilly conducted research on the experience of black students at her school while studying for her doctoral degree.

"Black children in higher-level classes were ignored, or perceived that they were being ignored, or did not feel comfortable going to the teacher after school to get help," Lilly says. "They gave up and decided to go to level three classes where at least there were other black children."

But this comfort comes with a penalty. Lower-level classes ask less of students, so they do less. The school district's new superintendent, Brian Osborne, who is white, says the lack of rigor in lower levels is his top priority for change.

"The second day that I was here as superintendent I met with a group of middle school students for lunch," Osborne says. "I asked the students one of the questions that I always ask students, which is: What are your teachers' expectations of you? The very first thing that one of the students told me was 'It depends what level you're in.' "

The question Osborne has yet to answer is whether lower-level classes can hold students to higher standards, or whether any sorting system sends the wrong message.

Jerry Mornvil, a recent graduate, remembers his level two class. He says the lower expectations affected the way students felt about themselves — and about school.

"Our first day, going to that class, we made a nickname for that class," he says. "We called it the retarded class."

Students were unhappy that the school placed them in a lower level, Mornvil says.

"We were mad," he says. "A lot of kids were being rude to the teachers and stuff like that. That class was crazy. It was like every African-American or black ethnic friend I knew in my grade, they were all in that class."

Pros And Cons Of Levels

For the past 20 years, proposals to get rid of levels at the school have been defeated by the well-organized parents of highest-performing students. They tend to be affluent and white, and they fear their kids will be slowed down by mixed-ability classes.

"I've done both and I've found that when you have kids mixed together, then you're gonna find that this group of kids at this level cannot work at the same level as someone else," says Richard Moss, an African-American math teacher with 37 years of experience. "OK? So that it makes it difficult to organize, and then the frustration level increases at both ends."

On the other side of this issue is Line Marshall, who teaches a demanding medieval literature class to a mixed group of kids from levels two, three and four. The class began as a scheduling mistake, but it turned out to work.

"Which of you is going to present the squire?" Marshall asks her class. "Chenerl?"

Chenerl Sainte is one of Marshall's level two students, and he has been in level two classes since middle school. Yet here he is in Marshall's class, explaining the character of the squire in The Canterbury Tales, and doing it well.

"I saw in the kids who wanted the opportunity, a light open up," Marshall says. "The kids who had been used to, I guess, doing very basic work, whose English classes for whatever reason hadn't been challenging, would come up to me and say: 'We've just never thought this way before. No one has ever asked us these questions before.' "

Superintendent Osborne is moving gingerly toward change. He's created a task force to study leveling in Maplewood, and he is hoping to convince parents that education is not a zero sum game — that the schools can boost the lowest performers while improving achievement for all.