Accessibility links
Marco Rubio: Conservatives' New Man in Florida? A former Florida state House speaker, Rubio is challenging former Gov. Charlie Crist for the Republican nomination in next year's Senate race. Rubio is confident and gifted on the stump, but some local GOP officials worry his message is too extreme to attract moderate voters. 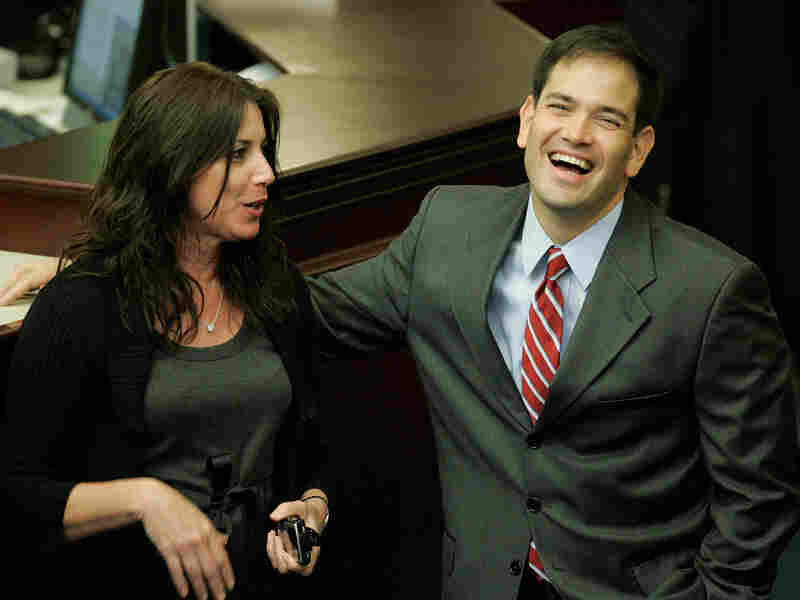 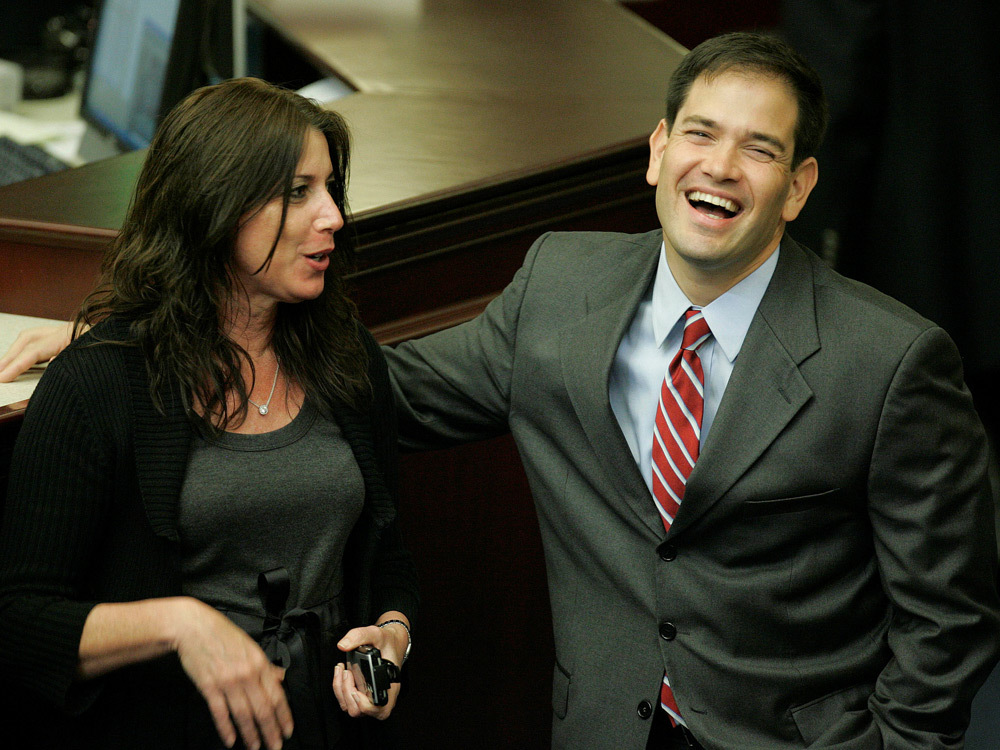 Former Florida House Speaker Marco Rubio shares a moment with state Rep. Ellyn Bogdanoff during his visit to the House chamber in Tallahassee in April.

When a political party is out of the White House and in the minority on Capitol Hill, it's time for licking wounds. But it's also time to think ahead to who the next leaders of the Republican Party will be.

Rubio, a conservative outsider and former speaker of the state House, is challenging Gov. Charlie Crist for the Republican U.S. Senate nomination. There's an open seat next year because of Sen. Mel Martinez's surprise retirement.

Two weeks ago, Rubio spoke at a luncheon of the Conservative Women's Movement at a recreation center in The Villages, the largest residential development in Florida that lies between Orlando and Gainesville.

About 170 seniors — men and women — who live in this golf-carts only, retirement megacommunity gathered to hear him. Unlike most Floridians, these people have heard of Rubio.

In his address, Rubio said that other industrialized countries have "guaranteed" health insurance, child care and long vacations because they want government to do more.

And that, he says, means less innovation, fewer small-business start-ups — a country not cut out for entrepreneurs, the go-getters.

"I think the United States of America can best be described as the greatest single collection of go-getters in world history," he says.

Rubio has made the cover of National Review. George Will has written about him and predicted that he'll win. And he was masterful before this very friendly, very conservative audience — not just with the set-piece phrases and well-worn jokes, but also with his obvious enjoyment of fielding their questions and his flair for the quick comeback.

The Villages is what the Garden of Eden would look like, if God played golf. There are nine full-length courses and 24 shorter executive courses that residents can play free for the rest of their golfing lives.

It is a very long way from Rubio's stomping grounds in working class, Cuban-American West Miami, where he grew up. At his favorite local Cuban bakery there, the smell of coffee and the sound of Spanish are in the air.

Proprietor Lenin Martin knows Rubio well. Like Martin's parents, Rubio's parents came to America from Cuba. His father tended bar. His mother worked as a maid. Rubio got a football scholarship to a small Missouri college but came back to attend community college, then the University of Florida, and then the University of Miami Law School.

He entered local politics and became a city commissioner of West Miami (population 6,000), and then a state representative from West Miami. He still lives there with his wife — a former Miami Dolphins cheerleader — and their four children. And he still goes to the town hall to pay his water bill.

In the state Legislature, thanks to Florida's term-limit law, which creates frequent openings, Rubio rose to be speaker of the House at age 35. Also thanks to term limits, he is now a former state legislator, practicing law and teaching a class in Florida politics at Florida International University.

Rubio has won endorsements from some of out-of-state conservative Republican senators like Jim DeMint of South Carolina and James Inhofe of Oklahoma. He is said to enjoy the quiet support of his mentor: former Gov. Jeb Bush.

But most Florida Republican Party officials are against him. They see him as talented, but ambitious.

And they see him as overly critical of Crist for welcoming federal stimulus funds, for example. One county chairman said he can support Rubio if he wins, but Crist is popular and well-known, so why not stick with him?

One South Florida consultant faults Rubio for not helping Sen. John McCain's campaign last year, when the GOP presidential candidate lost Florida. Rubio backed former Arkansas Gov. Mike Huckabee in the primary. The consultant also faulted Rubio for taking a job as a Univision analyst and for not being enough of a Republican advocate.

Florida Republicans are very confident that they can win the Senate seat with either Crist or Rubio, but the county chairman wondered whether Rubio, describing himself as the real conservative, might attract fewer moderates — and provide shorter coattails down-ticket.

There are no political Messiahs; there are no singular individuals that can rise up and save the world.

But Rubio insists his message is not an extreme one.

'It's About What's Happening In Our Country'

When asked why he doesn't stay in Florida politics and run for, say, attorney general, Rubio says his campaign isn't about his "political ambitions."

"It's not about me doing the next logical step up this long career in politics," he says. "It's about what's happening in our country. I believe deeply that we need to send people to Washington that will stand up and fight for what we believe in. And I don't think any other candidates in this race will do that."

Rubio says if Martinez were still the incumbent, he would not have run.

Rubio's gifts on the stump are undeniable. He's sharp, confident and young.

He still has some rough edges. When he explains his opposition to Roe v. Wade, he speaks of "the privacy clause" of the Constitution. There isn't any.

And when he spoke at The Villages about what he could reasonably achieve in the Senate, Rubio's choice of words misjudged some of the more religious Christian conservatives in the room.

"There are no political Messiahs; there are no singular individuals that can rise up and save the world. There aren't," he said, as people in the room laughed at him — because they believe there are.

That heretical, metaphorical miscue didn't seem to diminish Rubio's support in a room that included at least one prayer group whose members said, "God has chosen Rubio."

And these conservative Floridians hope that next year, Florida voters will choose him, too.