Accessibility links
In Serial Killer's Former Home, A Search For Ghosts Musician Chris Butler was looking for a house where he could make loud music without disturbing his neighbors. He found the perfect house and for a deal, but it came with certain "conditions." The house was the childhood home of Jeffrey Dahmer and the scene of Dahmer's first killing. 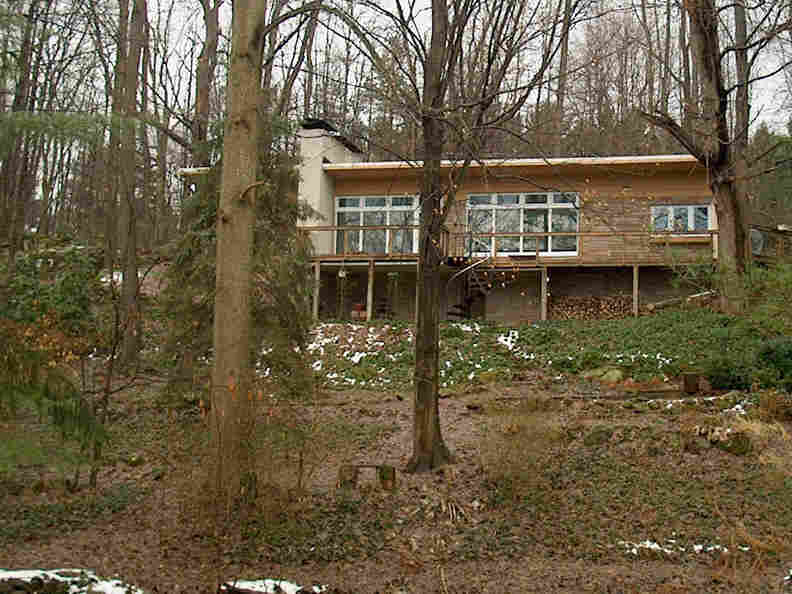 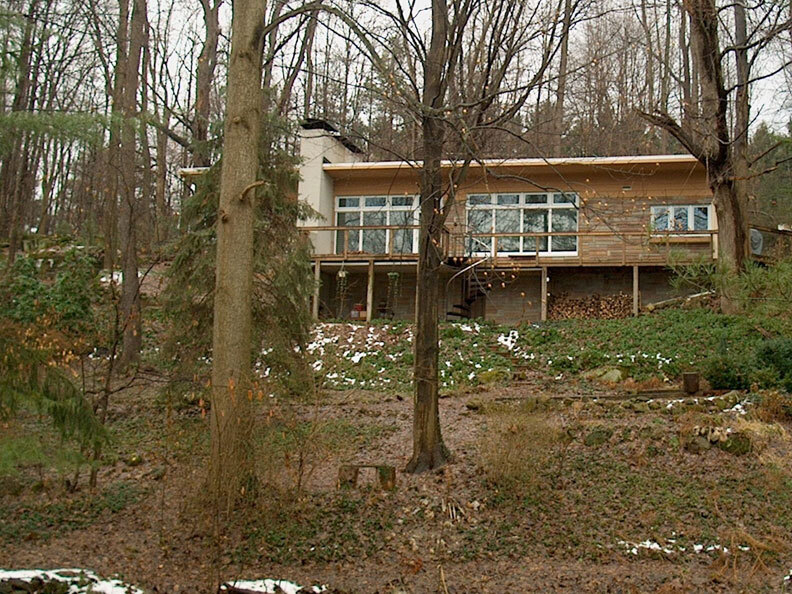 Jeffrey Dahmer's childhood home in Bath, Ohio, where musician Chris Butler now lives. Dahmer was convicted of murder in 1992 and was beaten to death in prison two years later.

Let that sink in for a second.

If your first reaction is "eeewwwww," that's perfectly understandable.

Dahmer was one of America's most notorious serial killers; his rampage lasted from 1978 to 1991. He confessed to killing at least 17 young men. Many of these murders involved torture and cannibalism.

A Place To Make Music

I bought the house, though, not for some kind of perverse, Goth thrill, but because I needed a place in woodsy-suburby Northeastern Ohio where I could make a loud musical racket and not bug my neighbors. This midcentury modern house on 2 acres of forested hillside was ideal.

I was instantly charmed the first time I pulled in the driveway and was really puzzled why such a fantastic pad had gone unsold for six months, though it was priced way below anything comparable in the area.

Charmed turned to creeped-out when 24 hours after I first saw the place with my real estate agent, Greg Greco, he told me of the house's grisly provenance.

Greco says he remembers when we came to look at the house for the first time. "That evening, the listing agent called to say we have a disclosure issue," he says. "I knew Jeffrey Dahmer had been in the area. ... And then she said there was a murder in the home. It was of significant notoriety, and we needed to disclose it. And my first thought was, 'How am I going to tell Chris this?' "

Dahmer did commit his first murder here — a hitchhiker named Steven Hicks whom he lured back to the house with promises of drugs and alcohol, and then clubbed with a barbell after Hicks said he wanted to leave. Dahmer later dismembered Hicks' corpse in the house's crawlspace.

Now, I won't lie, there is a twisted kind of cachet attached to living in a house where a famous homicidal maniac kicked off his career. I didn't broadcast this, but it could be useful. 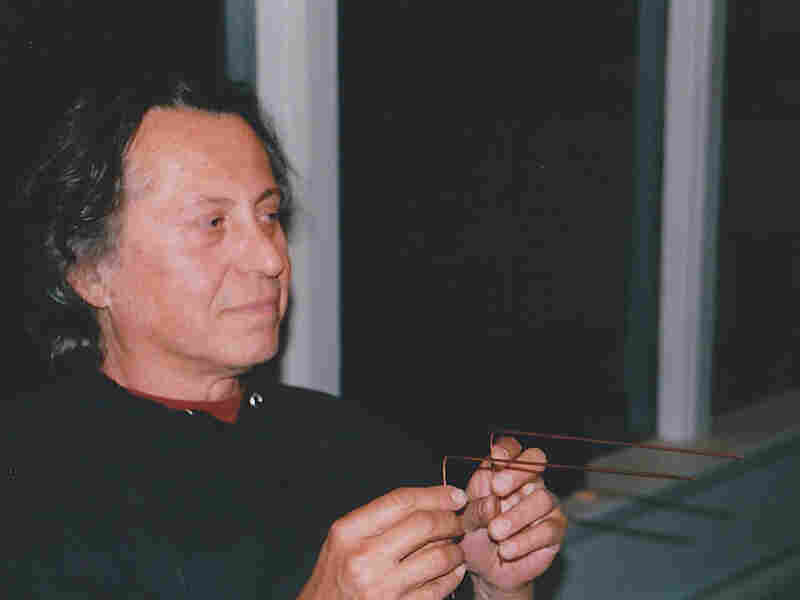 Butler uses copper divining rods, which are believed to detect spiritual hot spots, to see if his home is haunted. Courtesy of Chris Butler hide caption 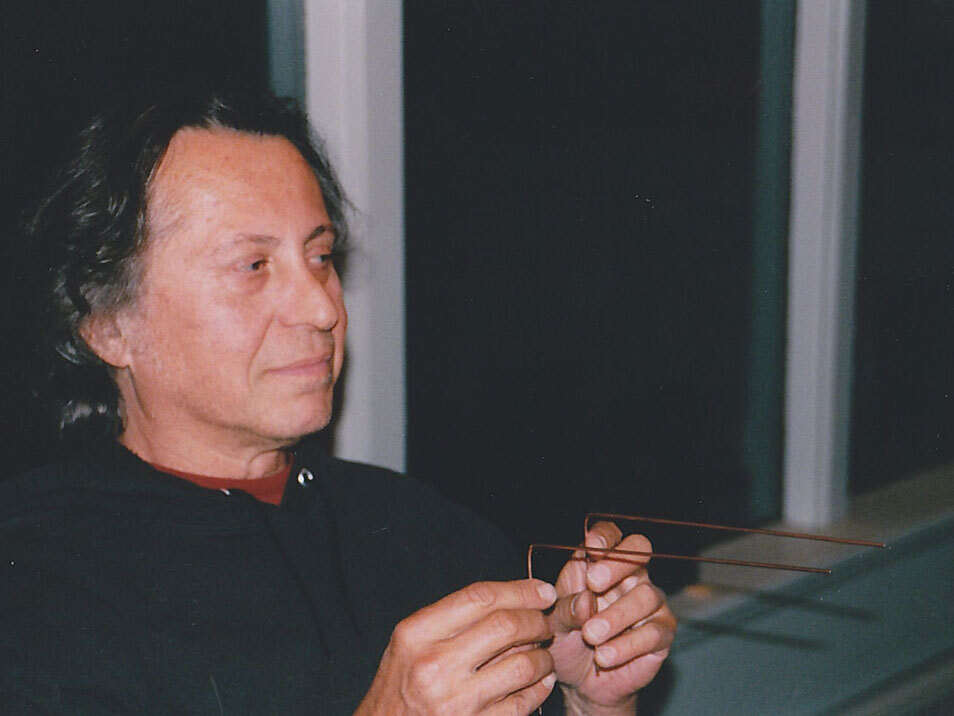 Butler uses copper divining rods, which are believed to detect spiritual hot spots, to see if his home is haunted.

If the party chatter stalled on dull topics, I had a surefire conversation stopper and subject changer. Then someone would inevitably ask — correction, someone educated and worldly, and who you'd think would know better, would inevitably ask: "Uh, have you seen any, you know, ghosts?"

The truth is, the vibe here is fantastic. The house didn't kill anybody, and I didn't see any ghosts. I'm not superstitious or a believer in the paranormal, but after months of people freaking out about where I was living, I did begin to wonder if there might be some leftover bad business in the place.

As it turns out, in Northeastern Ohio, there is a lot of interest in the paranormal. Ghost hunts were being offered at creepy sites all around the region, and I'd been approached by several psychics and paranormal clubs that wanted to bring audio recorders and video cameras over to see what they could scare up.

Roe York and Cheryl Kneram wanted to organize just such a paranormal investigation at my house. Their specialty is gathering electronic voice phenomena, or EVP — ethereal voices or sounds that recording devices pick up when you think you're just taping Little Johnny's 6th birthday party.

Now, please note that these women are not flakes, or fools, either. In fact, they come across as skeptics most of the time, yet both have had many experiences that they can't explain.

Roe and Cheryl say the key to a successful hunt is picking a significant date. May 21, Dahmer's birthday, was perfect.

The house and its infamous crawlspace — where Dahmer had dismembered Hicks — was wired up with night-vision video camcorders, digital audio recorders, still cameras on timers. I'd also hung microphones in key spots and plugged them into my computer's hard-disk recording system.

In short, if a ghost so much as passed gas, we'd document it.

There were three possible outcomes of the evening's experiment: one, they'd get nothing; two, they'd get something vague, something that might-be-could be, but inconclusive or at least explainable by natural or mechanical causes; or three, they'd get a recording that irrefutably proved the existence of the afterlife, and the house would be overrun with the curious and kooky, and my quiet, semihermit life here would be ruined.

When I came back to the house in the early morning, Roe and Cheryl were having technical problems.

One of the cameras sitting in the living area, in front of the fireplace, was off. It was expected that either the film ran out, or the battery died, or both. But 300 minutes of battery life remained, and only 40 minutes of tape was used.

In fact, all the gear that was in the vicinity of the crawlspace had malfunctioned. It was working when we left, but machines stopped, batteries went dead and my computer system showed a 2 gigabyte sound file, a huge file, that refused to open.

Did cranky spirits not want us to find them? Was it our technical ineptitude, or was our sophisticated equipment just too embarrassed to be part of something as silly as a ghost hunt?

Roe and Cheryl didn't find anything conclusive on the few machines that had functioned properly, but it really didn't matter, because I know the house is haunted, maybe not by ghosts, but by something much, much scarier. It's haunted by reality — by the unbelievable horror that humans are capable of.

Dahmer's "ghost" does exist. He haunts my neighbors who can't overcome their fears and come inside for a friendly cup of coffee. And he haunts his victims' families every minute of every day.

One more thing — and Roe and Cheryl didn't know this: I had hidden a secret recorder in the house to see if I could catch someone sneaking back in to fiddle with the equipment. And in the middle of the hours of house ambience and the refrigerator cycling on and off and maybe a mouse or two, there was something: a funny noise.

Probably nothing — easily and rationally explained.

I mean, you don't believe in ghosts, do you?