Accessibility links
Emma And Elena, Exposing The Sex Trade Through a striking art installation, actress Emma Thompson chronicles a naive 18-year-old from a small Eastern Europe republic who was caught up in London's sex trade. Her name is Elena, and her story makes its debut in New York on Nov. 10. 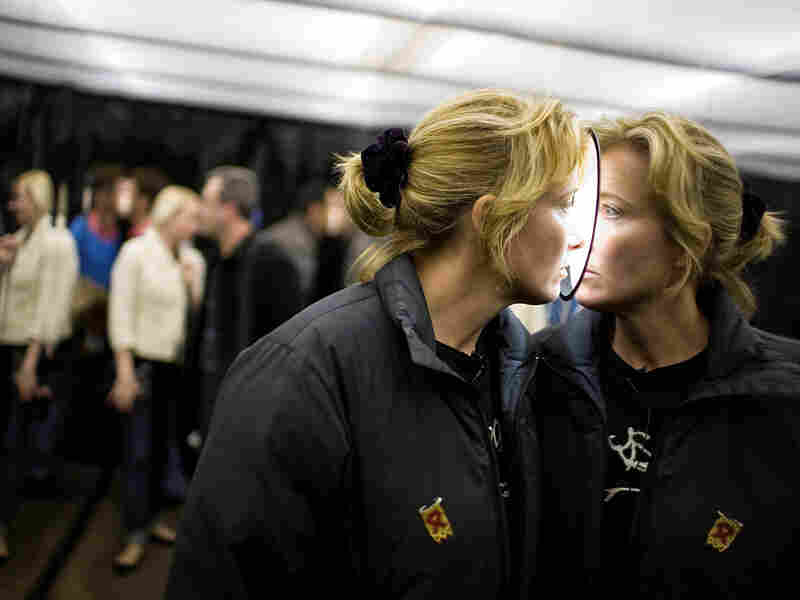 "I Wasn't Me Anymore:" Emma Thompson tours Journey, an art installation she co-created with a woman who was victimized by sex traffickers. Viewers who look through this porthole see their own faces superimposed on the bodies of woman wearing "prostitutes' weeds" — tattered lingerie and other worn, used clothing. Simon Clark/Eyebox hide caption 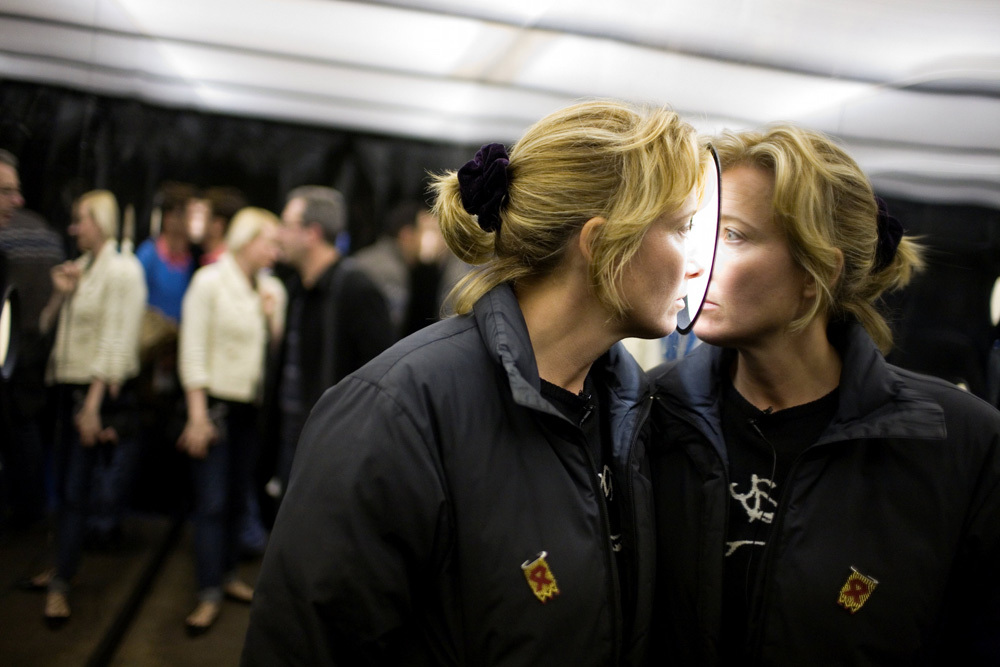 "I Wasn't Me Anymore:" Emma Thompson tours Journey, an art installation she co-created with a woman who was victimized by sex traffickers. Viewers who look through this porthole see their own faces superimposed on the bodies of woman wearing "prostitutes' weeds" — tattered lingerie and other worn, used clothing.

Tour 'The Journey' With Emma Thompson

Emma Thompson may be best known for the stories she's been part of on screen and stage, but now she wants to tell you a different sort of tale. It's the story of a young girl, Elena, who was forced into the global sex industry.

Elena is from a small town in the Eastern European republic of Moldova. At the age of 18, she was promised a job and a future in the U.K. When she arrived, she was made into a prostitute.

Thompson, who met Elena through her involvement with a group that works to help survivors of such experiences, has curated and championed an art installation inspired by Elena's story. It's called Journey, and it has its New York opening this November. The installation comprises seven shipping containers, each designed by a different artist to interpret one part of what Thompson calls Elena's "journey into hell."

Thompson tells Scott Simon that she was immediately drawn to Elena — to protect her privacy, NPR isn't using Elena's last name — because "she's a survivor, and most survivors are extraordinary people." As they got to know each other better, however, one of Elena's qualities struck a particularly special chord with Thompson: "Her capacity to tell this story whilst laughing and smiling and being positive about it and herself." 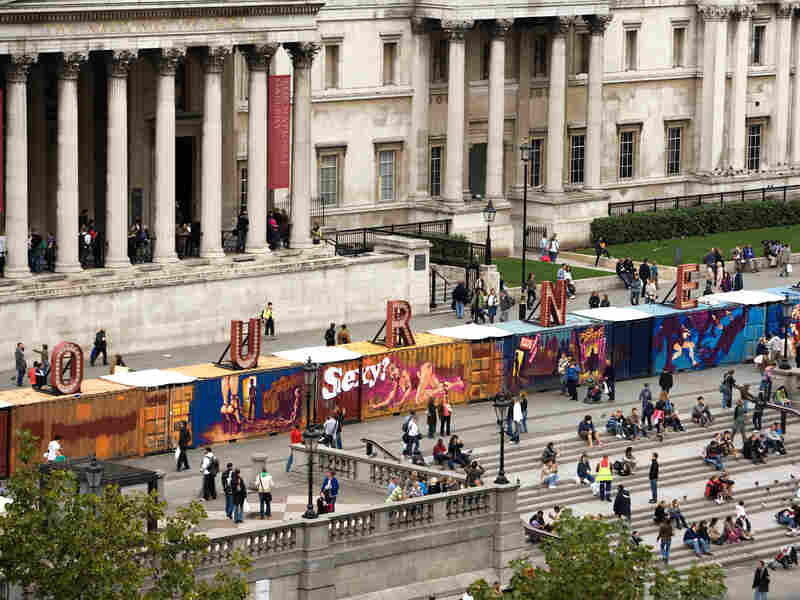 Destination London: Journey outside Britain's National Gallery, where it was installed in 2007. Simon Clark/Eyebox hide caption 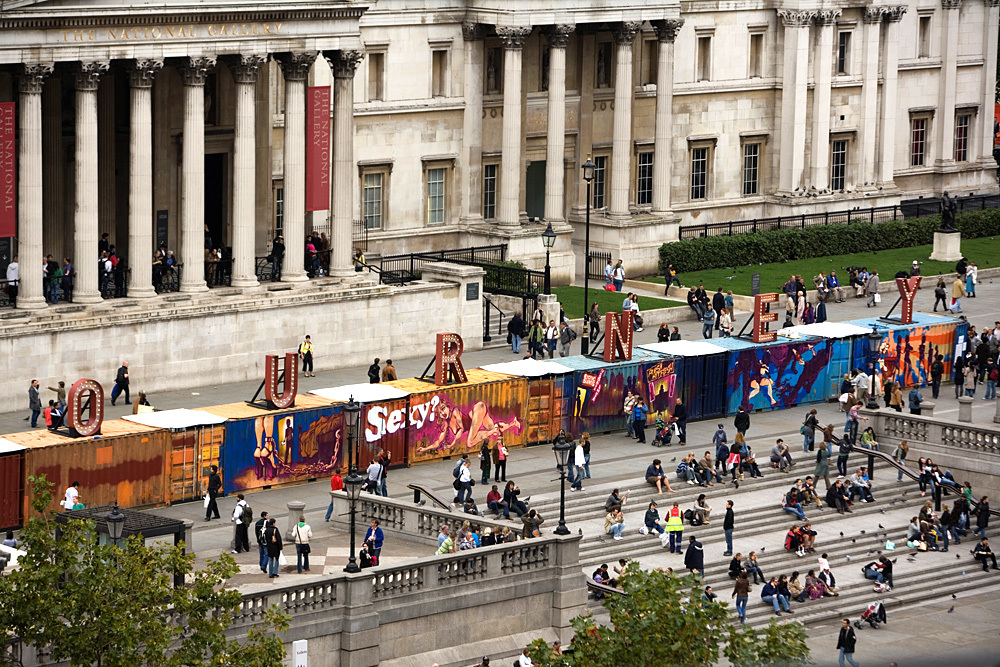 Destination London: Journey outside Britain's National Gallery, where it was installed in 2007.

As Thompson and Elena deliberated over how best to tell Elena's story, they settled on the idea of an art exhibit that would engage the viewer.

"She had already been objectified," Thompson says, "and I think sometimes watching those things on the screen actually furthers or deepens that sense of objectification. ... The person who's watching is just sitting there watching. They're not walking, they're not doing, they're not seeing and feeling things in a different way."

"They resonate so strongly; they're such powerful, huge objects, and we associate them with the movement of goods, which is essentially how she was treated."

The containers are arranged in a kind of chronological order. The first, which invites viewers to look through a series of keyholes at scenes from Elena's childhood, imagines what it was like for her to lose her father and then be offered the hope of a better life elsewhere. That hope came in the form of the woman who approached Elena in a marketplace, dangling the prospect of a job as a secretary in London. She's represented in the installation as a vaguely menacing figure looming over a suitcase-toting Elena. The writing on the wall reads, in a childlike chalk scrawl: "'Would you like to go to England?' she said."

The next container represents Elena's journey from Moldova to London. It's pitch-dark, and all you hear are repetitive sounds of movement.

When Elena arrived in London — her passport confiscated, a stranger alone in a foreign city — her handlers gave her a new set of work clothes. Thompson calls them "prostitutes' weeds" — tattered underwear and stockings "that had been worn by other women, old used stuff." Elena's handlers forced her to wear them.

Oscar-winning costume designer Sandy Powell, who designed this part of the installation, wanted to convey what it would be like to look in the mirror and realize that you had lost your identity. So when visitors walk into this container, they look through a sort of porthole at a mirror, seeing their own face superimposed on a picture of a prostitute's body. The experience, not surprisingly, can be deeply moving for women who walk through. But Thompson says that men "didn't laugh or find it funny. They understood absolutely what it meant."

Thompson curated the last container herself. She built it around what she calls "the language of rejection and disbelief:" It's a 15-minute tape of Elena telling her own story, juxtaposed with government documents expressing skepticism about the claims of asylum-seekers who, like Elena, were trafficked into Britain.

Thompson isn't merely flying into New York for the grand opening of this exhibit. She'll be staying for all of its week-long installation in Washington Square Park, Nov. 10-Nov. 16.

It's "a very personal journey for me as well," Thompson says. "It's very important for me to try to explain this as best as I can to people."