Accessibility links
Federal Judge Downplayed Role in Detainee Cases When White House lawyer Brett Kavanaugh faced a confirmation hearing for a judgeship on the federal appeals court in Washington, he said he had no involvement in rules governing detention of enemy combatants. Now, it appears that's not quite true. 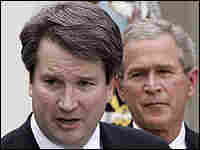 Brett Kavanaugh with President Bush after he was confirmed by the Senate as a judge on the U.S. Circuit Court of Appeals for the District of Columbia in June 2006. Alex Wong/Getty Images hide caption 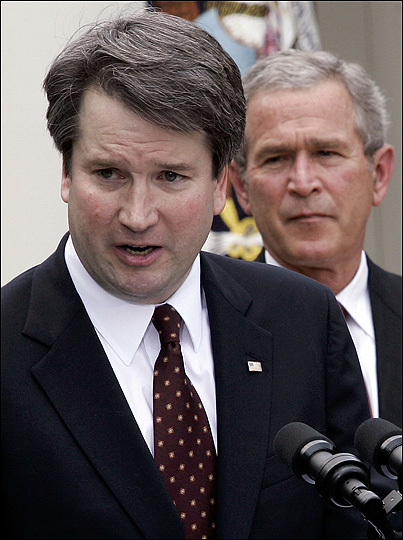 Brett Kavanaugh with President Bush after he was confirmed by the Senate as a judge on the U.S. Circuit Court of Appeals for the District of Columbia in June 2006.

One of President Bush's most controversial judicial appointees, Brett Kavanaugh, may have been less-than-forthright with Congress at a crucial hearing last year to confirm his appointment to a seat on the powerful federal appeals court in Washington, D.C.

Kavanaugh told senators in May 2006 that he "was not involved in the questions about the rules governing detention of combatants" during his time as a White House lawyer. Now, it is clear that Kavanaugh took part in at least one White House conversation about detainees.

"What was your role in the original Haynes nomination and decision to renominate him?" Durbin asked. "And at the time of the nomination, what did you know about Mr. Haynes's role in crafting the administration's detention and interrogation policies?"

Kavanaugh replied, "Senator, I was not involved and am not involved in the questions about the rules governing detention of combatants, and so I do not have any involvement with that."

In fact, in 2002, Kavanaugh and a group of top White House lawyers discussed whether the Supreme Court would uphold the Bush administration's decision to deny lawyers to American enemy combatants. Kavanaugh advised the group that the Supreme Court's swing voter, Justice Anthony Kennedy, would probably reject the president's assertion that the men were not entitled to counsel. Kavanaugh had worked as a clerk for Kennedy. That meeting was first reported in The Washington Post. NPR independently confirmed the details with multiple sources.

Today, Kavanaugh has life tenure as a judge on the D.C. Circuit appeals court.

Durbin now says he feels "perilously close to being lied to" at Kavanaugh's confirmation hearing.

Durbin said in a telephone interview, "I will just say that he might have decided that he could split the difference here and give me an answer in the negative. But he had to know he was misleading me and the committee and the people who were following this controversial nomination."

Durbin says he plans to write to Kavanaugh "and ask that, based on this contradiction in the sworn testimony, that he recuse himself from cases involving enemy combatants."

Michael Ratner represented Guantanamo detainees in a case before Kavanaugh. It was the first case Kavanaugh heard as a judge on the D.C. Circuit. Ratner says if he'd known that Kavanaugh took part in a White House discussion about enemy-combatant policies, "We would have had to discuss whether or not it was strong enough to actually ask him to disqualify himself."

NYU legal ethics professor Stephen Gillers says there are relatively few instances where former government lawyers must recuse themselves as judges, and he does not believe this fits the criteria.

"We have no reason fairly to infer that, even if he was wrong in his answer to Sen. Durbin, he was consciously wrong," Gillers says. He adds, "He's been confirmed — you can't take back a confirmation — so that's final."

Judge Kavanaugh would not comment for this piece. A court spokesperson said in a statement, "Judge Kavanaugh's confirmation testimony was accurate, and Judge Kavanaugh will continue to carefully address recusal issues based on the law and facts of each case."

Yesterday the Washington Post published a lengthy article about Vice President Cheney's role in the policymaking process of the Bush Administration. In this article, you are reported to have participated in a "heated" White House meeting in 2002 about whether U.S. citizens who had been declared enemy combatants should be given access to lawyers. The information in this article was confirmed today by a report on National Public Radio.

These reports appear to contradict sworn testimony you gave to the Senate Judiciary Committee on May 9, 2006 at your nomination hearing. At that hearing, I asked you about the role you played, as one of the President's top White House lawyers, in the selection of William Haynes, a controversial nominee to the U.S. Court of Appeals for the Fourth Circuit and proponent of permissive policies with regard to torture.

I asked: "What did you know about Mr. Haynes's role in crafting the Adminstration's detention and interrogation policies?"

You testified: "Senator, I did not – I was not involved and am not involved in the questions about the rules governing detention of combatants – and so I do not have the involvement with that."

In light of the Washington Post and National Public Radio reports, your sworn testimony appears inaccurate and misleading. You participated in a critical meeting in which the Administration made a decision on whether to extend access to counsel to detainees, an issue that is clearly a "rule governing detention of combatants." By testifying under oath that you were not involved in this issue, it appears that you misled me, the Senate Judiciary Committee, and the nation.

Therefore, I request that you provide the Senate Judiciary Committee with an explanation for this apparent contradiction.

In addition, I request that you disqualify yourself in all pending and subsequent cases involving detainees and enemy combatants. Your lack of candor at your nomination hearing suggests you cannot approach these cases with impartiality and an open mind.

The federal judicial recusal statute, 28 U.S.C. 455, sets forth numerous conditions in which a federal judge must seek recusal. One of these conditions appears to apply to you. It states that a federal judge should disqualify himself in any proceeding "in which his impartiality might reasonably be questioned."

The court on which you serve, the U.S. Court of Appeals for the District of Columbia Circuit, has exclusive jurisdiction to hear cases under the Detainee Treatment Act and Military Commissions Act. I hope you will recuse yourself in cases involving these and other statutes that come before you during your service on this court.

Please respond to this letter at your earliest convenience.