Accessibility links
City Mobilizes In Response To Rape At School Richmond, Calif. finds itself under the unwanted glare of a media spotlight while students, teachers and parents try to heal their community in the wake of last week's brutal assault at a local high school. 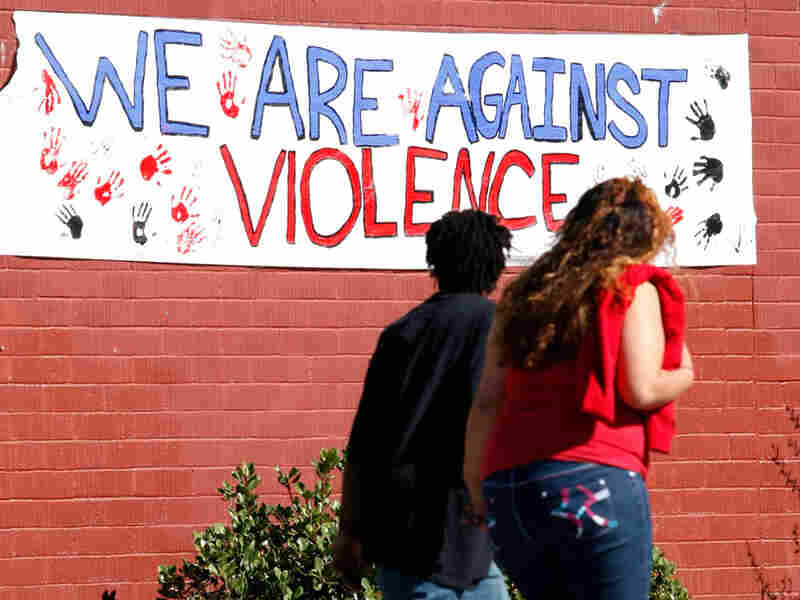 Students walk past a sign protesting violence near Richmond High School in Richmond, Calif. Some students say they are upset about how the school is being portrayed in the media. Paul Sakuma/AP hide caption 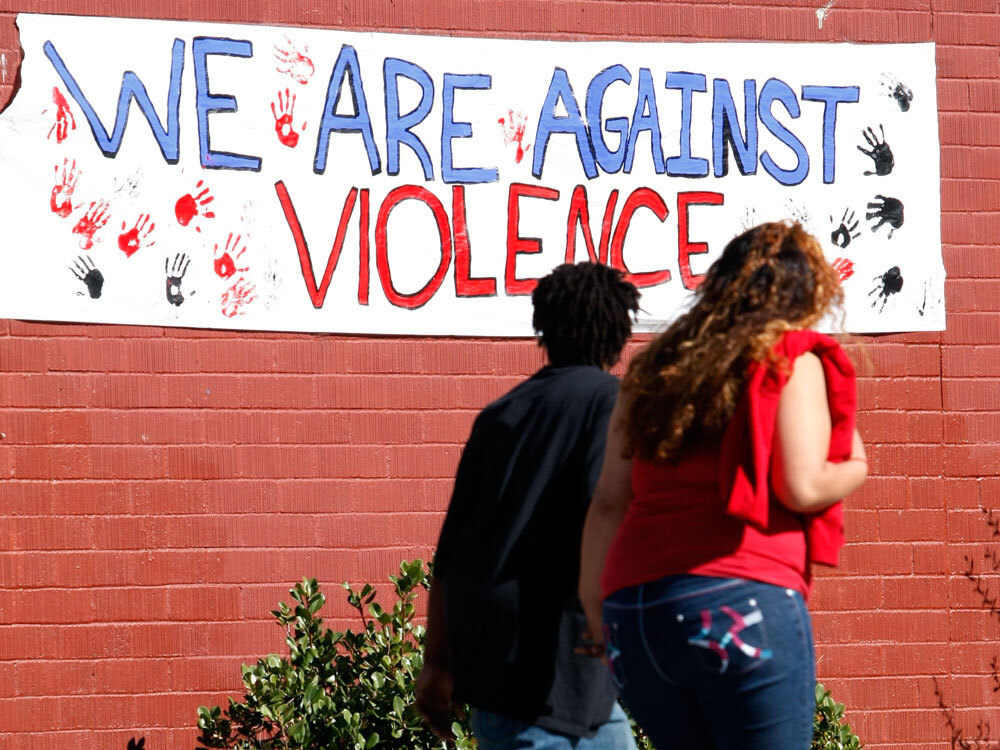 Students walk past a sign protesting violence near Richmond High School in Richmond, Calif. Some students say they are upset about how the school is being portrayed in the media.

Details of Saturday's two-hour assault in Richmond, Calif., shocked even the most seasoned police officers. Richmond police say as many as 10 people may have participated in the gang rape of a 15-year-old girl in this northern California city, while a dozen or more watched without calling police.

The victim was attacked in the Richmond High School courtyard after leaving a homecoming dance. So far, six men and teenagers have been arrested in connection with the assault. And police say there will be more arrests.

The crime has caused outrage across the country. Now, Richmond High finds itself under the unwanted glare of a media spotlight. Meanwhile, students, teachers and parents in the city of Richmond, located in the San Francisco Bay area, are mobilizing to try to heal their community.

The high school sits on a main street in the working-class city north of Berkeley. It's a community that's often mentioned only in the context of crime.

This week, students and teachers gathered for a community meeting in front of a painted sign that said: "We are against violence." The tone of the meeting was at times a tribute to the victim, and at times a call to action.

"Women are constantly degraded in our society," says Lorna McClellan, a teacher at the high school. "When are we going to step up, take the challenge and change it?"

But there was also anger from students who feel they've been unfairly portrayed by the media.

"We do care about the young girl that got raped," says high school senior Norma Bautista. "We're showing everyone that we're not criminals, we're not animals — we're not who they say we are."

Bautista says she has worked hard to get here — she's the second person in her family who will graduate from high school. She is accustomed to challenges, and she says she wants people to know that students are mobilizing.

"What we decided here at school [is] to make workshops at our school for young men about domestic violence — and not just young men, but women as well. We're here to better our school."

Tenth-grader Andre Taylor also attended the meeting. He says he went because he knows something needs to change.

"I didn't know the girl so well, but I know of things that happen like this," Taylor says. "And I've had personal experiences where it hasn't happened to me, but it happened to somebody in my family."

Taylor says this incident may be the defining moment of his high school career. He says witnesses who failed to do anything are just as bad as those who were raping his classmate.

The crime took place in a dimly lit courtyard at the school. According to police, the girl left the dance intending to meet her father for a ride home. Instead, she joined a group of teens who were still on the school grounds. Investigators say she drank a large amount of alcohol just before the assault began.

Community members say there should have been lights and a working security camera in the courtyard.

West Contra Costa County School Board Member Tony Thurmond, who also attended the meeting, says officials are working to fix the structural security problems. But, he says, community-building is the key.

"You can't fence or light every single area in any community, and, at the end of the day, the best way to prevent a crime is how we work with people," Thurmond says. "We have to have a campaign of civility and know that it's not OK to stand by when someone is being hurt and not report that to the authorities."

The Richmond Police Department says there have been signs that students want to cooperate.

"We had officers on the campus the day after, and several people approached the officers and said: 'This is what I'm hearing, this is a rumor, and I want to help with this,' " says Lt. Mark Gagan, a spokesman for the department. "And the officers said these aren't people who usually interact with police well — they are suspicious of police."

Gagan says this crime showed the worst people are capable of; the girl was found in critical condition, though she has since been released from the hospital.

But, Gagan says, the community's response demonstrates that there is also a lot of goodwill in Richmond. He says residents are committed to making sure something like this doesn't happen again.