Accessibility links
Justine Henin: A Hearty Competitor Who is the toughest cookie, the hardest case in sports today? Frank Deford isn't sure that it is some 300-pound demon of a football player or some death-defying racecar driver. 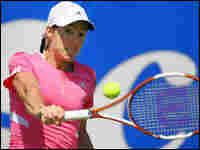 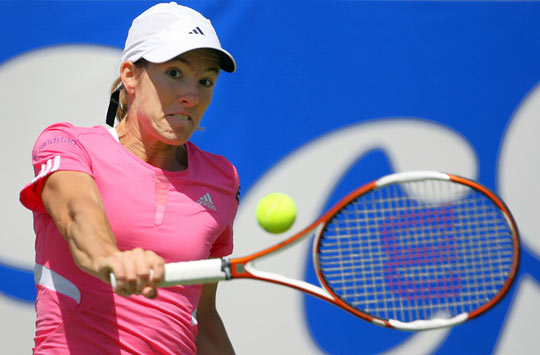 Justine Henin plays a backhand during the quarter-final match against Nicole Vaidisova at the International Women's Open in Eastbourne, southern England, June 21, 2007. Henin won the match 6-2, 6-2.

Who is the toughest cookie, the hardest case in sports today? I'm not so sure that it is some 300-pound demon of a football player or some death-defying racecar driver, but, instead, a little brittle bit of a woman, who, in the old boxing parlance, is pound-for-pound the best — as good as she is determined, as intriguing as she is distant.

The pounds only add up to 125 ... maybe. At five-foot-five, she stands across the net from women who tower over her. She has been a single-minded package of torment. For much of her life she has been a virtual orphan. Her mother, whom she adored, died when she was 12, and soon she was estranged from the rest of her family.

Each year she retreated deeper into her sport, but only as a competitor. She would be alone in the crowded locker room — however briefly she would stay there. Some of her implacable actions upon the court — selfish, they seemed; even unsporting and certainly unladylike — only added to the resentment from her bigger rivals.

But if she would not mix with the players, and if she broke with her family, she did find love away from the game with an early marriage — yet that too has now shredded.

So often has it been Justine Henin against the world, and most often the world has been bested.

Comes now she does to Wimbledon, after winning her third straight French Open. She has also won Grand Slams in the United States and Australia and an Olympic gold.

Four years ago, when she captured her U.S. Open, she did it only a few hours after she won a long, excruciating, come-from-behind semi-final that lasted well past midnight and forced her, in victory, into the hospital, where she needed treatment for exhaustion and dehydration. It was the kind of epic courage that many men would never credit a woman.

At a time when athletes, men and women alike, loom taller and more muscular, Henin is like some throwback to another time. So too, in her sport, in an age of two-handed backhands, her one-handed shot: she strikes it with a power and glory that seem even to overwhelm the memory of backhands past. It is as beautiful as it is devastating, even more classic than Roger Federer's.

What makes Henin even more interesting right now is that she is trying to open up and find a joy that her coach says he has not seen in her since she was 11 years old — before her mother died. Since the break-up of her marriage earlier this year, Justine has turned back to her family, reunited with her father and her brothers and sister.

Her game is not best suited to grass, but she has twice gone three sets before losing in the finals at Wimbledon — the only major championship she has not won. Now, contentment does not necessarily equate with victory. In fact, all sorts of athletes with personal troubles have found sanctuary upon the field of play.

A whole heart doesn't necessarily make up for a weak second serve. Still, should Justine win Wimbledon and complete the cycle of Grand Slam championships, it would not be so much a happy ending as it would be a new chapter.