Accessibility links
A Four-Corners Fourth A truly American feast should showcase celebratory foods from each corner of the United States, says April Fulton. She shares a Fourth of July menu that spans the tastes of New England, the South, the Southwest and the Northwest. 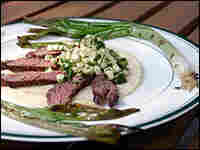 Carne Asada — the marinated, grilled meat of Mexico and the Southwest — provides a hearty core to a Fourth of July menu that spans the United States' four corners. April Fulton hide caption 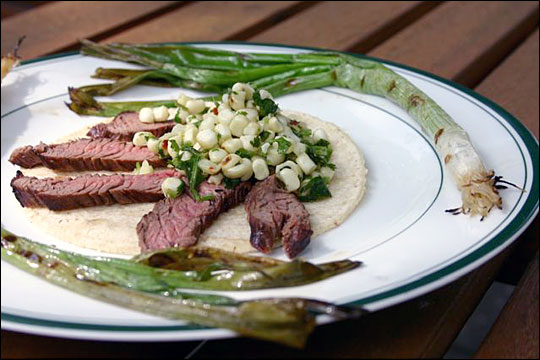 Carne Asada — the marinated, grilled meat of Mexico and the Southwest — provides a hearty core to a Fourth of July menu that spans the United States' four corners.

April Fulton is a freelance writer in Washington, D.C., specializing in health care and food. Her freelance work appears in The Washington Post, Bethesda Magazine and Washington SmartCEO Magazine.

Cooking for friends on the Fourth of July can be as easy as slapping some hot dogs and hamburgers on the grill and icing beer — or as complicated as slowly smoking a side of beef all day and serving it with pitchers of Tom Collins. I've done both with pleasure.

This year, however, I decided that a truly American feast should showcase celebratory foods from each region of the United States. Our cuisine reflects a culture rich in history borrowed from others, plus a dash of our own invention. It just requires a little planning to pull off a meal that touches all four corners.

I grew up in Rhode Island, where no proper summer party starts without steamers. Tender, native littleneck clams are best, although cherrystones work in a pinch. Native Americans probably were the first to pull these beauties out of the ocean and cook them over an open fire, but the English exiles, who boiled much of their food to death, probably added the water and the butter sauce.

You can doctor up the butter sauce any way you like, but the sweet little clams have a pure, briny taste that stands on its own.

These are easy appetizers that can be prepared at the last minute and served as guests settle in with a seasonal summer brew.

I swing down south to New Orleans for my vegetable. Okra is an acquired taste, yet essential in New Orleans cooking. The ridged green pods are crisp-tender outside, but somewhat viscous when cooked. Okra was a staple of African slaves who brought it to America, where it was quickly adopted as a thickener for the classic Creole stew known as gumbo.

I use a recipe that tempers okra's unusual texture with the more familiar taste of a chunky tomato sauce and gives skeptics a good introduction to the vegetable. Choose young, bright green pods, not the woody, browning old ones, or your guests will be picking sticks out of their teeth and never want to try okra again. Ginger is my unorthodox addition, and gives the dish a bit of a zing.

Turning west for my main course, I was inspired to use the abundant fresh corn this time of year and spice it up, Southwestern-style. I developed a simple recipe for corn-cilantro salsa to accompany carne asada, the marinated, grilled meat of Mexico and the Southwest. It is usually skirt or flank steak, prepared in a simple marinade or rubbed with salt and spices, and cooked quickly over a hot fire. Then it can be spread over warm tortillas or served with rice.

I marinated the steak in a combination of citrus fruits and a little tequila to give it some bite. I use warm corn tortillas to complement the corn salsa, and include a simple but wonderful treat — grilled whole scallions — to go on the side.

Finally, no Fourth of July celebration would be complete without berries bursting in their beautiful, finger-staining glory. And in simple blackberry cobbler, no matter how juicy the berries, there's no bottom crust to get soggy, as it might in a pie.

While grown all over the United States, Oregon blackberries are tops in my opinion. Wild blackberries were discovered in the Northwest, picked and canned by homesteaders. They attracted little commercial interest because of their thorns, according to the Oregon Blackberry and Raspberry Commission, until Philip Steffes of Sublimity, Ore., found a thornless plant nearly identical and just as productive as the wild ones.

When dinner's done, all that's left to do is take in the local fireworks display on a full stomach.

It's good to be an American. 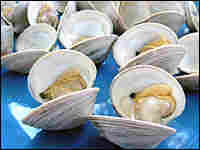 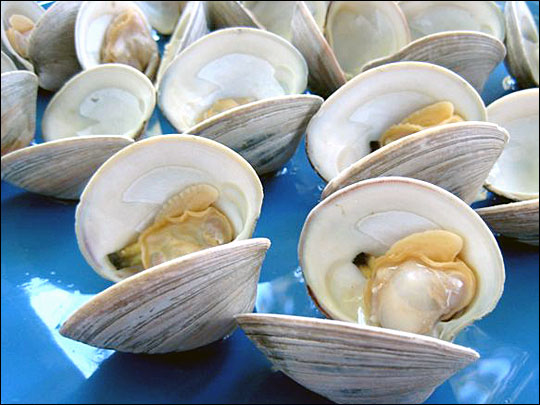 This is the way we've always made steamers in my family. The amounts are approximate and can be easily doubled or tripled to feed a crowd or even served as a main course with a side salad and some fresh corn on the cob.

Bring water to boil in a large pot.

Melt butter and add lemon juice and hot sauce to taste. Strain out milk solids if you like. Set aside to cool slightly.

Scrub clams with a brush to remove sand and grit. Drop in boiling water and cook, uncovered, 5 to 10 minutes, scooping out as they open and setting aside in a large, shallow bowl. Reserve 1 cup of water in which clams were boiled.

To eat, remove "beard" covering neck if using littlenecks. Dunk finished clams in reserved hot water to ensure grit is gone. Then dip in butter sauce before popping them in your mouth immediately. 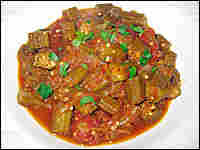 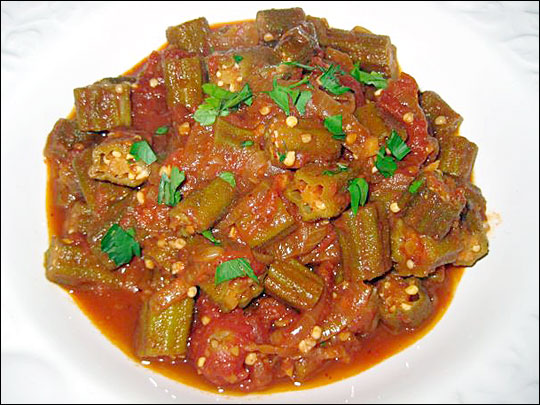 This recipe is adapted from Rima and Richard Collin's The New Orleans Cookbook (Alfred A. Knopf, 1997 ).

Add the drained tomatoes and continue to cook, breaking up the tomatoes with a wooden spoon as they soften. Stir in mustard.

Cover and cook over low heat for 30 minutes, stirring occasionally.

May be prepared one day ahead and reheated, or eaten cold as an appetizer. 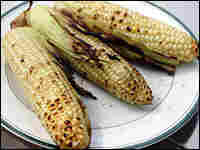 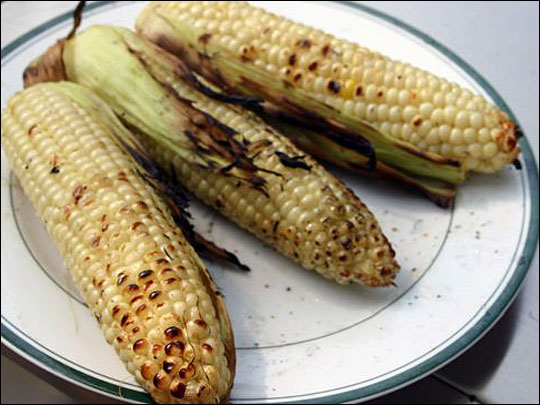 I developed this recipe while pondering ways to use up an overabundance of citrus fruit shipped from Florida. The three kinds of citrus give the marinade a refreshing summery tang.

1 bunch of scallions, washed well but not trimmed

1 1/4 pounds skirt steak, sometimes called fajita steak (may substitute flank, but the fat in skirt is where the flavor is)

Mix together the citrus juices, tequila and jalapeno to make the marinade. Place steak and onions in a glass casserole dish or other nonreactive pan, pour marinade over meat and whole onions and refrigerate covered about 4 hours, turning occasionally.

Preheat grill to high. While the grill is heating, take the steak and marinade out of the refrigerator and bring to room temperature. Remove steak from marinade and grill about 10 minutes a side, depending on size and thickness. Let rest a few minutes, then carve against the grain into thin slices.

Grill onions while steak is cooking, about 5 minutes total, but take care not to burn. Set aside.

Meanwhile, preheat oven to 300 degrees F, wrap the tortillas in foil and heat until warm. Reserve.

Zest and juice of one lime

Strip away corn silk but leave some husk intact. Brush ears all over with canola oil, sprinkle with salt and pepper, and grill on medium high for 7 to 10 minutes, turning frequently, until kernels begin to char. Remove and set aside to cool.

Combine rest of ingredients in a medium bowl. When corn is cool enough to handle, slice off cob, mix with other salsa ingredients and refrigerate until needed.

To serve, top each tortilla with several slices of meat and a scoop of corn salsa; place a grilled onion on the side. 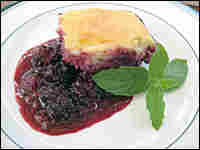 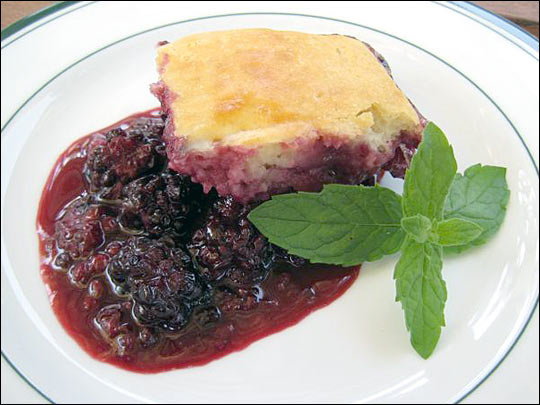 This is adapted from a recipe on the Oregon Raspberry and Blackberry Commission's web site, www.oregon-berries.com.

In a 10-to-12-inch glass pie plate (or 2-quart baking dish), mix together the berries, sugar, flour and the kirsch or lemon juice, if using. Bake berries in the oven for 30 minutes, stirring once during baking. After 30 minutes, remove berries from the oven and make the biscuits.

In a medium-sized bowl, stir together the flour, baking powder, soda, salt and sugar. Cut the butter into the mixture with two table knives until butter is the size of corn kernels. Stir in the buttermilk just until the mixture is just moistened. With a large wooden spoon, drop six large mounds of the dough over the fruit in various places.

Bake for 20 minutes until dough puffs up and turns golden like biscuits.