Accessibility links
Digging Up the Past, in More Ways Than One The High Strung's "Gravedigger" seems to condense the entirety of The Who's Meaty Beaty Big And Bouncy into a single song. It shows both a rich appreciation for the finer points of The Who and a sharper streak of originality by capturing the band's weirdness.

Digging Up the Past, in More Ways Than One

Digging Up the Past, in More Ways Than One 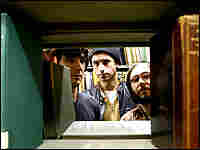 The High Strung emulates The Who without losing sight of its own ideas. Craig W. Bengry hide caption

It must be tough for a band with a gleeful love of its record collection and an abundance of hyperactive ideas. If one isn't providing the overwhelming temptation to spit out slavish rehash after slavish rehash, the other often walks hand-in-hand with the philosophy that self-editing is for the artistically compromised.

But occasionally, the result is more like The High Strung on "Gravedigger," which seems to condense the entirety of The Who's Meaty Beaty Big And Bouncy into a single song. The guitars crunch and jangle simultaneously, with an acoustic guitar subtly adding weight. The drums pop and provide a mod underpinning. The bass thumps and whoops like "I'm A Boy" and "Happy Jack" before an Entwistlian climb at the end of the chorus.

Better still, The High Strung shows both a richer appreciation for the finer points of the early Who and a sharper streak of originality by nailing the weirdness that lay at the core of many of Pete Townshend's songs. The title character, bored and frustrated with his work, toys with the facts of his charges' lives before learning that he may be next. By then, it's too late for poor Lisa Gorn, whose existence has been eradicated altogether. But at least she gets sung into oblivion in majestic harmony.

Album
Get the Guests
Artist
The High Strung