Accessibility links
Fallout from Bad '70s Idea: Auto Tires in Ocean Reef Divers are beginning to remove some 2 million used auto tires that were dumped into the Atlantic Ocean, off the Florida coast, in the 1970s. The move was intended to create an artificial reef to promote sea life, but the tires became an environmental blight. 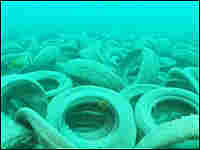 Some 2 million tires were dumped off the coast of Fort Lauderdale, Fla., in the 1970s, in an effort to create an artificial reef. Three decades later, military divers have begun removing the tires. Courtesy of Navy Combat Camera Dive Ex-East hide caption 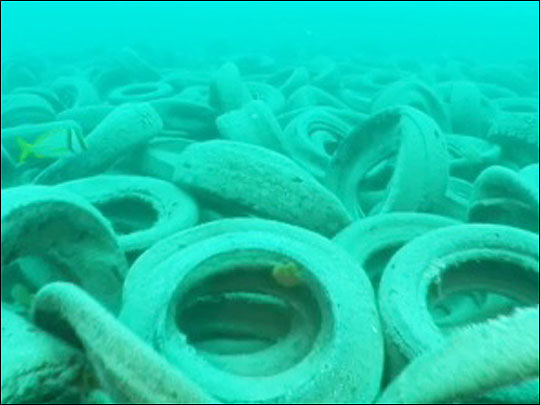 Some 2 million tires were dumped off the coast of Fort Lauderdale, Fla., in the 1970s, in an effort to create an artificial reef. Three decades later, military divers have begun removing the tires. Courtesy of Navy Combat Camera Dive Ex-East

It seemed like a good idea at the time. In the early 1970s, a group of fishermen organized a campaign to dump 2 million used auto tires into the Atlantic Ocean, about a mile off the coast of Fort Lauderdale, Fla., between two living coral reefs.

The goal was to build an artificial reef that would promote sea life. But it had the opposite effect: The mass of tires became an underwater blight.

William Nuckols, with Coastal America, the federal office that is helping coordinate a cleanup of the tires, says the original goal was a good one.

"The original intention," Nuckols says, "was to try to provide a fish habitat and add to the natural coral reefs that were there."

Broward County and the Army Corps of Engineers approved the plan to bundle and drop millions of tires overboard.

"Over time," Nuckols says, "the bundles they put together broke apart, as hurricanes and other large coastal storms came through, which you have a lot of here in South Florida. And those have pushed the tire mass onto the middle reef, essentially denuding that one, eliminating all the corals from that one. In the main area, where the tires are, there's really no significant coral growth at all."

Environmentalists have spent decades wondering how to remove the old tires. Now, county, state and federal authorities have come up with a plan.

'Just Tires for as Far as You Can See Down There'

At a Coast Guard base in Dania Beach, Fla., 40 Army, Navy and Coast Guard divers unload their gear from boats, after spending the day pulling up tires from the sea floor. The area where they've been working is about 70 feet down, and covers 34 acres.

"You get down about 20 feet," says Army Diver Jason Jakovenko, "and it starts to come into sight. ... It's like the moon or something. It's weird. It doesn't look like anything you can imagine. It's just tires for as far as you can see down there."

Jakovenko says this assignment has been a pleasure, compared with repairing dams, doing salvage work, or diving in 38-degree water in Alaska.

For two weeks this month, the military divers worked to remove tires from the area where they've done the most damage, scrubbing most of the sea life off what once was a living reef.

Jakovenko says the divers have been able to bring up about 1,000 tires a day, using wire cables and lift balloons filled by air tanks.

For years, county and state officials wanted to remove the tires, but didn't have the estimated $30 million it would take to hire private contractors. Enter Coastal America, the small federal office where Nuckols is a project coordinator.

Coastal America's job is to bring federal agencies together on large marine projects. A key to this project was the military's agreement to use it as a training exercise, donating the time and expertise of its divers. Nuckols says the final piece fell into place when Florida allocated $2 million to cover the cost of transporting and recycling the tires.

"So we're accomplishing this for $2 million," Nuckols says, "and saving essentially the taxpayers $28 million in the process, just by reorganizing government in a more efficient way."

There may be no one happier about the progress in cleaning up Florida's tire reef than Ken Banks, a marine biologist with Broward County's Department of Environmental Protection.

The work carried out on the reef this month is just the beginning of a project that's expected to take three to five years. Even then, many tires will remain. But Banks says those that do the most damage will be gone, and the coral reefs can begin to come back. It's a process that will take a long time.

"Hard corals take many, many years to grow," Banks says. "So, it's going to take a long time for those organisms to resettle back onto that reef and grow up to their typical size. So, I think it will take decades for that reef to recover."

Banks says in some other areas, tires have been used successfully in reefs where they've been anchored to concrete and not likely to drift. He says the lesson from Florida's experience is, before undertaking a massive project like an artificial reef made out of 2 million tires, first be sure that it works.