Accessibility links
Want the iPhone? There May Be a Hitch Apple's new iPhone will be in stores on Friday, but most cell phone customers won't be able to use it because of an exclusive deal with AT&T. Roughly 140 million users will be shut out unless they switch carriers, something that could be costly.

Listen
Want the iPhone? There May Be a Hitch

Apple's new iPhone will be in stores on Friday, but most cell phone customers won't be able to use it because of an exclusive deal with AT&T. Roughly 140 million users will be shut out unless they switch carriers, something that could be costly.

And now, shocking, shocking news that I'm sure you haven't heard anywhere else. Apple's iPhone goes on sale this Friday. The potential for Apple is huge. The cellphone market is worth about a billion phones a year. The hype is huge too. But as NPR's Wendy Kaufman reports, buying and enjoying the iPhone will not be easy.

WENDY KAUFMAN: For the uninitiated and those who've missed the TV ads, the iPhone is a stunningly slim, elegantly designed combination iPod, Internet communications device and mobile phone. And in classic Apple fashion, it's been marketed to the max.

Unidentified Man: This is how you turn it on. This is your music.

KAUFMAN: This ad, for example, touts the ease of using the touch screen display for things such as listening to music or sending e-mail.

KAUFMAN: Making sure that call and all the fancy features of the device work as promised is Apple's first challenge. Then there's the matter of price. iPhones are expensive, $500 to $600 depending on the storage capacity. Add to that the service fee. The least expensive plan is $60 a month. And another challenge...

Mr. MICHAEL GARTENBERG (Analyst, Jupiter Research): Certainly for the foreseeable future, if you want an iPhone you're going to have to be an AT&T customer as well.

KAUFMAN: That's right. As Michael Gartenburg of Jupiter Research explains, Apple and AT&T, formerly known as Cingular, have an exclusive deal that limits iPhone's service to those on the AT&T network. That means that roughly two-thirds of all current U.S. cellphone users, roughly 140 million people, will be shut out for at least two years. If they want an iPhone, they'll have to switch carriers.

And Charles Golvin of Forrester Research says most people won't; breaking the contract can cost $175 or so.

Mr. CHARLES GOLVIN (Forrester Research): It's relatively a small percentage of people who will - are so hungry for a new phone or relationship or so dissatisfied with their current provider that they're willing to eat that cost.

KAUFMAN: Another hurdle: The speed of the AT&T network itself. Golvin says it's not fast enough to handle many of the iPhone's coolest features.

Mr. GOLVIN: So that means that the promise of this mobile Internet and browsing on the go, it's going to fall so much short of what some people I think might hope for just because the network that's feeding the Internet content to the phone is fairly slow.

KAUFMAN: And what about e-mail? Some users will be put off by the iPhone's lack of a conventional keyboard. Rather than striking keys, there's a visual keyboard that you touch.

Tim Bajarin, president of the research and consulting firm Creative Strategies, cites another more significant e-mail problem, this one faced by many corporate customers.

Mr. TIM BAJARIN (President, Creative Strategies): The iPhone today will not support corporate e-mail, and specifically Microsoft Exchange server, and there's going to be going to be some frustration with that audience who clearly would love to have that phone but yet that feature and function will be available for it.

KAUFMAN: Apple plans to sell about 10 million iPhones by the end of next year, a figure most analysts say is realistic. No one believes the iPhone is likely to garner the 80 percent market share that Apple's iPod now has.

But the company's move into mobile phones is highly significant. Competitors are now working harder than ever to make their own super-smart musical cellphones, and the dynamic will forever change what we think of in a cellphone.

BROOKS: And you can check out our list of seven things to consider before buying an iPhone at npr.org. 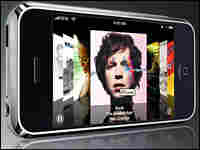 Apple's iPhone isn't even for sale yet, but already, consumers are lining up to purchase the gadget. But do you really need the iPhone? Here are seven factors to consider before you buy:

1. The Cool Factor: As is true for many other Apple products, the iPhone's biggest "I want that" factor is its sleek styling. "If you love Apple, you love their gadgets, you have an iPod, you'll be one of the first in line," says Kent German, senior editor for cell phones at CNET.com, a technology news and reviews site.

The most eye-catching detail is, of course, the touch screen interface. You use your fingertips to access all of the iPhone's features: the music player, Web browser, calendar, etc. And of course, there's no keyboard, so to send e-mails, you'll need to get used to typing on a touch screen. "It takes practice," says New York Times technology columnist David Pogue, who has already tested out the iPhone.

2. Multimedia Mojo: It's a cell phone, it's a music player, it's a camera, it's a Web-enabled device, and much more. Ask yourself if you really need all that high-tech bling. (According to Forrester Research, most consumers say that what they want in a cell phone is that it actually work, last long and be easy to use.) If the answer is yes, then you should know that, according to Pogue, the video capability is "spectacular."

German notes that while other cell phones also offer an mp3 player, the iPhone is the only one that syncs automatically with iTunes, the world's most popular music-download system. Of course, you do have to buy the song on your computer first, then transfer it to the iPhone.

3. Interacting with the Office: Then there's the straight-laced stuff to consider, such as how well you can work on the iPhone. If you're a BlackBerry user who's always sending e-mails back and forth while away from your desk, getting used to the keyboard-less typing could take some time. "You'll really want to test that process before buying," German says. He notes that it's not yet known how well the iPhone will work with corporate servers to access e-mails and address books, or how it interacts with other computers. "If it does that well, then we might see a larger business audience," he says. But for now, he says, "Apple is certainly positioning this device for multimedia, for listening to music, for taking photos and for surfing the Web."

4. Internet Ease of Use: Because the touch screen essentially spans the length of the iPhone, users will get a wider viewing area than what the typical Internet-enabled phone offers. And the browser renders Web pages in full html — which means sites will look as they do on a regular computer.

Speed is another issue altogether. In wireless hot spots, Pogue says, getting online is a breeze. Otherwise, you're forced to rely on AT&T's wireless network — and that can make you "long for the days of a dialup modem," Pogue says.

5. Cell Phone Carrier: The iPhone can only be used with cell phone service from AT&T. "AT&T is the largest carrier," German says. "It has a very widespread network. It has the largest number of customers. So it is a natural choice for Apple."

Still, roughly two-thirds of U.S. cell phone users don't use AT&T. And Pogue says his biggest gripe with the iPhone is AT&T's wireless cell phone and Internet service, which he calls "not good." If this is an issue, take heart: German notes that a strong debut for the iPhone could possibly prompt Apple to adapt it to work with other cell phone service providers.

6. Price: The iPhone will set you back $499 for the 4-gigabyte model, and $599 for the 8-gigabyte version. Beyond that, there's the service plan to consider. AT&T announced this week that its iPhone service plans will start at $59.99 a month, with a minimum two-year contract. There's also a $36 activation fee. And if you have to switch service providers, you may have to pay an early-termination fee as well.

7. Other Options: If you're ready to spend at least $500 for a cell phone, what else should you consider? In the $500 to $800 price range is the Prada-branded cell phone from LG and the HTC Touch; both also feature a touch screen. German says the Nokia N95 is a "really powerful smart phone" with a 5-megapixel built-in camera (the iPhone's camera is 2 megapixels); it also has a music player, e-mail capabilities and "other productivity applications." And if what you want is a phone that does double-duty as an mp3 player, Sony Ericsson, Motorola and Nokia all have phones that fit the bill.