FOX News anchor Brit Hume surfaced in CIA documents revealed this week. Hume once worked with Pulitzer Prize-winning columnist Jack Anderson and shows up in the documents as "Eggnog." The documents show that the CIA surveilled Anderson, Hume and other journalists in 1972. Hume talks with Madeleine Brand.

Download the 700-page Family Jewels documents containing "responses from CIA employees to a 1973 directive from Director of Central Intelligence James Schlesinger asking them to report activities they thought might be inconsistent with the Agency's charter," as defined by the CIA. 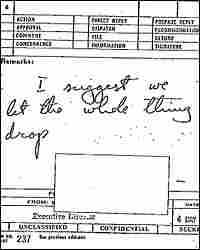 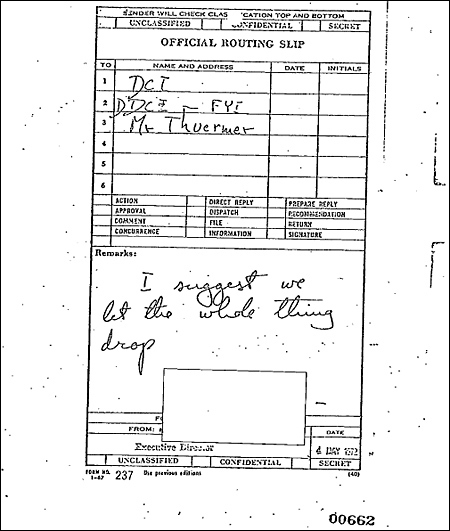 A memo to Director of Central Intelligence Richard McGarrah Helms, CIA Deputy Director Lt. Gen. Vernon Walters and Angus MacLean Thuermer, assistant to the director. Although the subject is unclear, the date suggests it was written by Executive Director Lawrence K. 'Red' White.

View the CAESAR-POLO-ESU papers including CIA analysis and research on Soviet and Chinese leadership, and Sino-Soviet relations, from 1953 to 1973. 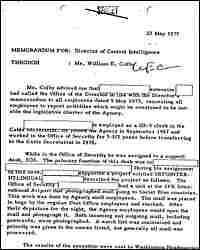 A May 22, 1973, memo to the director of Central Intelligence refers to an earlier note "requesting all employees to report activities which might be construed to be outside the legislative charter of the Agency." Declassified CIA Memo hide caption 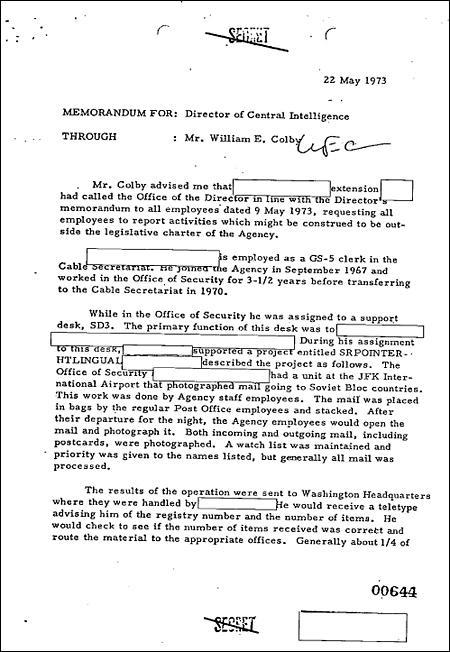 A May 22, 1973, memo to the director of Central Intelligence refers to an earlier note "requesting all employees to report activities which might be construed to be outside the legislative charter of the Agency."

After more than a 30-year wait, the CIA has finally released a five-inch thick stack of papers known as the "Family Jewels" – an internal accounting of some of the spy agency's dirtiest secrets, including assassination plots, secret drug experiments and domestic surveillance.

The folder that came to be known as the "Family Jewels" was born in 1973. James Schlesinger had just arrived at Langley, as the CIA's new director. Schlesinger was alarmed by reports of CIA complicity in the Watergate scandal, so he sent out a memo directing CIA staffers to tell him about any operations, "outside the agency's legal charter."

"I was actually overseas at the time," he said. "We all received a cable that says, 'if you know anything deep and dark, we should tell him.' It was a moment, in the CIA - when people were saying, 'well, what's this all about?'"

It was about kidnapping, assassination plots, illegal surveillance of American journalists and Vietnam war protesters. The memos that answered Schlesinger's request detailed CIA operations dating back to the 1950s. Until now, they were classified and closely guarded inside the agency.

CIA spokesman George Little said his boss, current CIA Director Michael Hayden, decided it was time to put the information out there - even if does not paint the agency in a flattering light.

"It is part of the CIA's history. And the documents reflect that," he said.

There is a lot the documents don't reflect: 15 percent of them are completely whited out, and many of the remaining documents are heavily edited.

James Bamford, who has written extensively about U.S. spy agencies, said it is ironic that in the 1970s, people were aghast as word of CIA misdeeds leaked out

"But now, looking back, it seems so minor compared to what the CIA is doing today," Bamford said.

"They have a whole section … on how the CIA held a Russian defector in a jail that was created by the CIA, a mini-prison for this person," he said. "Now, you have the CIA keeping people in prisons all over the world"

"It's important to note that CIA activities now undergo much more rigorous review, not only within the agency, but also by other entities within the [government] and congressional oversight mechanisms that were established in the 1970s," he said.

However, Milt Bearden, the retired CIA spy, said he sees a disturbing trend. For him, it is a pattern of interaction between the CIA and the White House that began early on, and - he says - continues today.

"Every one of these activities that are called the 'Family Jewels' was at the direction of a president," Bearden said. "If I see a lesson coming out of this, it's that the CIA has been abused by so many administrations, going all the way back to Eisenhower and Kennedy and everybody since."

Another CIA veteran, Richard Kerr, said he fears the release of the documents will raise questions all over again, about the CIA operating as a rogue agency.

Kerr argued that releasing a chronicle of past misdeeds without this necessary context will spell trouble for the CIA.

That is a concern; however, the CIA does not seem too concerned about. A CIA spokesman said the agency's director is committed "to the extent that we can, he's willing to share information - both historical and recent - that ... would be of interest to Americans."