Accessibility links
Putin Has Defied Expectations of a Short Reign Vladimir Putin quickly overcame his status as a relative unknown when former President Boris Yeltsin appointed him prime minister of Russia in August 1999.

Putin Has Defied Expectations of a Short Reign

Putin Has Defied Expectations of a Short Reign 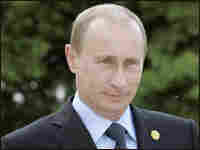 Tensions between the United States and Russia have flared in recent months. Read more about the relationship between the countries and their leaders since the end of the Cold War. 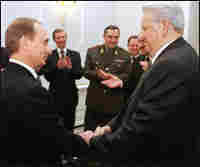 Although the Russian constitution requires President Vladimir Putin to step down when his two-term limit expires in March 2008, few expect he'll give up power.

His supporters say his more-than-80-percent approval ratings give him the "moral duty" to become the country's so-called national leader. Putin has indicated he may become prime minister under what many believe would be a loyalist installed as a figurehead president.

That's something opposition figures say would seal the return of one-party authoritarianism to Russia.

Putin came to international attention in August 1999, when former President Boris Yeltsin appointed him prime minister of Russia. He had worked in the country's intelligence agencies, first in the Soviet KGB, serving as an officer in East Germany during the 1980s, and eventually as head of Russia's Federal Security Service (FSB), a successor to the KGB.

Most saw Yeltsin's appointment of an unknown bureaucrat to head the country as a last-ditch attempt to find a potential successor to run in presidential elections the following year. Yeltsin was seriously sick and largely out of public sight at the time of the appointment. The Kremlin was under constant attack from rival politicians jockeying for the presidency — and few believed Putin would last in office long. But the prime minister defied expectations, holding tight to the top post.

Shortly after his appointment, Putin's tough rhetoric helped swell public support for a renewed military campaign in Chechnya. Rebels from the breakaway Caucasus Mountains region of Chechnya staged an attack on the neighboring Russian region of Dagestan. Soon after, Russian forces launched their second war against the separatists.

At the same time, the government blamed a series of mysterious apartment building bombings on Chechens, further increasing public support for the fighting.

Speaking of the Chechen rebels, Putin famously promised to "rub them out in the outhouse." By late fall, Putin's once dismal public approval ratings were skyrocketing.

On New Year's Eve 1999, Yeltsin appeared on national television to announce his surprise resignation and the appointment of Putin as acting president. The new post virtually assured Putin victory in presidential elections the following March.

Russians saw their sober-looking new leader as a welcome alternative to the unpredictable Yeltsin. They especially approved of Putin's promises to restore Russia's great power status after a decade of humiliating post-Soviet poverty and corruption.

The sinking of the Kursk nuclear submarine in August 2000 and the death of its entire crew did nothing to dent Putin's ratings, even after he failed to react by continuing a vacation.

The Value of Loyalty

Putin lost no time cementing his grip on political power. He reformed the upper house of parliament, removing the powerful regional governors who sat there ex-officio and replacing them with Kremlin appointments. Tax police launched raids and prosecutors began probes into Russia's biggest companies, some belonging to the country's most influential businessmen, the so-called oligarchs. Putin's message was clear: Show loyalty to the Kremlin or face an uncertain future. Most did and were left alone.

Vladimir Gusinsky was among those who didn't show loyalty. Before Putin's election, the banking and media tycoon had helped finance the Kremlin's main opponents, powerful Moscow Mayor Yuri Luzhkov and his partner, former Prime Minister Yevgeny Primakov. The president responded once he was in office. Gusinsky was jailed on fraud charges. His media holdings — some of the country's top independent outlets, including NTV television, the Segodnya newspaper and Itogi magazine — came under pressure. All eventually fell under the control of Kremlin-friendly organizations.

Putin also attacked those who helped put him in office. Chief among them was oil and media tycoon Boris Berezovsky, the Kremlin's top power broker. Berezovsky is believed to have helped choose Putin for prime minister, and he went on to promote the future president on Russia's biggest national television network. But after Putin's election, the two fell out over Berezovsky's reported attempts to control the Putin. Berezovsky fled into self-imposed exile in London. His oil and media assets ended up in pro-Kremlin hands.

Putin also set about appointing former KGB colleagues to high posts in government and business. Many came from his hometown, St. Petersburg, and have been seen as unquestionably loyal to Putin.

Putin's first major crisis came in October 2002, when Chechen rebels took about 800 people hostage in a Moscow theater. He responded with his usual toughness. Security forces overcame the rebels by pumping a mysterious chemical gas into the theater. More than 120 hostages were killed in the operation.

But despite his crackdown against democracy and the independent press, most Western observers lauded Putin as an economic reformer doing his best to clean up Russia's endemic Yeltsin-era chaos.

A Shift in Image

That image began to change in October 2003, after the arrest of billionaire Mikhail Khodorkovsky on charges of fraud and embezzlement. Khodorkovsky had been Russia's richest man running the country's biggest oil company. Kremlin critics say Putin saw him as a political threat. Khodorkovsky was eventually sentenced to eight years in jail. The main assets of his Yukos oil company were sold to a state-controlled company in a shady closed auction, the first major step in the Kremlin's drive to put the country's energy industry under state control.

In parliamentary elections in December 2003, the pro-Kremlin United Russia Party cemented its control over the legislature. And for the first time, the country's liberal parties lost their seats in voting that the Organization for Security and Cooperation in Europe deemed not free and fair. Putin himself was easily re-elected in March 2004.

Crisis hit Russia again in September 2004, when Chechen separatists took more than 1,000 people hostage in a local school in the Caucasus town of Beslan. About 330 hostages died during a botched rescue operation three days later. Some witnesses said security forces started a gunbattle with the militants and fired grenades into the school. After the siege, Putin abolished elections of the country's governors in favor of Kremlin appointments.

By 2006, high global prices for oil — Russia's top export — were flooding the treasury with billions of dollars. The good fortune enabled Putin to repay Russia's foreign debts early and to begin throwing around Moscow's weight on the world stage. In January 2006, Russia cut natural gas supplies to Ukraine during a price dispute. The disruption affected supplies to Europe during a bitter cold spell and prompted fears of an energy crisis. In September 2006, Moscow cut off all transportation and trade ties with the former Soviet republic of Georgia and deported hundreds of Georgians after officials in Tbilisi briefly arrested four Russian military officers on espionage charges.

Signs of a Trend Away from Democracy

Russia's image as a country that had swerved off its path to democracy was cemented after investigative reporter and top Kremlin critic Anna Politkovskaya was shot dead in her Moscow apartment building in October 2006. Putin dismissed Politkovskaya's work as insignificant and blamed her death on Russia's ill-wishers.

In November 2006, another prominent Kremlin critic, former KGB officer Alexander Litvinenko, died in London from radioactive polonium-210. On his deathbed, he blamed Putin for ordering his poisoning, something the Kremlin strongly denied.

Relations with the West went from bad to worse, hitting their lowest level since the Cold War. Putin has accused Western countries of meddling in Russia's affairs.

During a security conference in Munich in February 2007, Putin blamed Washington for increasing tension and violence around the world. Soon after, he implicitly compared the United States to Nazi Germany.

Russia is especially upset over Washington's plans for a missile defense system with some installations in Europe, which Moscow says is a threat to its national security. In response, Putin has threatened to point Russian missiles at sites in Europe, and he's suspending Russia's observation of a key arms agreement called the Conventional Forces in Europe Treaty.

Having brought back a large measure of Soviet-era controls on Russian life, overseen the rise of a booming state-controlled oil and natural gas economy, and reignited a confrontation with the West, Putin threw his weight behind the pro-Kremlin United Russia Party ahead of December's parliamentary elections. He became the party's top candidate — even while refusing to become a party member — and in extensive appearances on state-controlled television, denounced his critics for seeking to split Russia apart. Opposition groups say they have been denied media coverage and harassed by the authorities.

Many believe Putin will use the election results to justify his plans to hold on to power from whichever office he chooses to occupy, but that he'll keep the country guessing about his intentions until the last minute.

Whatever his future, there's no question Putin has stamped his name on the course of Russian history.