Accessibility links
Tensions Rise in U.S.-Russia Relationship Putin's vehemence toward the West has ballooned this year. But Russia's decade-long post-communist honeymoon with the United States ended in 1999, the year NATO bombed Yugoslavia over the breakaway province of Kosovo. 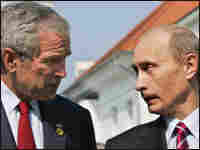 Russian President Vladimir Putin is due to step down in March 2008. Read about his years in power. 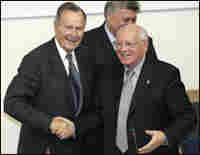 Observers of Russia would be forgiven if they believed it's the height of the Cold War.

President Vladimir Putin recently accused Western countries of "poking their snotty noses" in the parliamentary elections campaigns. Diplomatic relations with Britain over the poisoning of KGB officer Alexander Litvinenko have all but broken off. And earlier this year, Putin implicitly compared the United States to Nazi Germany before saying American actions during the Vietnam War were worse than the repressions of Soviet dictator Joseph Stalin.

Putin's vehemence toward the West has ballooned this year. But Russia's decade-long post-communist honeymoon with the United States ended in 1999, the year NATO bombed Yugoslavia over the breakaway province of Kosovo.

Moscow's reaction was a far cry from its initial embrace of Washington during Soviet leader Mikhail Gorbachev's perestroika — when decades of Cold War antagonisms melted within months — or the euphoria of the Soviet collapse in 1991, when many Russians believed they would soon be living like their Western counterparts.

Kosovo Marks a Shift in Thought

Russians were sick of their country's backward image and tired of a decade of humiliating economic ruin, rampant corruption and lectures from the West about politics and economics. Nostalgia for Moscow's lost superpower status began to outweigh memories of food shortages and Soviet repression.

Russians were also upset by NATO's expansion into the new Eastern European democracies in their backyard. In 1999, they saw Serbia as a traditional Slavic ally, a former member of the Soviet Bloc now under threat from the Soviet Union's one-time Western adversaries.

Then-Prime Minister of Russia Yevgeny Primakov was on a plane to Washington when he heard that the bombing had begun. He turned his plane around over the Atlantic and headed home, providing the central and enduring image of Russia's growing antagonism toward the United States.

When NATO troops began entering Kosovo later that spring, Russian peacekeepers in nearby Bosnia abandoned their posts and rushed to occupy Kosovo's main airport, blocking British soldiers from setting up there. Russians back home hailed the move as an important victory over NATO.

At the time, George W. Bush was campaigning for the presidency, lambasting President Clinton's chummy relationship with Russian President Boris Yeltsin. Bush promised to end personal favoritism and protect American national security. Taking office the following year, he began by expelling 50 Russian diplomats from Washington for alleged spying. Defense Secretary Donald Rumsfeld snubbed the Russian defense minister soon after by refusing to meet him on the sidelines of a NATO conference.

But Bush's Russia policy took an about-face during his first meeting with his Russian counterpart, Putin, in the Slovenian capital Ljubljana in June 2001. President Bush emerged smiling.

After the Sept. 11 attacks, Putin was the first head of state to call Bush with his condolences and an offer of support. He agreed to new U.S. bases in former Soviet Central Asia, and he didn't complain when the White House pulled out of the cornerstone 1972 Anti-ballistic Missile Treaty, as part of its plan to set up a new missile defense system.

But despite two presidents' seemingly personal relationship, bilateral relations soon resumed a downward spiral. Putin helped lead international protests against the U.S.-led war in Iraq. And the Kremlin saw a new security threat when old, corrupt administrations in the former Soviet republics of Ukraine and Georgia fell during their so-called "color revolutions." The new governments were led by young, pro-Western leaders; Moscow believed Western countries had helped bring them to power to further erode Russia's sphere of influence.

A Battle of Accusations

In January 2006, Moscow cut off natural gas supplies to Ukraine during a price dispute. The disruption affected supplies to Europe during a bitter cold spell, prompting fears of a continentwide energy crisis. In September 2006, Moscow cut off transportation and trade ties with the former Soviet republic of Georgia and deported hundreds of Georgians after officials in Tbilisi briefly arrested four Russian military officers on espionage charges.

U.S. Vice President Dick Cheney later responded by accusing Russia of using energy as a political tool to blackmail its neighbors. Russia shot back. Earlier this year, Putin accused the United States of increasing tension and violence around the world.

Washington's plan for a missile defense system, which Moscow says is a threat to its national security, has become the focus of Russia's recent anger with the West. The Kremlin is especially upset over plans to install components of the missile shield in Poland and the Czech Republic, both former Soviet Bloc countries that are now members of NATO and the European Union. The United States says the missile shield would protect against rogue states such as Iran and North Korea. But Putin says the shield would start a new arms race and has threatened to direct Russian missiles at sites in Europe, should the United States proceed with the system.

By issuing increasingly strong criticism of the West, the authoritarian Putin is seen as strengthening his own position among Russian politicians. Analysts say his rhetoric plays well to a domestic audience ahead of presidential elections next year, when Putin's two-term limit ends. Many believe he'll use an expected landslide by the pro-Putin United Russia Party in December's parliamentary elections to justify holding on to power, possibly by becoming prime minister. Putin has already indicated he may take the post; his supporters say the president's popularity gives him the "moral duty" to become the country's national leader.

As the elections neared, authorities delayed granting visas to international vote monitors from the Office for Democratic Institutions and Human Rights, the main European election watchdog and part of the Organization for Security and Cooperation in Europe, the OSCE. When the group decided against coming to Russia, saying Russian authorities were preventing it from properly monitoring the elections, Putin accused Washington of influencing the group's decision to discredit the elections. He said Russia would push to reform the OSCE, partly by limiting its human rights monitoring.

U.S. Undersecretary of State Nicholas Burns responded by calling Putin's accusations "preposterous," saying Washington would "not give a millimeter" to any proposal that would weaken the monitoring organization.

As Russia prepares for the end of Putin's presidential term next year, the country's standoff with the West looks set only to deepen.