Accessibility links
A Correspondent Finds Afghans' Optimism Waning More than five years after the fall of the Taliban, little optimism remains about the future of Afghanistan, and more and more people are looking to get out of the country. 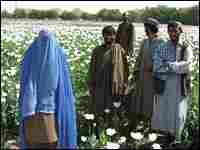 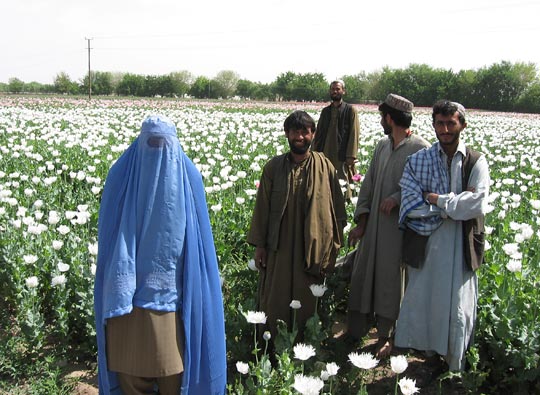 NPR's Soraya Sarhaddi Nelson, clad in a burka, stands with farmers in an opium poppy field outside Lashkargah, in Afghanistan's Helmand province.

More than five years after the fall of the Taliban, little optimism remains about the future of Afghanistan, and more and more people are looking to get out of the country, says Soraya Sarhaddi Nelson, who covers the country for NPR.

"There is still a little hope," Nelson, who is wrapping up a U.S. visit, tells Steve Inskeep.

"You ask an average Afghan, [and] they will tell you everything is dire, the economy stinks, there are no jobs, the government is collapsing, the corruption is rampant, the Taliban menace is growing.

"And you will ask them, 'Well, do you think the Taliban are going to take back over?' Most of them will say, 'No.' They haven't gotten quite that far yet. But I think that's only a matter of time."

Civilian casualties, largely in NATO airstrikes against Taliban fighters, are contributing to the pessimism.

"The anger toward NATO is very much there," she says. "People really feel that they are not there to help them anymore and that they in fact are killing people."

Life in Afghanistan these days is a tale of two cities — the somewhat Westernized Kabul, and a violent Taliban stronghold called Lashkargah, in southern Afghanistan.

"In Kabul, you'll see women or girls walking down the street with just a veil on and jeans," Nelson says. "It's very relaxed and it has a little bit of a Western feel to it. You definitely see that Afghanistan has come a long way from the Taliban days."

Nelson says Kabul feels safe enough to walk around in — especially in daylight.

But the situation is much different in Lashkargah, the capital of Helmand province.

"You don't see any women on the streets without burkas. [There is] a lot of paranoia. The bazaar is very rarely filled. People are so scared, they don't trust their neighbors. They don't trust anybody.

"They're basically racing to work — if they even still go to work — and race home at night. A lot of life is spent in the family compound. Nobody ever goes out.

"There's fear because it's very difficult to tell who's Taliban and who's not .... A lot of times they'll use motorcycles that have sirens very similar to what the police will use. As a result, you just don't know who's in town, you don't know who's an informant because the Taliban do pay money to be able to find people to kidnap. A lot of times, bodies will be left outside the city .... As a result, you just don't have really any life."