Accessibility links
Fat-Dissolving Injections: Too Good to Be True? Called lipo-dissolve, the procedure claims to dissolve fat through a series of soybean-based injections. But critics point out the procedure isn't approved by the FDA, nor has it been rigorously tested.

Listen
Fat-Dissolving Injections: Too Good to Be True? 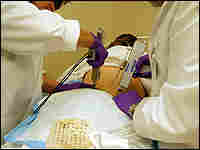 From MedSculpt in the Washington, D.C., region to a chain called Fig based on the West Coast, a lot of centers are marketing a permanent, nonsurgical fat-removal technique called lipo-dissolve.

Gabrielle Stoye, 48, first heard about the procedure last year when MedSculpt opened in Rockville, Md. Her goal was to shed inches around her waistline. She considered liposuction, but was turned off by the idea of surgery, so she decided to try the lipo-dissolve injections after a consultation with a MedSculpt physician.

During the procedure, nurses injected a solution of a soybean derivative called phosphatidylcholine, combined with an emulsifier called sodium deoxycholate into her fatty tissue. The compound, known as PCDC for short, is made by a compounding pharmacist in New York called MasterPharm.

Stoye says she felt discomfort and tenderness for a few days after the procedure.

"But when the swelling went down," Stoye says, "I was able to tell almost immediately that I was going to have size reduction."

Stoye says she lost five inches over the course of several months and several rounds of injections. She also acknowledges that at about the same time she switched to a diet of raw fruit and vegetables that may also account for the loss.

"My stomach is gone. It's flat," Stoye says.

Cosmetic surgeon Roger Friedman, who performs the procedure, says that not everyone who gets the procedure is satisfied. About 12 percent of 17,000 patients who tried it were disappointed, according to a survey studied published in the Aesthetic Surgery Journal.

Friedman administered a round of injections into patient Sonia Hanson's love handles earlier this week.

"The popping you're hearing is the pneumatic gun," he explained to her. "Sonia is getting 60 to 70 injections per side."

During the 20-minute procedure, Hanson lay on her stomach wearing a medical gown. She described the sensation as similar to a bee sting. Friedman told her to expect a few minor complications. "What she's going to see first is swelling," Friedman says. "She may also get some itching, which is not uncommon." The Aesthetic Surgery Journal study found some patients experienced pain and allergic reactions.

The PCDC mixture is marketed as a natural compound. But the Food and Drug Administration says it's a drug, and officials at the FDA say the lipo-dissolve compound has never been approved for use as a fat-removal injection. What's more, critics say, there have never been any rigorous studies to show that it's safe or effective. The best evidence that it may work comes from a study written by a researcher with financial ties to companies marketing lipo-dissolve procedures.

"The stuff may work," says Dr. Joel Schlessinger. "But the concern is, what does it do while it is reducing that fat?"

Schlessinger is president of the American Society of Cosmetic Dermatology and Aesthetic Surgery. He says that with lipo-dissolve injections, it's unclear exactly how the body breaks down fat and clears the compound.

The backers of lipo-dissolve say the compound exits through the urine. But Schlessinger says it's not that simple. First it would be absorbed in the blood. "Through the blood it would either be cleared through the liver or kidneys."

Schlessinger has written to the FDA asking the agency to investigate. And officials are looking into it. In a written response to NPR's questions on the matter, the FDA emphasized that any drug must be approved by the FDA in order to be marketed in the United States.

"I think what the FDA is saying here, in so many words, is that this is unlawful marketing and it should stop," says Cindy Pearson, executive director of the National Women's Health Network, a nonprofit, consumer advocacy group. Pearson argues the FDA should use its authority to halt the fat-dissolving business until the marketers of lipo-dissolve take steps to gain FDA approval.

"And until that happens, doctors should no longer use this," she says.

Surgeon Roger Friedman says MedSculpt is upfront in telling patients that the process is not FDA approved. But he doesn't agree that they should stop offering the procedure. His interpretation of the law is that they're not marketing a drug. He says MedSculpt is selling a procedure that uses a formula produced by a state-licensed compounding pharmacy.

Roger Friedman agrees that more research of the fat-removal injection procedure is needed.

"Currently we're working to study this," Friedman says. "And we're going to do this as a multi-site study."

They will start with the basics. During the study, they would plan to inject the real compound into volunteers' left thighs, for example, and inject a placebo into their right thighs, then compare results.

That study will help determine whether the procedure is effective. To check safety, researchers could look to see whether liver enzymes are elevated after the injections.

Even before those studies are done — and even before the FDA weighs in — it's clear many people seem willing to pay a few thousand dollars to try lipo-dissolve. Even if its claims are unproven.