Accessibility links
Mozart's 'La finta semplice' Mozart's La finta semplice tells a sophisticated story of adult love, romantic deception and backstabbing — and he composed it when he was just 12 years old! It comes to us from the Salzburg Festival.

From the Salzburg Festival 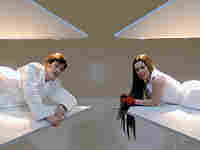 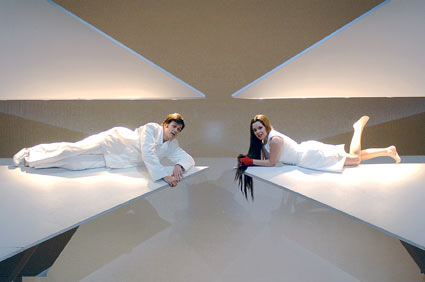 Rosina, the 'Pretend Simpleton' of the opera's title, seems ready for just about anything — except true love. In her aria Amoretti, she begs Cupid to mind his own business.

It's easy to envy naturally gifted people, but the life of a prodigy isn't always an easy one.

By the time Wolfgang Amadeus Mozart was 12 years old, in 1768, he was famous throughout Europe — and famously busy. His father Leopold, himself an accomplished musician, realized early on what he had on his hands, and took Wolfgang on the road when was only 6. Before he reached his 8th birthday, Wolfgang had performed before aristocrats and royalty in Brussels, Paris and London, amazing all who heard him with an artistic maturity that bordered on surreal.

When the young Mozart was 12, he and Leopold made an extended visit to Vienna. On the map, Vienna isn't far from Salzburg, the Mozarts' hometown. Artistically, the two were worlds apart. Many considered Vienna to be the musical capital of the world. By comparison, Salzburg was an artistic backwater.

Not surprisingly, Vienna's movers and shakers welcomed Mozart more readily than its resident musicians did. For members of the royal court, the young genius was simply entertainment. For Vienna's composers, who depended on the rich and powerful for their living, Mozart was unwelcome competition.

At the time — and even now — Vienna's state opera house was one of the highest pinnacles of musical success. So, Leopold set about securing an opera commission for Wolfgang from the Emperor. The result was La finta semplice. Up front, the opera's story is a bit silly. Look deeper, and it reveals itself as an uncannily adept examination of the intrigues and machinations of adult love.

The new drama also set a few real life intrigues in motion. As it turned out, composing the opera was far easier than getting it performed. Rival musicians weren't eager to be upstaged by a preteen composer. There were rumors that the opera was a sham — that Leopold, not Wolfgang, had actually written the piece. The premiere was delayed repeatedly. Finally, Leopold gave up and took his son, and the opera, back to Salzburg, where the score was first performed the following year.

Looking back, Vienna's composers may have been right to worry. Hearing it now, we know that La finta semplice is far below the level of Mozart's later operas — then again, there are few that aren't! Still, it stacks up pretty well to much of the work it was meant to compete with. And the opera is more than a simple curiosity — it would be well worth a listen even if it weren't by music's most precocious 12-year-old.

On World of Opera, host Lisa Simeone brings us La finta semplice from the same town where it made its debut, in a production from the Salzburg Festival.

The Story of 'La finta semplice' 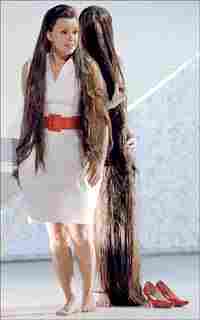 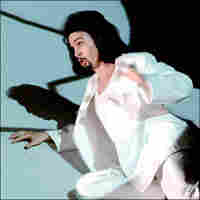 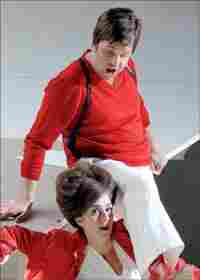 BACKGROUND: La finta semplice takes place at an estate near Cremona in the 1700s and the story has roots in the Italian theatrical tradition called commedia dell'arte. It's all about overcoming obstacles on the way to true love, and the only way to defeat those obstacles is through deceit. Several of the main characters in the opera are in love. But for various reasons, they're not allowed to marry. How they get around their predicament is the basis for the comedy.

The title La finta semplice is usually translated as "The Pretend Simpleton," but that doesn't quite capture it. In English, "simpleton" has negative connotations that don't apply to "semplice" in Italian. The point of the story is that Rosina pretends to be naïve — to be plain and innocent — but she's really a shrewd operator who knows exactly what's going on the whole time.

ACT 1: Fracasso, a captain in the Hungarian army, and his sergeant Simone, have been assigned to the house of two wealthy brothers, Cassandro and Polidoro, and their sister Giacinta. Fracasso is in love with Giacinta, and Simone has fallen for her maid, Ninetta. But neither couple can be married without the consent of the two brothers — which turns out to be a problem. Cassandro was dumped by his one, true love, and now says he hates all women, while Polidoro is just plain terrified of them.

Ninetta hatches a plan. Rosina, Fracasso's attractive sister, is scheduled to arrive for a visit. Ninetta proposes that both brothers should be duped into falling in love with Rosina.

Whe we finally meet Cassandro, he lives up to his reputation by railing against women. Fracasso says maybe that's an act — that Cassandro is actually afraid of falling for Rosina. When Cassandro scoffs at that, Fracasso tells him that in the end, women are irresistible.

Polidoro then pays his respects to Rosina and before long, he's proposing marriage! Rosina says she'd rather be wooed for a while with gifts and love letters, but Polidoro has never learned to read or write. So Ninetta offers to write a letter for him.

Polidoro tells Cassandro that Rosina has fallen for him. Cassandro finds this hard to believe, and when Rosina enters, he's immediately on guard. To put Cassandro at ease, Rosina pretends to be a young innocent. That does the trick. Cassandro is smitten. But when she asks for his ring as a keepsake, he refuses.

In the next scene, Rosina tells Cassandro that the love letter written for Polidoro was really written for him. When Cassandro reads it he's pleased, and agrees to let Rosina try on his ring. Just then Simone bursts in with the news that Rosina has a visitor. Cassandro doesn't want that ring out of his sight, and he doesn't trust anyone else in the house. So he invites everyone to lunch to keep an eye on them.

ACT 2: The servants Ninetta and Simone are waiting for everyone else to finish lunch, so they can eat, when Giacinta rushes in and appeals to Simone for help. Cassandro and Fracasso, Simone's boss, have had too much to drink and are about to duke it out.

Meanwhile, Rosina is worried that she might be falling in love. But when Cassandro stumbles in drunk, she's disgusted and quickly slips the ring he'd temporarily given her back on his finger. Fracasso, equally drunk, wakes Cassandro up and challenges him to a duel. Cassandro escapes the fight, then takes out his frustrations on the hapless Polidoro.

By now, a new intrigue is taking shape. Simone has hidden Giacinta, and Fracasso tells the brothers that she's run off with all their money. The plot is so successful that Ninetta also decides to "disappear," and Simone announces that she too has stolen everything she could find and fled. The brothers cry "Uncle". They offer Giacinta's and Ninetta's hands in marriage to whoever can find them and bring them home. Rosina tells them there's nothing to worry about, saying everything will turn out just fine.

ACT 3: After pretending to disappear, Ninetta and Giacinta are quickly "found" — by their respective lovers Simone and Fracasso. Now their weddings can finally take place.

Back at the manor house, Rosina informs Cassandro that she knows the man she's going to marry. When Polidoro comes on the scene, she tells Cassandro to hide. She tries to let Polidoro down easy, telling him that he's in love with love, not with her. She offers her hand to Cassandro, and the two of them heartlessly tease Polidoro.

Then Giacinta, Fracasso, Ninetta, and Simone return to the house demanding their reward — marriage. Cassandro tries to renege on his promise, but Rosina keeps him in his place. Giacinta and Ninetta ask for forgiveness, and Rosina exposes her own "innocent deception," saying Cassandro can surely forgive her for being a bit more clever than she appeared. Polidoro is thrilled that his brother has been duped; it proves that he's not the only fool in the family! And everything ends happily — just as Rosina predicted.