Accessibility links
Parsing the High Court's Ruling on Race and Schools The Supreme Court on Thursday struck down two public school plans aimed at achieving racial diversity. The 5-4 ruling could imperil similar plans in schools across the country. Here, a look at the ruling and its impact.

Parsing the High Court's Ruling on Race and Schools

Parsing the High Court's Ruling on Race and Schools 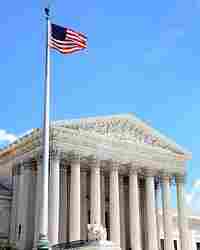 The high court issued a ruling Thursday that limits the use of race to assign public school enrollment. Karen Bleier/AFP/Getty Images hide caption

Plan Will Be Modified, School Board Member Says June 28, 2007

The Supreme Court on Thursday struck down two public school plans that used race as a factor in deciding where students attend classes. The 5-4 ruling on plans from two major public school districts — in Seattle and Louisville, Ky. — is likely to prompt revisions of similar plans in schools across the country.

Here, a look at the ruling and its impact.

Why did the Supreme Court strike down the racial diversity plans?

The court's conservative majority found that plans in Seattle and Louisville that considered race when assigning students to schools went too far to achieve racial diversity. In announcing the 5-4 decision, which split the court along ideological lines, Chief Justice John Roberts said the districts "failed to show that they considered methods other than explicit racial classifications to achieve their stated goals."

Justice Stephen Breyer wrote a dissent that was joined by the court's three other liberal justices.

In a concurring opinion, Justice Anthony Kennedy agreed that the Seattle and Louisville plans went too far. But Kennedy would not go as far as the other court conservatives, who suggested that race may almost never be considered as a factor. Instead, Kennedy said race may be a component of school plans designed to achieve diversity. To the extent that Roberts' opinion could be interpreted as foreclosing the use of race in any circumstance, Kennedy wrote, "I disagree with that reasoning."

What does this decision mean for other public school plans that consider race as a factor?

The decision narrows the arsenal of tools available to public school districts seeking to achieve or maintain racial diversity. However, because of Kennedy's concurring opinion, the decision does leave the door open for race to be used as a factor in limited circumstances.

Recent high court rulings have addressed diversity plans in higher education. Thursday's decision applies specifically to K-12 public education. However, even the majority justices disagreed on whether and how race may be considered as a factor in public school admissions. So, it isn't clear how this ruling will affect programs and circumstances in which a student's race is considered — such as admissions to competitive magnet programs. That uncertainty leaves school districts some room to maneuver.

What is clear is that school districts cannot classify students by race for the purpose of school assignments, as the Seattle and Louisville school plans did. Using race for other educational purposes, such as to track enrollment, is still permissible, based on Kennedy's concurring opinion.

What kind of school diversity plans did Seattle and Louisville have in place?

Both the Seattle and Louisville school districts used school assignment plans to maintain racial diversity, though the plans varied slightly.

The 98,000-student Jefferson County district, which includes the city of Louisville, formerly was under a court-supervised desegregation plan, but in 2001, it was declared to be "unitary," or free of the vestiges of past racial segregation.

After that, Jefferson County voluntarily adopted a "managed choice" plan that allowed race to be considered as a factor for some student assignments to schools. The plan sought to maintain black enrollment at no less than 15 percent and no more than 50 percent at each school.

The 46,000-student Seattle school district was never ordered to desegregate. But in 2000, it adopted a plan that weighed race as one of several "tiebreakers" in deciding admissions to the district's 10 high schools when there are more applicants than spaces.

Why were these school plans challenged?

Both school districts' plans were challenged by parents as a violation of the Equal Protection Clause of the 14th Amendment to the U.S. Constitution. A majority of the Supreme Court agreed that the plans were unconstitutional.

In Jefferson County, the district's race-conscious plan was challenged by a white parent whose son was denied a transfer to his neighborhood school in 2000 because of his race.

Both plans previously were upheld by federal appeals courts as being narrowly tailored to achieve racial diversity.

How does this ruling compare with other recent Supreme Court cases on diversity and education?

The opinion is the first to touch on the issue of diversity and education since 2003, when a 5-4 ruling upheld the limited consideration of race in college admissions to attain a diverse student body. Since then, Justice Sandra Day O'Connor, who approved of the limited use of race, has retired. Her replacement, Justice Samuel Alito, was in the majority that struck down the school districts' plans in Louisville and Seattle.

The 2003 cases looked at the undergraduate and law-school admissions policies at the University of Michigan. In those cases, the court upheld affirmative action in college admissions in principle, and it supported the idea that using race as one factor to promote classroom diversity is a permissible goal.

Does the ruling affect the use of affirmative action in colleges and universities?

No. The majority opinion explicitly does not reverse the court's 2003 decision upholding the right of colleges and universities to use race as one of several factors in achieving a diverse student body. In introducing the decision on public schools, Roberts noted that there are "considerations unique to institutions of higher education." Those considerations, Roberts said, make it appropriate to take race into account as part of a "holistic review" of a university applicant's qualifications.

How does this decision affect the legacy of Brown v. Board of Education, the landmark 1954 decision that outlawed segregation in public schools?

Whether the ruling upholds the spirit of Brown depends on whom you ask.

In a separate opinion siding with the majority, Justice Clarence Thomas, the court's only black member, said that school assignment plans based on race are just as unconstitutional as race-based segregation was in 1954. "What was wrong in 1954 cannot be right today," Thomas said.

But the court's dissenters said the decision reneges on the promise of Brown. In a separate dissent, Justice John Paul Stevens called the majority's reliance on Brown to rule against integration "a cruel irony."

Written by Maria Godoy, with additional reporting and analysis by Mark Walsh, Washington editor/Supreme Court correspondent for Education Week. The Associated Press contributed to this report.