Accessibility links
Bald Eagle Comes Off Endangered List The U.S. Fish and Wildlife Service has announced that it is removing the American bald eagle from the nation's list of threatened and endangered species.

The U.S. Fish and Wildlife Service has announced that it is removing the American bald eagle from the nation's list of threatened and endangered species. Al Cecere, founder and president of the American Eagle Foundation, talks with Anthony Brooks. 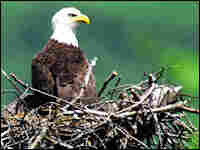 The Interior Department said Thursday that it is removing the American bald eagle from protection under the Endangered Species Act.

The announcement by Secretary of the Interior Dirk Kempthorne caps a four-decade struggle to help the national symbol recover.

Once almost wiped out by hunters and DDT poisoning, the eagle not only has survived but is thriving.

Government biologists have counted nearly 10,000 mating pairs of bald eagles, with at least one pair in each of the lower 48 states.

"The rescue of the bald eagle ... ranks among the greatest victories of American conservation," said John Flicker, president of the National Audubon Society.

The eagle population hit rock bottom in 1963, when only 417 mating pairs could be documented in the 48 states and the survival of the species was in question. It was one of the first species to be declared endangered.

DDT, a synthetic pesticide, was to blame for much of the species depletion. The pesticide was widely used in the 1940s to control mosquitoes; it seeped into lakes and streams and into fish, the eagle's favorite food, harming adult birds and their eggs.

Eagles also were targeted by hunters for their feathers. They were shot from airplanes, poisoned in some states and fed to hogs in others, until Congress passed a law in 1940 that made killing a bald eagle illegal.

The eagle has been the nation's symbol since 1782, when Congress chose its image for the country's official seal — over the loud protests of Benjamin Franklin, who preferred the wild turkey and called the bald eagle a "bird of bad moral character."

The interior department had been considering what to do about the bald eagle since 1999, when government biologists concluded its recovery was a success.

Earlier this year, a federal court directed the Interior Department to make a decision on the bird's status by June 29. The push for a decision came amid a lawsuit by a Minnesota developer who said the government's delays were keeping him from developing seven acres of land where an eagle had nested.

Damien Schiff, attorney for the Pacific Legal Foundation that represents the developer, said the delisting is a victory for property owners. But he worries that a proposed eagle protection plan using another law — the Bald and Golden Eagle Protection Act of 1940 — will be too restrictive.

The Bald and Golden Eagle Protection Act would make it illegal to kill or disturb the bird.

The Fish and Wildlife Department determined what activities are disturbing to eagles — and one of those is building a house where bald eagles are nesting.

Some groups say the Bald and Golden Eagle Protection Act will restrict development, and they may go to court. Parcels of land that are desired both by developers and by bald eagles likely will lead to isolated disputes.

The bird is admired by some people, and viewed as a nuisance or a dangerous predator by others.

But conservationists say the eagle's recovery shows that the 1973 Endangered Species Act works. The Act has been under attack from property rights and business groups, and it is the subject of an internal review in the Interior Department.

Environmentalists worry that changes will weaken the law, making it harder to keep plants and animals from disappearing, especially those lacking the symbolism of the bald eagle.

"No other species has that advantage," said Michael Bean, an endangered species expert at Environmental Defense. "It's the national symbol."

Written by Kayla Webley from NPR reports and The Associated Press.