Accessibility links
Cats First Tamed in the Middle East Whenever humans met dogs or horses in the wild, they usually tamed them and put them to work. But not cats; it appears most pet cats can trace their heritage back to the wildcats of the Middle East. 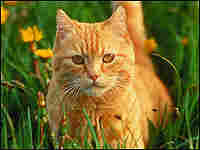 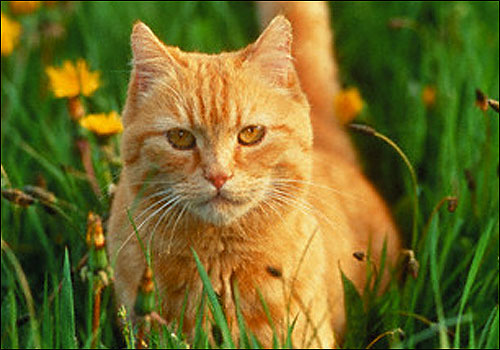 Scientists say that F. silvestris lybica wildcats from the Middle East look much like this tabby house cat. 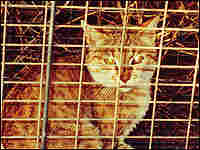 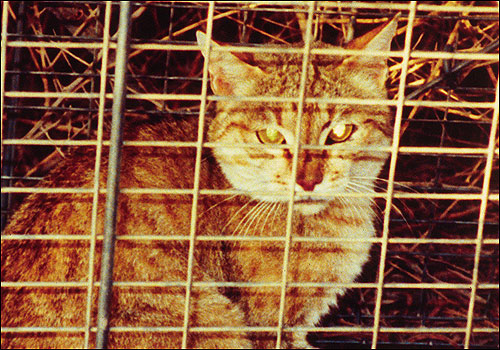 This wildcat, Felis silvestris lybica, was trapped by Driscoll in Israel. 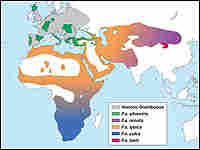 A current and historic distribution of F. silvestris. The F.s. lybica, found in the Middle East, is the subspecies that researchers believe to be the most like the average house cat. Science hide caption 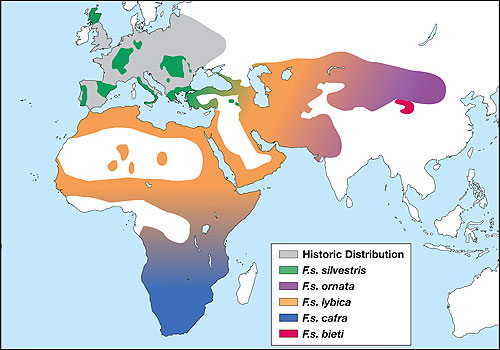 A current and historic distribution of F. silvestris. The F.s. lybica, found in the Middle East, is the subspecies that researchers believe to be the most like the average house cat.

Whenever your pet cat brings you a dead mouse or rips apart your couch, it's a reminder that your little fuzz ball is not too far removed from a wild animal.

There are different theories about where and when cats were first domesticated. Now, scientists may have some answers after looking at the genes of nearly 1,000 pet cats and their closest wild relative.

The progenitor of pet cats is the wildcat, known officially as Felis silvestris. Wildcats are small, striped or spotted cats that live in many parts of the world, including Africa, Europe, the Middle East and Asia.

Some governments want to protect this species. But Driscoll says that is hard to do when wildcats look so much like domestic cats. They sometimes even mate with pets, creating hybrids.

Driscoll says the issue came into court eight or nine years ago when someone was taken to court for killing a Scottish wildcat.

"He was on the stand there and he said, 'It doesn't look like a Scottish wildcat to me,'" Driscoll says. "And of course, there was nobody that could say for certain that that was a Scottish wildcat, and their case fell apart."

All this made scientists wonder if they could sort everything out by looking at feline genes.

To do that, you have to get DNA from many cats. The house cats were easy. Driscoll got samples from more than 30 breeds recognized by the Cat Fanciers' Association. He also collected DNA from pet cats in Japan and Europe.

But to lure the wildcats in, he needed dead birds for bait — and a passport.

Every morning, he would get up to check his traps. If he found an angry cat, he would sedate it and take a small blood sample and a bit of skin from its ear.

"Oh, they hate you," says Driscoll. "They are really not impressed at being in a cage."

Driscoll took all these samples to a National Cancer Institute lab in Maryland, where he works. The lab is run by Stephen O'Brien, a pioneer in cat genetics.

When they looked at the genes of wildcats, they found a distinct sub-species in each region that this cat calls home: Europe, Central Asia, sub-Saharan Africa, China and the Middle East.

Then, they looked at the genes of pet cats.

The pet cats "all coalesce into a group that is virtually identical to one of the subspecies." O'Brien says that subspecies is the one found in the Middle East.

This is where agriculture was first seen more than 9,000 years ago in the Fertile Crescent. The researchers suspect that as people started to store grain, the grain attracted mice.

"Then we think that the wild cats in the neighborhood came out from the wild and sat down," O'Brien says.

"But of course, the vicious ones were simply dispatched by the farmers themselves," O'Brien adds. "The friendly ones, the tame ones, well, that's a different story." O'Brien says the tame cats helped catch rodents, "and maybe they were providing a little entertainment for the children, too."

The study is being published by the journal, Science. Other experts are intrigued.

"The simplicity of cats in terms of domestication is really surprising," says Robert Wayne, an evolutionary biologist at the University of California in Los Angeles.

He says the genes of other domestic animals show a more complex history.

"With horses, for instance, it seems like horses were plucked out of the wild in many different places," Wayne says. "Dogs also seem to have a pretty broad area over which they were domesticated."

Of course, once cats became pets in the Middle East, people then spread them around. In Egypt, people even worshipped them.

Many cat species are now endangered, but worldwide, Driscoll estimates that there are probably over 600 million house cats.