Accessibility links
'Working IX to V' in Ancient Rome and Greece You think you hate your job? In ancient Rome or Greece, you might have been an armpit plucker, or a hairdresser who used urine and pigeon droppings to make your clients look good.

Listen
'Working IX to V' in Ancient Rome and Greece 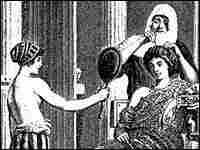 The job of an ornatrix — a hairdresser slave in ancient Rome — included using decomposed leeches in hair treatments. From 'Working IX to V'. Published by Walker & Company. hide caption 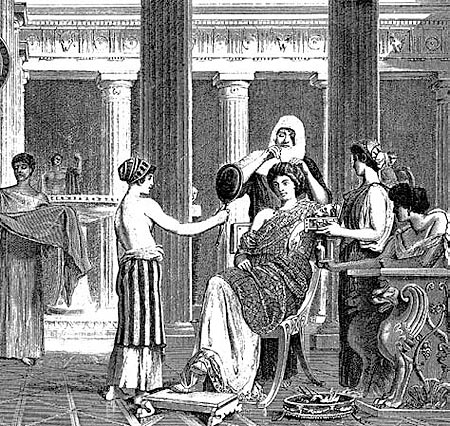 The job of an ornatrix — a hairdresser slave in ancient Rome — included using decomposed leeches in hair treatments.

From 'Working IX to V'. Published by Walker & Company. 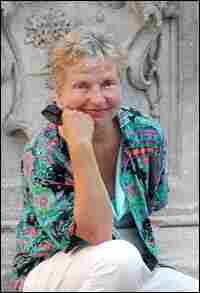 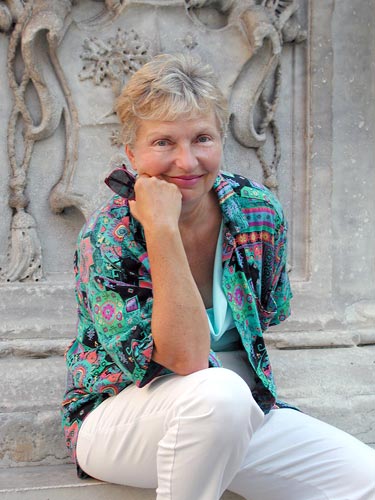 If you woke up this morning dreading the workday, you might be thankful that at least you're not an ornatrix — a hairdresser slave in ancient Rome. In those days, hair treatments required ingredients like decomposed leeches, urine and pigeon droppings.

Ornatrix is just one of the professions described in Working IX to V, a new book about ancient Greece and Rome.

Author Vicki Leon tells Renee Montagne about some of the unusual professions of those ancient times, many of which were carried out by slaves.

"Slavery back then wasn't based on race, color or religious preference," Leon says. Instead, people often became slaves through war and conquest. And they were of varying backgrounds.

"It did run the gamut. And a great many of the slaves — because they were well educated, and in some cases, more educated than their masters — they tended to be given positions of great trust," Leon says.

Romans themselves were slaves to fashion. They wanted their bodies to be perfect, which led to some bizarre specialties, Leon says. "Like the polisher guru [who] took pumice and other abrasive materials and polished their clients to a rosy glow."

Or armpit pluckers, who had to have nerves of steel to deal with their shrieking clients, Leon says.

And long before the BlackBerry, there was the nomenclator. These personal assistants helped their masters remember the names and personal details of people who would come to greet them. With a whisper into his ear, a "senator or that fat cat could greet him like a long-lost friend," Leon says.

"Some particularly pretentious wealthy people had a nomenclator to keep track of all their staff." 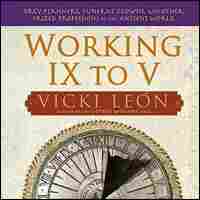 Running with scissors & other plum jobs

In the unfree workplace, there were certain positions that most slaves would fight to get.

The dream job for a female house slave was that of sandaligerula, a post that took more time to spell than to do. High-born Romans and Greeks engaged in shoe rituals with rigid standards as to where they could be worn. A man who wore a toga with sandals, for instance, would be laughed out of the Senate.

To guarantee that her mistress was properly shod at all times, the sandaligerula accompanied her mistress to dinner parties. Once there, the sandal-slave took off her owner's street shoes and replaced them with party slippers. Removing one's own footgear was so declassé that even the humblest guest brought along a sandal-slave. After the partygoers went in to dinner, the shoe-schleppers enjoyed a little downtime until the event broke up. At deluxe events, guests got their feet bathed as they reposed on dining couches; this job, however, was carried out by the host's special toe-cleaning, oil-'em-down slaves.

Another fab position that younger slaves lobbied for was flabellifer. Open to males or females, it involved carrying a fan for the mistress, flapping it on command. During the dog days of August, slaves might be in for some marathon fanning; most of the time, however, flabellifers were there for show, and knew it.

Seasoned slaves with good memories and diction became salutigeruli. They spent their days carrying complimentary messages from their owners to friends, acquaintances, and those on the "need to be flattered" list.

Musically inclined slaves nabbed the coveted fistulator positions, available only to those whose owners were public speakers. Fistulators carried a reed pitchpipe. To start, the fistulator gave a subtle tootle or two so that the great man could proceed to orate at just the correct pitch. Gracchus, famed orator in republican times, was said to have been the first to flaunt a fistulator.

Upper-class foodies had a problem: how to dine with elegance while lolling on a couch? Then some bright guy invented a labor-saving device called the scissors, a word that meant both the cutting instrument and a slave of the same name. Any household of consequence assigned a scissors slave to attend each dinner guest. A fellow of steady hands and good hygiene, the human scissors used his bronze instrument to cut up his guest's meat and other messy items.

Most slaves could only fantasize about working part-time. The flashiest part-time gig? Triumph slave. Whenever a victorious Roman general killed five thousand of the enemy in a single battle, he earned a triumph, a massive musical celebration with oxen sacrifices, booty distributions, and a huge parade, complete with cringing losers in golden chains.

The slave stood behind the triumphant general in his chariot, holding a heavy, jewel-laden gold crown over the man's head. His other task was much trickier. As the procession moved along amid cheers, the slave whispered wet blanket remarks into the general's ear: "You're not that great. Look around you and remember you're only a man."

When it came to averting bad luck—or military megalomania—the Romans thought of everything. 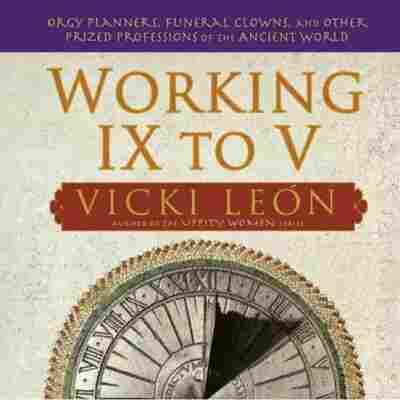