Accessibility links
Petraeus: Alliances, Time Are Crucial Tools of War The top U.S. commander in Iraq says success in Iraq may take more time than Washington is willing to give. On a recent inspection in Baghdad, Gen. David Petraeus also says any real long-term solution for the country must be a political one. 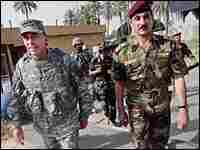 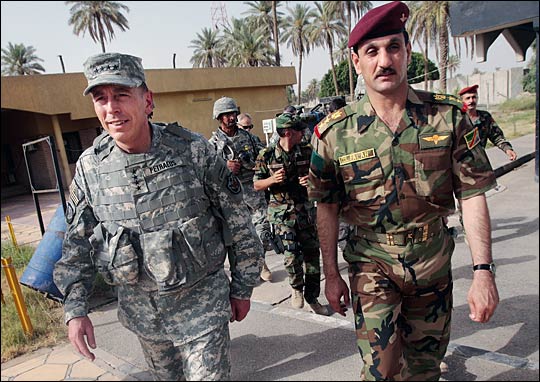 Gen. David Petraeus (left), commander of U.S. military forces in Iraq, walks with an Iraqi colonel during an inspection in the Baghdad area of Kadimiyah, June 27, 2007. 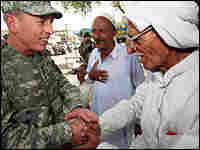 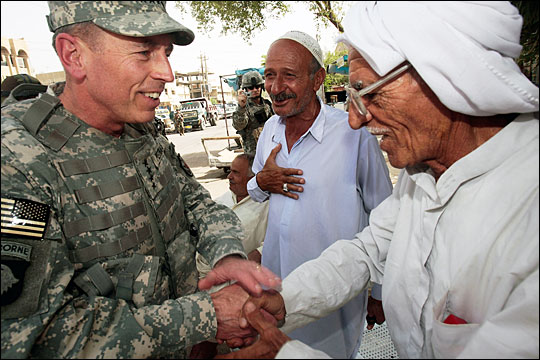 A car bomb in southwest Baghdad Thursday killed at least 25 people, while scattered mortar shells killed and wounded others around the city.

Despite the violence, U.S. officials say there are signs of progress in the military offensive launched more than a week ago to clear out insurgents in and around Iraq's capital.

But on a recent inspection of one of the city's neighborhoods, Gen. David Petraeus, the top U.S. commander in Iraq, says success in the country may take more time than Washington is willing to give.

Accompanied by at least two dozen Iraqi and U.S. soldiers, Petraeus walks around Kadimiyah in north Baghdad, where the streets have been blocked off and lined with armed vehicles.

Shiite cleric Moqtada al Sadr and his Mehdi Army are largely in control of the area, which has seen relatively little sectarian violence. The general stops at a cafe pre-selected by Iraqi army officials and chats with the owner.

These are the kind of interactions — which Petraeus advocates in the Army counterinsurgency manual that he wrote — that the general wants to use to gauge success in Iraq. He wants to know how many businesses are open, how many children are in school, whether it feels safe to walk down the street.

But instead, Petraeus has inherited a war that he says requires other measuring sticks: the number of insurgents killed, sectarian murder rates, car bombs.

Petraeus is a week and a half into the most significant U.S. offensive in Iraq to occur under his watch. And while dozens of al-Qaida members have been killed and some key insurgent strongholds have been cleared, Petraeus says that's just the first step.

"We're still at the harder-before-it-gets-easier point in that regard as we go into these sanctuaries that al-Qaida has had ... and wrest them away from al-Qaida and their affiliates and then try to create the structures that can hold them," Petraeus says.

Holding these areas means getting Iraqi security forces trained so they can keep the insurgents out.

Building up the Iraqi army and police has been a difficult work-in-progress. There are widespread issues of corruption and questions about loyalty. In Kadimiyah, some members of the Iraqi security forces have links to the Shiite militias.

"You have to applaud somebody who decides to turn his weapon on al-Qaida instead of on you," Petraeus says.

While these alliances may change over time, Petraeus says they are a crucial tool in the war — for now. The current surge in U.S. forces began in February, and the last of the 30,000 troops only arrived a few weeks ago. Petraeus has been given until September to show that the surge has been able to change the momentum in Iraq.

The 55-year-old, four-star general says this is the toughest job he has ever had. "The rucksack of responsibility is very, very heavy," he says.

A few hours after Petraeus' visit on Wednesday, a car bomb exploded in a busy square a couple of miles from where he was having tea. The explosion killed at least 10 people and wounded more than a dozen.

Petraeus says that the surge is helping root out the militant insurgents who wage these attacks. But he also says winning a counterinsurgency requires more than killing the enemy, and in the end, Petraeus says, any real long-term solution in Iraq must be a political one.