Accessibility links
Writer Finds a Fated Friend in 'Jesus' Son' If you're only going to read one book this year about getting stabbed in the eye and crushing tiny, helpless bunnies, then run right out and get Denis Johnson's Jesus' Son. 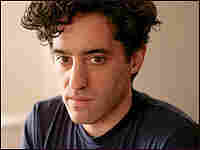 Nathan Englander is the author of the just-published novel The Ministry of Special Cases and the story collection For the Relief of Unbearable Urges. He currently spends his days drinking coffee at the Hungarian Pastry Shop in New York City. hide caption

If you're only going to read one book this year about getting stabbed in the eye and crushing tiny, helpless bunnies, then I'd run right out and get Denis Johnson's Jesus' Son.

There are so few books that I go back to again and again, and fewer still that were written in the last 20 years. But I can never get enough of Jesus' Son. It's a small volume of 11 short stories. And it is brutally honest and painfully beautiful. It's set in a down-and-out world of drugs and drink. But wait — don't turn that dial — Mr. Johnson succeeds at this where so many others fail. He doesn't ever romanticize these dark settings while leaving his narrator open to the fact that, despite it all, we may live in a heartbreakingly romantic world.

Just because Mr. Johnson doesn't romanticize, doesn't mean I can't: because I came to these stories in the most wonderful way. Someone — I can't remember who, and don't remember when — gave me a Xeroxed copy of the first story, "Car Crash While Hitchhiking." If you look at the book, you'll see the author's name is absent from the margins, and not even the whole title of the story is there. So I read what I thought was called "Car Crash," and loved it and was moved by it. And then, in the way good reading makes you feel like your connection to it was fated, I soon ended up with a copy of the book in my hands. When I started it, I knew: This is that guy. And I read on and on, and thought, This guy is that good.

I was living in Iowa City at the time, and this book, for my friends and me, became sort of a young writers' bible. This is the kind of thing that could be done. With dialogue that feels like you're getting it verbatim and stripped-down prose, he writes simple, honest stories that have the bigness of great work. The plots go like this: A man shaves his roommate in the hospital, the shave-ee having survived being shot three times by two different wives; there's one about a hospital orderly mopping a floor that's already clean, and another with a guy out on bail drinking at The Vine (a bar I could see from my apartment window, which once again, is me romanticizing).

And, even better, when you read them, the stories might sound like this: "I went out to the farmhouse where Dundun lived to get some pharmaceutical opium..."

Or like this: "We lay down on a stretch of dusty plywood in the back of the truck with the daylight knocking against our eyelids and the fragrance of alfalfa thickening on our tongues."

Getting back to "Car Crash While Hitchhiking," that painful, stunning and — to me — ultimately hopeful story about death, the narrator finds himself back in detox and at rock bottom. He's hearing voices, seeing things, and, acknowledging his pitiable state, he addresses us, his dear readers. He says quite frankly, "And you, you ridiculous people, you expect me to help you." But we do, Denis Johnson, we do. 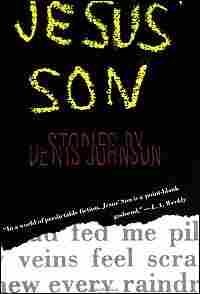 A salesman who shared his liquor and steered while sleeping...A Cherokee filled with bourbon...A VW no more than a bubble of hashish fumes, captained by a college student...

And a family from Marshalltown who head-onned and killed forever a man driving west out of Bethany, Missouri...

...I rose up sopping wet from sleeping under the pouring rain, and something less than conscious, thanks to the first three of the people I've already named—the salesman and the Indian and the student—all of whom had given me drugs. At the head of the entrance ramp I waited without hope of a ride. What was the point, even, of rolling up my sleeping bag when I was too wet to be let into anybody's car? I draped it around me like a cape. The downpour raked the asphalt and gurgled in the ruts. My thoughts zoomed fully. The traveling salesman had fed me pills that made the linings of my veins feel scraped out. My jaw ached. I knew every raindrop by its name. I sensed everything before it happened. I knew a certain Oldsmobile would stop for me even before it slowed, and by the sweet voices of the family inside it I knew we'd have an accident in the storm.

I didn't care. They said they'd take me all the way.

The man and the wife put the little girl up front with them and left the baby in back with me and my dripping bedroll. "I'm not taking you anywhere very fast" the man said. "I've got my wife and my babies here, that's why."

You are the ones, I thought. And I piled my sleeping bag against the left-hand door and slept across it, not caring whether I lived or died. The baby slept free on the seat beside me. He was about nine months old.

...But before any of this, that afternoon, the salesman and I had swept down into Kansas City in his luxury car. We'd developed a dangerous cynical camaraderie beginning in Texas, where he'd taken me on. We ate up his bottle of amphetamines, and every so often we pulled off "the Interstate and bought another pint of Canadian Club and a sack of ice. His car had cylindrical glass holders attached to either door and a white leathery interior. He said he'd take me home to stay overnight with his family, but first he wanted to stop and see a woman he knew.

Under Midwestern clouds like great grey brains we left the superhighway with a drifting sensation and entered Kansas City's rush hour with a sensation of running aground. As soon as we slowed down, all the magic of traveling together burned away. He went on and on about his girlfriend. "I like this girl, I think I love this girl — but I've got two kids and a wife, and there's certain obligations there. And on top of everything else, I love my wife. I'm gifted with love. I love my kids. I love all my relatives" As he kept on, I felt jilted and sad: "I have a boat, a little sixteen-footer. I have two cars. There's room in the back yard for a swimming pool" He found his girlfriend at work. She ran a furniture store, and I lost him there.

The clouds stayed the same until night. Then, in the dark, I didn't see the storm gathering. The driver of the Volkswagen, a college man, the one who stoked my head with all the hashish, let me out beyond the city limits just as it began to rain. Never mind the speed I'd been taking, I was too overcome to stand up. I lay out in the grass off the exit ramp and woke in the middle of a puddle that had filled up around me.

And later, as I've said, I slept in the back seat while the Oldsmobile — the family from Marshalltown — splashed along through the rain. And yet I dreamed I was looking right through my eyelids, and my pulse marked off the seconds of time. The Interstate through western Missouri was, in that era, nothing more than a two-way road, most of it. When a semi truck came toward us and passed going the other way, we were lost in a blinding spray and a warfare of such noises such as you get being towed through an automatic car wash. The wipers stood up and lay down across the windshield without much effect. I was exhausted, and after an hour I slept more deeply.

I'd known all along exactly what was going to happen. But the man and his wife woke me up later, denying it viciously.

I was thrown against the back of their seat so hard that it broke. I commenced bouncing back and forth. A liquid which I knew right away was human blood flew around the car and rained down on my head.

Reprinted with permission of HarperCollins Publishers.