Accessibility links
In Reversal, High Court to Hear Detainee Cases The U.S. Supreme Court will review whether Guantanamo Bay detainees may go to federal court to challenge their indefinite confinement. Friday's decision is a reversal of the court's previously stated opinion. 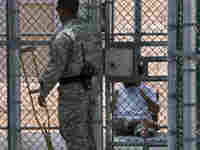 A guard checks on a detainee in a recreational area in Guantanamo Bay, Cuba. Paul J. Richards/AFP/Getty Images hide caption

What are the legal rights of detainees held at the U.S. prison camp at Guantanamo Bay, Cuba? Do they any access to federal courts? Read our guide to detainee rights.

The U.S. Supreme Court on Friday reversed course, deciding to review whether Guantanamo Bay detainees may go to federal court to challenge their indefinite confinements.

The unusual move is a setback for the Bush administration, which has argued that a new law strips courts of their jurisdiction to hear detainee cases.

In April, the court turned down an identical request, although several justices indicated they could be persuaded otherwise.

The justices did not indicate what changed their minds about considering the issue. But last week, lawyers for the detainees filed a statement from a military lawyer in which he described the inadequacy of the process the administration has put forward as an alternative to a full-blown review by civilian courts.

"This is a stunning victory for the detainees," said Eric M. Freedman, professor of constitutional law at Hofstra Law School, who has been advising the detainees. "It goes well beyond what we asked for and clearly indicates the unease up there" at the Supreme Court.

In February, the U.S. Circuit Court of Appeals for the District of Columbia upheld a key provision of a law the Bush administration pushed through Congress last year stripping federal courts of their ability to hear the detainees' challenges to their confinement.

When the Supreme Court denied the detainees' request to review the appeals court ruling, detainees petitioned the justices to reconsider.

Lawyers for the detainees said dismissing the petitions would be "a profound deprivation" of the prisoners' right to speedy court review. Many of the 375 detainees have been held at Guantanamo for five years.

But the Bush administration asked that the detainees' petitions be thrown out.

In recent months, the main arena in the legal battle over the detainees has been the U.S. Circuit Court of Appeals for the District of Columbia.

The appeals court is considering how to handle the detainees' challenges to military tribunals that found them to be enemy combatants, which left them without any of the legal rights accorded prisoners of war.

The White House is considering closing Guantanamo and transferring some of the most dangerous suspects to a prison at Fort Leavenworth, Kan., and a Navy brig in South Carolina. The Guantanamo prison has brought global criticism of the Bush administration and condemnation from Democrats on Capitol Hill.

The detainees' attorneys want the appeals court to allow a broad inquiry questioning the accuracy and completeness of the evidence the tribunals gathered about the detainees, most of it classified.

The Justice Department has been seeking a limited review, saying that the findings of the military tribunals are "entitled to the highest level of deference."

In April, the court denied the same appeals by the prisoners held by the United States in Cuba, but the justices, in a brief order, said they would hear and decide the two cases during the court's term that starts in October.

From The Associated Press reports