Accessibility links
Primer: Guantanamo Detainees' Rights In a highly unusual reversal, the Supreme Court has agreed to review whether detainees at Guantanamo Bay can challenge their confinement in federal court by filing what is known as a writ of habeas corpus. Here, a guide to some of the legal issues involved. 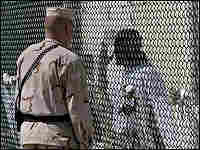 A guard talks with a Guantanamo detainee in an April 2007 file photo. The Supreme Court has agreed to review whether detainees at the U.S. prison camp in Cuba can challenge their confinement in federal court. Paul J. Richards/AFP/Getty Images hide caption

Anne Hawke is an editor and producer with NPR. She is a graduate of New York University's School of Law.

In a highly unusual reversal, the Supreme Court has agreed to review whether detainees at Guantanamo Bay, Cuba, can challenge their confinement in federal court by filing what is known as a writ of habeas corpus. The announcement represents a rare change of course for the nation's high court, which earlier decided not to take on the case.

Here, a guide to some of the legal issues involved:

What is habeas corpus?

"Habeas corpus" is a Latin phrase meaning "you have the body." It's an ancient concept. In old English law, it was used to refer to a judge's order (or "writ") to bring a prisoner before a court to determine whether his imprisonment was unlawful.

In modern times, death row inmates have used this process to get access to federal court to challenge their confinement. In 1996, however, Congress passed a law cutting back on habeas petitions in death-penalty cases, reasoning that those appeals had become so numerous that they were eroding the effectiveness of the death penalty.

What does habeas mean for a Guantanamo detainee?

For a detainee in the prison at the U.S. Naval base in Cuba, habeas corpus refers to the right to get direct access to federal court to challenge his imprisonment. Habeas is a process that challenges the lawfulness of how or why a detainee is confined at Guantanamo.

What is the current status of habeas review?

Detainees do not currently have access to federal courts through habeas corpus to challenge the lawfulness of their confinement. In 2005, Congress passed the Detainee Treatment Act, which eliminated habeas corpus for all detainees at Guantanamo.

The Guantanamo military tribunals, called military commissions, were created by executive order in November 2001, but in June 2006, the Supreme Court struck down the system. In October 2006, Congress passed the Military Commissions Act, establishing a new system of military tribunals to hear cases involving Guantanamo detainees. Those cases include allegations of war crimes, and determinations of whether a detainee is an enemy combatant. Access to federal court is available under the Detainee Treatment Act only if a detainee is appealing the determination of his status as an enemy combatant or a war crime conviction. (See accompanying chart.)

What has the Supreme Court said regarding habeas corpus and detainees?

The Supreme Court reversed itself Friday by deciding to hear a case involving 45 men at Guantanamo who filed writs of habeas corpus. The detainees are asking that a federal judge review whether it is constitutional to keep them locked up indefinitely as enemy combatants — without being charged or having access to lawyers.

But Congress has barred detainees from filing writs of habeas corpus. The detainees challenged that law in court, but a federal appeals court ruled against them in February. In April, the Supreme Court declined to review the appeals court's decision.

In changing course now, the high court ordered that new briefs be filed and said it would hear the cases later this year.

What changes are congressional Democrats calling for?

Democrats want to restore the right of habeas review to Guantanamo detainees. In early June, the Senate Judiciary Committee voted 11-8 for a proposal that would do just that. Sen. Arlen Specter of Pennsylvania was the only Republican to join the panel's Democrats in voting for the bill.

In response, the Justice Department issued a statement indicating that President Bush's senior advisers will recommend that he veto the bill.

Why does the Justice Department oppose these changes?

In a letter to Judiciary Committee Chairman Patrick Leahy (D-VT) in early June, Attorney General Alberto Gonzales said that granting detainees greater access to U.S. courts would overburden those courts. It would also delay the process of "bringing enemy combatants to justice." Quoting a 1950 Supreme Court ruling, Gonzales warned that "the extension of habeas corpus to alien combatants captured abroad 'would hamper the war effort and bring aid and comfort to the enemy.'"

Does the U.S. Constitution require that detainees be granted habeas review?

The Bush administration and many Republicans argue that the rights guaranteed under the U.S. Constitution — including the right to access the courts — extends only to individuals present on U.S. territory and to U.S. citizens who are terrorism suspects, not to alien detainees at Guantanamo.

Democrats and other critics of the Detainee Treatment Act argue that the removal of habeas corpus is unconstitutional. They claim that habeas is fundamental to civilized society, and that stripping Guantanamo detainees of that right has diminished America's moral standing abroad.

What other judicial processes are in place for Guantanamo detainees?

Only three cases have been brought under the new system of military commissions at Guantanamo Bay. Two of those cases were recently dismissed. In the third case, the detainee pleaded guilty and was repatriated to Australia.

Without habeas corpus, there are currently two routes to the federal courts. (See accompanying chart.) The Combatant Status Review Tribunal determines whether a detainee is an enemy combatant. The Court of Military Commissions decides whether a detainee committed war crimes. Both of those decisions are ultimately reviewable by the U.S. Circuit Court of Appeals for the District of Columbia and the Supreme Court of the United States.

Sources: U.S. Department of Justice; Madeline Morris, a law professor at Duke University and chief counsel to the Office of the Chief Defense Counsel for Military Commissions.