Accessibility links
Ben Sidran, 'Talking Jazz' with the Masters Ben Sidran's latest release is a whopping 24-CD box set — and not a second of it features any actual music. Hear the jazz pianist and former NPR host speak about his new compilation of interviews with luminaries of the jazz world. 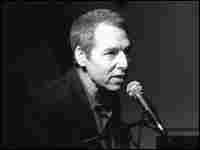 As a host of NPR jazz programs, Ben Sidran says he approached his interviews with the intent "to demystify the jazz musician." hide caption

Saxophonist Sonny Rollins on practicing on the Williamsburg Bridge

Jazz pianist Ben Sidran's latest release is a 24-CD boxed set, and not a second of it features any actual music.

Sidran, whose career in music spans multiple genres and decades, recently sat down with Scott Simon to discuss his compilation.

Talking Jazz presents a wide spectrum of personalities in and around the music, from such legends as Miles Davis and Sonny Rollins to underappreciated or forgotten virtuosi like Jay McShann and Emily Remler. The conversations were collected during a significant historical moment in the 1980s, according to Sidran.

"It makes you realize that we're all living in the middle of history all the time, although sometimes in retrospect we can see it was historic," he says.

Sidran specifically recalled his encounter with Miles Davis. Though Davis was notoriously difficult to talk to, Sidran remembers "just the opposite."

"When I hear that [interview], the first thing I hear are the waves on the beach," he says. "I was sitting on the deck of his beach house in Malibu with him. And he was sitting across from me, and he was drawing on this pad."

The interviews frequently illuminate aspects of the musicians' creative processes.

"[Davis] actually is one of the great advocates of putting creative people in a room and mixing it up and seeing what happens," Sidran says.

But for Sidran, the idea of a jazz oral history extends beyond the production of the music itself. "It keeps coming back to this for me: These people embody something," he says. "They embody not just the notes, but a way of life and an approach."