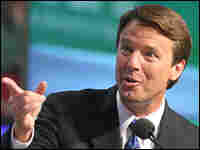 It's crunch time for the candidates seeking the White House, as they file their second quarter fundraising results on Saturday.

Among the Democratic field, Sens. Hillary Clinton and Barack Obama are expected to pull in twice to three times as much cash as former Sen. John Edwards. But as he was quick to point out in a wide-ranging interview with News & Notes' Tony Cox, money isn't everything:

"It wasn't my goal to win a fundraising contest," he said. "It was my goal to have the money we need for people to hear this message."

Still, the former trial lawyer has a few aces up his sleeve. For one, he's the only Democratic candidate in the running who hails from the South. The last Democrat elected President who was not from the South: John F. Kennedy.

"I think we have a great opportunity in the South for multiple reasons," said Edwards. "The leading contenders for the Republican nomination are not Southerners. If I'm the Democratic nominee, I think we have a terrific chance to win lots of Southern states. Equally important, I understand the culture and the economy in the rural South, which is the place you have to be competitive to win Southern states."

Edwards also has the luxury of time. He's been out of the Senate since he lost his bid for the vice presidency, alongside John Kerry in 2004. Political watchers say he's been campaigning for 2008 ever since, this time making poverty one of his main policy issues.

"The biggest cause in my life is ending poverty and helping those who don't have a voice in this country," he said. "And my presidential campaign is a great opportunity to do that."

After explaining his often-used "two Americas" stump speech theme, Edwards said he was "very concerned" about the Supreme Court's decision this week to limit the ability of public schools to use race in determining student placement.

"If you look at what's happening with the court, there are many 5-4 decisions which are moving in the direction of taking away civil rights, the rights of women and the rights of minorities," Edwards said. "So I think we have great reason to be concerned. It' s a great indicator of how crucial it is for my party to win the White House in 2008 because the next president is going to have huge control over the shape of the U.S. Supreme Court."

"I was very proud of Elizabeth," he said. "The hate mongering that some people — including her [Ann Coulter] — engage in is a horrible thing. Somebody's got to stand up to these kind of people, and I was proud to do it myself and also see Elizabeth do it ... When people attack you, you have to stand up and fight back. You're not fighting for yourself; you are fighting for a cause."