Accessibility links
A Jazz Guitar Legend: Alive, Live and 75 Guitarist Kenny Burrell has recorded with the likes of Billie Holiday, John Coltrane and Duke Ellington. Now on the other side of 75, he discusses his lengthy career, his latest CD and the development of his unique style. 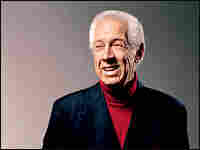 Stormy Monday/Blues for the Count [Live] 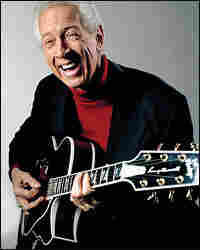 Guitarist Kenny Burrell celebrated his 75th birthday last year by doing something for the 99th time: He recorded a new album.

Burrell came to Yoshi's in Berkeley, Calif., to play a four-night run in July 2006. On the last night — his platinum anniversary — he performed two sets with flutist Hubert Laws, organist Joey DeFrancesco and the Gerald Wilson Orchestra.

The results were compiled onto a new release called 75th Birthday Bash Live! Burrell recently visited NPR's Los Angeles bureau to speak with Debbie Elliott about his latest disc and his long career in music.

Burrell learned his craft in Detroit, in a musical community which featured many future jazz legends: Milt Jackson, Thad Jones, Hank Jones, Frank Foster, Paul Chambers, Joe Henderson, Tommy Flanagan, Donald Byrd and many others. He described the Motor City of the 1940s and early '50s as a vibrant scene, full of fruitful exchanges of musical ideas, records and jam sessions. It was an environment which fostered tremendous growth in many musicians who would eventually migrate to New York.

"I can't give a label to it, but I can just kind of describe part of the process in which [we were involved], which I think helped all of us," Burrell said. "And that's why I feel so many of the musicians had such a thorough training in jazz and preparing to make it."

Once in New York, he performed and recorded with countless jazz masters. Of course, Burrell always retained his signature mellow sound and bluesy feeling — honed through many years in Detroit — though he could not help but be stylistically affected by his extensive experience.

"[My] style evolved, not changed, but I think evolved as I grew and matured," Burrell said. "I don't think there was any kind of change I did in a deliberate way — I think I just evolved."

Burrell began teaching in the 1970s, and today, he is director of the jazz studies program at UCLA. In 1978, he developed the first regular college course on Duke Ellington.

"Ellington set his own standards in terms of what was good and what was not good, and one of his philosophies was if it sounds right, it is right," Burrell said. "The main thing that Ellington was interested in was sound ... if the music sounded good, then that's what he was going with, no matter how you might analyze it."

Burrell, who has performed with Ellington, praised the jazz great's "freedom" and "courage." Appropriately, Burrell performs several Ellington compositions on his latest CD.