Accessibility links
U.S. Growers Say China's Grip on Garlic Stinks With more than a billion mouths of its own to feed, China has not been a major exporter of human food to the U.S. But one item in the grocery store that is likely to come from China is garlic. That's worrisome to the California town that has become synonymous with the pungent plant. 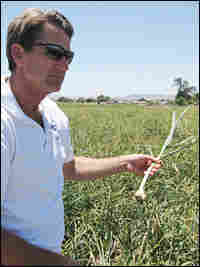 Bill Christopher's family has been growing and packing garlic in and around Gilroy, Calif., for more than 50 years. The local industry is now challenged by cheaper imported garlic from China. Scott Horsley, NPR hide caption 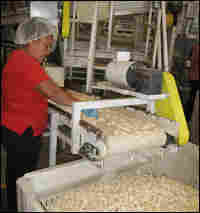 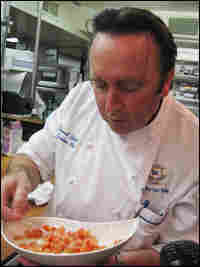 With more than a billion mouths of its own to feed, China has not been a major exporter of human food to the U.S. But one item in the grocery store that is likely to come from China is garlic. That's worrisome to the California town that has become synonymous with the pungent plant.

Gilroy, Calif., bills itself as the nation's garlic capital and hosts an annual Garlic Festival during the last week of July. Both Gilroy and garlic have come a long way since the festival began almost 30 years ago.

"It was hard to have repeat dates, because you smelled like the garlic," says past festival president Gene Saakahara, who worked in a garlic plant as a college student. "We've come from the stinking rose to now a world-famous festival."

This year's party features a Garlic Idol singing contest. (The prize is 1,000 gallons of gasoline.) And there's an Iron Chef-style cook off, dubbed the "Garlic Showdown."

The real showdown facing the Gilroy industry, though, is with garlic growers across the ocean. Imports of cheap Chinese garlic have surged in recent years, and Americans have snapped it up to fill their growing garlic appetite. Last year, for the first time, garlic imported from China outsold garlic grown in California.

"This is, in essence, the second tidal wave — the real tsunami of Chinese garlic," says trade lawyer Michael Coursey, who represents California growers.

The first wave came in the early 1990s, when China was found to be dumping garlic on U.S. docks below cost. China was slapped with a hefty tariff, which kept the garlic at bay for a few years. But since 2001, imports of Chinese garlic have multiplied 15-fold, while California production has shrunk. Coursey thinks garlic is just the beginning.

"It isn't Airbus," Coursey says. "However, it's a paradigm of what's going to happen in agricultural trade from China in seemingly more important products, if something isn't done."

Since Chinese imports first appeared in the United States, California's biggest garlic packer, Christopher Ranch, has looked for ways to cut its own costs. Garlic bulbs that used to be packed by hand are now weighed on a computer scale and sorted automatically into cartons. Sizes range from "Giant" to "Super Colossal."

In a nearby shed, garlic bulbs are broken into cloves and peeled with a blast of compressed air. Customers seem to like the convenience. Peeled garlic has become the biggest seller for Christopher Ranch. And because the bulbs for processed garlic don't have to look good, they can be harvested by machine, which saves about 10 cents a pound. That's still not cheap enough to compete with Chinese garlic, which wholesales for about half the price.

"They can peel garlic cheaper by hand than we can here with machines," says Managing Partner Bill Christopher.

Fighting Back by Selling Safety

"Between the toothpaste and the dog food and the children's toys, safety and food safety is not a top priority in China, where it is here in the United States," Christopher says. "So if you want to have something that you know is safe, you want to buy from this area."

Of course, California produce caused its own share of food-borne illnesses last year. But the FDA is considering extra scrutiny of food imports from lightly regulated countries, such as China.

California growers also hope to convince price-conscious shoppers that their garlic has more flavor. That view was seconded, after a blind taste test, by Executive Chef Bernard Guillas of the Marine Room restaurant in San Diego.

Most American shoppers don't share the chef's professional palate, which is why supermarket shelves are loaded with Chinese garlic.

But Bill Christopher hopes there are enough consumers willing to pay extra to preserve California's shrinking share of the market. Christopher actually expects to plant more garlic this coming year than he did last year. And he promises the Gilroy Garlic Festival isn't going anywhere.