Accessibility links
Soprano Beverly Sills: A Silvery Voice, Silenced at 78 Beverly Sills, the soprano known for her silvery voice and her irrepressible personality, has died of cancer at age 78. She was remembered for creating a uniquely American heroine — and for her second career as a successful and media-savvy arts administrator and advocate. 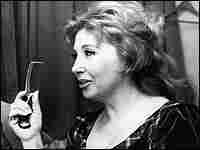 Soprano Beverly Sills (in 1970) is remembered for her high flying trills and her thoughtful interpretations of operatic roles. Getty Images hide caption

See Sills sing some of her signature roles and a performance at age 7.

"Willow, where we met together" from 'The Ballad of Baby Doe' 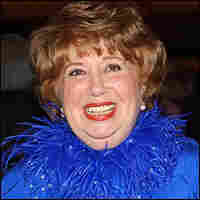 After she retired from the opera stage, Sills took on key executive rolls in arts institutions in New York. Getty Images hide caption

With her bubbly personality and quick wit, it's no surprise that Sills became close friends with comedienne and actress Carol Burnett. The two performed together at the Metropolitan Opera in New York in a Television show called "Sills and Burnett at the Met," mixing music and comedy. Hear Burnett's remembrance of Sills, in conversation with Robert Siegel.

Carol Burnett on 'All Things Considered'

One of this country's great operatic voices has fallen silent: Soprano Beverly Sills, with her soaring, silvery voice and irrepressible personality, died of cancer this evening. She was 78.

She was born Belle Miriam Silverman in New York, and Beverly Sills, as she would eventually rename herself, had her first taste of stardom at age 3, when she was named Brooklyn's "Miss Beautiful Baby 1932." At age 4, she was a regular on the Rainbow House radio show, and at 7 she sang in a film.

As a child performer, Sills was billed as "Bubbles," a nickname that matched her effervescent personality — and one that stuck with her from the very beginning.

"I was born with a big spit-bubble in my mouth, and the doctor had to break it," she once said. "So the doctor said, 'I guess we're going to have to call this one 'Bubbles.'"

Sills was always a go-getter. She was voted most likely to succeed in high school, and in her early years she sang on cruise ships and did one-nighters on the Borscht Belt circuit in the Catskills.

Although she made her operatic debut in 1947, in Philadelphia, her career finally got off the ground when a reluctant impresario at the City Opera of New York finally signed her in 1955. She wasn't getting a lot of attention in those early years, but that's when Sills' voice was in its prime, according to Washington Post critic Tim Page.

"The voice itself had quite a bit of luster," Page says. But "what made it special ... was the freedom that she had; she could just go anywhere with the voice. She also brought real dramatic intelligence to her roles. "

The singer used that dramatic sense and her sparkling personality to great effect in 1959, when she took on the title role in a brand-new opera, Douglas Moore's The Ballad of Baby Doe, based on the true story of a Colorado silver magnate, the young bride he falls for, and the scandals and tragedies they survive.

Baby Doe was a success for Sills, but stardom was still a long way off. She was working hard, essentially as the City Opera's house soprano, always dreaming of singing at the larger Metropolitan Opera. She found her breakthrough role in 1966, when she talked her way into singing Cleopatra in Handel's Julius Caesar at the City Opera.

"I always had a theory that people became a superstar because they could do one thing better than anybody else in the world," she said. "I think there was an aria in Julius Caesar called 'Se Pieta,' and I used to think I sung that aria better than anybody."

Sills' performance turned her into a sensation, almost overnight. A New Yorker magazine critic at the time said, "If I were recommending the wonders of New York to a tourist, I would place Beverly Sills at the top of the list."

But Sills might have pushed herself a little too hard. She finally got her invite to sing at the Met in 1975, but by then her voice was already showing signs of wear and tear. In 1980, at age 51, she retired from singing. She said it was the perfect time to go out — on top.

"There is a kind of desperation, I think, at staying at something too long," she said. "And I was never a desperate woman. I wanted people to say 'It's too early,' rather than 'When is that woman ever gonna quit?' "

Tim Page says Sills did stay too long, and that her recordings, mostly made later in her career, leave a slim legacy of the great singer she was.

And although Sills retired, Page says, she was never out of the spotlight.

"In some ways she became more famous after she stopped singing, because she introduced all these television programs and she went on to to become a big advocate for the arts," Page says. Americans age 40 or younger, he says, "will remember Sills as this happy homemaker, nice lady from Queens with the red hair and the friendly manner, and sort of as a celebrity, rather than as the serious artist that she was."

Sills did go on to be a "serious" arts administrator, taking on significant roles as director of the New York City Opera and chair of both the Lincoln Center and the Metropolitan Opera. She was an organized person who seemed to have a natural ability to charm money out of donors.

Great administrators are rarely remembered, though — and Sills wouldn't have wanted to be remembered as one in any case.

"I want to be remembered as Beverly Sills, opera singer," she said once. "My entire life was spent in preparing for that career, and I was lucky that the preparation paid off."

It did indeed: Sills was first and foremost an opera singer, with an expressive, flexible voice that soared beautifully above an orchestra.

But her later career made her the face of opera for Americans — whether she was portraying queens and courtesans on stage, guest-hosting the Tonight Show, or lifting opera companies out of debt. She did it all with a voice that rang out and a smile that bubbled.