Accessibility links
Glasgow Attack Linked to London Car Bombs British officials on Saturday raised the terror alert level to the highest level "critical," meaning that a terror attack could be imminent. The decision followed three terror threats in the last two days — one in Glasgow, Scotland, on Saturday and two in London on Friday. 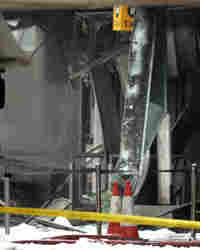 The burned wreckage of a car can be seen in a passenger terminal of Glasgow Airport in Scotland. Kieran Dodds/AFP/Getty Images hide caption

British officials on Saturday raised the terror alert level to critical — meaning that a terror attack could be imminent — as police and terror experts established a link between two car bombs found in London on Friday and Saturday's attack on the Glasgow Airport.

"I can confirm that we believe the incident at Glasgow Airport is linked to the events in London yesterday," Strathclyde Police Chief Constable Willie Rae said on Saturday. "There are clearly similarities, and we can confirm that this is being treated as a terrorist incident."

Meanwhile, Prime Minister Gordon Brown met with counter-terrorism officers at Scotland Yard and top intelligence officers, police and other senior officials after two men drove a flaming Jeep Cherokee into the passenger terminal at the Glasgow Airport in Glasgow, Scotland — the third terror threat to hit the nation in two days.

In a televised address, Brown called on Britons to support the police and be vigilant as the country approached the July 7 anniversary of the London transit attacks that killed 52 people.

"I know that the British people will stand together, united, resolute and strong."

Police in Scotland said two suspects were in custory after Saturday's attack on the Glasgow Airport. One was severely burned and remains in the hospital.

Rae said that a suspect who was detained after the attack and taken to hospital with severe burns had been found to be carrying a "suspicious device", but did not elaborate.

From NPR and The Associated Press reports