Bush Declines to Rule Out Full Pardon for Libby

Bush Declines to Rule Out Full Pardon for Libby 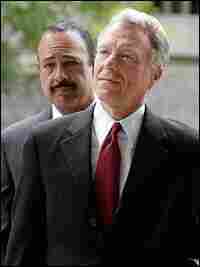 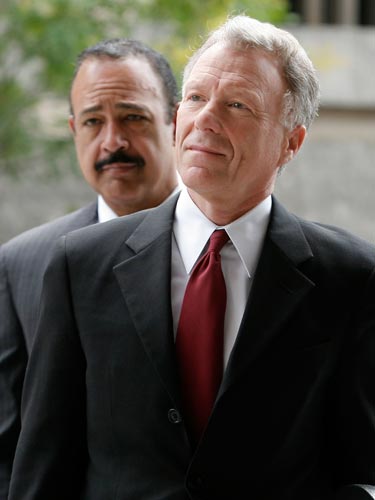 I. Lewis "Scooter" Libby and his attorney Theodore Wells (left) arrive for a hearing at the federal courthouse in Washington, D.C., June 14, 2007.

Hear Columnists from 'The Washington Post' and the 'New York Times'

Follow the twists and turns in the CIA leak investigation that resulted in Libby's conviction — and in a sentence commutation from President Bush.

BY THE PRESIDENT OF THE UNITED STATES OF AMERICA

WHEREAS Lewis Libby was convicted in the United States District Court for the District of Columbia in the case United States v. Libby, Crim. No. 05-394 (RBW), for which a sentence of 30 months' imprisonment, 2 years' supervised release, a fine of $250,000, and a special assessment of $400 was imposed on June 22, 2007;

NOW, THEREFORE, I, GEORGE W. BUSH, President of the United States of America, pursuant to my powers under Article II, Section 2, of the Constitution, do hereby commute the prison terms imposed by the sentence upon the said Lewis Libby to expire immediately, leaving intact and in effect the two-year term of supervised release, with all its conditions, and all other components of the sentence.

IN WITNESS THEREOF, I have hereunto set my hand this second day of July, in the year of our Lord two thousand and seven, and of the Independence of the United States of America the two hundred and thirty-first.

President Bush on Tuesday refused to rule out an eventual pardon for former White House aide I. Lewis "Scooter" Libby.

"As to the future, I rule nothing in and nothing out," the president said a day after commuting Libby's 2 1/2-year prison term in the CIA leak case.

Bush said he had weighed his decision carefully to erase Libby's prison time. He said the jury's conviction of Libby should stand but that the 30-month prison term was too severe.

"I made a judgment, a considered judgment, that I believe was the right decision to make in this case," the president said. "And I stand by it." At the same time, he left the door open for the possibility of a pardon later.

The president's move to commute Libby's prison term for lying and obstruction of justice in the CIA leak case has drawn harsh criticism from Democrats, who said the decision showed the administration's lack of accountability.

Stopping short of issuing a pardon, Mr. Bush issued a statement Monday sparing Libby from prison, but he left in place a $250,000 fine and probation for the ex-chief of staff to Vice President Dick Cheney. The president's announcement came just hours after a federal appeals panel ruled that Libby could not delay his prison term.

Because he was not pardoned, Libby remains the highest ranking White House official convicted of a crime since the Iran-Contra affair.

"I respect the jury's verdict," Mr. Bush said in a written statement. "But I have concluded that the prison sentence given to Mr. Libby is excessive. Therefore, I am commuting the portion of Mr. Libby's sentence that required him to spend 30 months in prison."

The president said his action still "leaves in place a harsh punishment for Mr. Libby."

Special Prosecutor Patrick Fitzgerald disputed the president's assertion that the prison term was excessive. Libby was sentenced under the same laws as other criminals, Fitzgerald said.

"In this case, an experienced federal judge considered extensive argument from the parties and then imposed a sentence consistent with the applicable laws. It is fundamental to the rule of law that all citizens stand before the bar of justice as equals," Fitzgerald said.

Libby's attorney, Theodore Wells, said in a statement that the Libby family was grateful for Bush's action and continued to believe in his innocence.

At the White House Tuesday, administration spokesman Tony Snow told reporters that the president had deliberated for "weeks and weeks" over the decision.

"This is hardly a slap on the wrist in terms of a penalty," Snow said, echoing the president's words.

During the combative news conference, Snow was asked if he meant to suggest that politics played no part in the decision.

"That is correct," he responded sharply.

Snow would not rule out the possibility of a full pardon at some later date. When asked whether Libby had asked the White House for a pardon or commutation of his sentence, Snow said there had been no direct communication.

The leak case has hung over the White House for years. Special Prosecutor Fitzgerald questioned top administration officials, including Bush and Cheney, about their possible roles. And Libby's trial revealed the extraordinary steps the president and vice president were willing to take to discredit a critic of the Iraq war.

Nobody was ever charged with the leak, including Deputy Secretary of State Richard Armitage or White House political adviser Karl Rove, who provided the information for the original article. Prosecutors said Libby obstructed the investigation by lying about how he learned about Plame and whom he told.

Plame said she believes Libby and other White House officials conspired to leak her identity to reporters in 2003 as retribution against her husband, Joseph Wilson, who criticized what he said was the administration's misleading use of prewar intelligence on Iraq.

"This administration is corrupt to the core," Wilson told NPR. "I would only hope that Americans now realize, with this subversion of our system of justice and the rule of law in this country, just exactly how corrupt they are. "

"The Constitution gives President Bush the power to commute sentences, but history will judge him harshly for using that power to benefit his own vice president's chief of staff, who was convicted of such a serious violation of law," Reid he said.

Obama said it was "exactly the kind of politics we must change" while Clinton labeled it a "clear signal that in this administration, cronyism and ideology trump competence and justice."

Already at record lows in the polls, Bush risked a political backlash with his decision. President Gerald Ford tumbled in the polls after his 1974 pardon of former President Richard M. Nixon, and the decision was a factor in Ford's loss in the 1976 election.

Bush's father - former President George H.W. Bush – issued pardons shortly before leaving office in 1992 for former Defense Secretary Caspar W. Weinberger and five other former officials who had served in the Reagan administration. The six were involved in the Iran-Contra affair, in which arms were secretly sold to Iran to win the freedom of American hostages, then the money was funneled to anti-communist guerrillas in Nicaragua despite a congressional ban on military aid.

On Monday, White House officials said Bush knew he could take political heat for commuting Libby's prison sentence and simply did what he thought was right. They would not say what advice Cheney might have given the president.

President Bush issued the following statement on his decision to commute the 2 1/2-year sentence of former White House aide I. Lewis "Scooter" Libby in the CIA leak case. Source: The White House.

The United States Court of Appeals for the D.C. Circuit today rejected Lewis Libby's request to remain free on bail while pursuing his appeals for the serious convictions of perjury and obstruction of justice. As a result, Mr. Libby will be required to turn himself over to the Bureau of Prisons to begin serving his prison sentence.

I have said throughout this process that it would not be appropriate to comment or intervene in this case until Mr. Libby's appeals have been exhausted. But with the denial of bail being upheld and incarceration imminent, I believe it is now important to react to that decision.

After the investigation was under way, the Justice Department appointed United States Attorney for the Northern District of Illinois Patrick Fitzgerald as a Special Counsel in charge of the case. Mr. Fitzgerald is a highly qualified, professional prosecutor who carried out his responsibilities as charged.

This case has generated significant commentary and debate. Critics of the investigation have argued that a special counsel should not have been appointed, nor should the investigation have been pursued after the Justice Department learned who leaked Ms. Plame's name to columnist Robert Novak. Furthermore, the critics point out that neither Mr. Libby nor anyone else has been charged with violating the Intelligence Identities Protection Act or the Espionage Act, which were the original subjects of the investigation. Finally, critics say the punishment does not fit the crime: Mr. Libby was a first-time offender with years of exceptional public service and was handed a harsh sentence based in part on allegations never presented to the jury.

Others point out that a jury of citizens weighed all the evidence and listened to all the testimony and found Mr. Libby guilty of perjury and obstructing justice. They argue, correctly, that our entire system of justice relies on people telling the truth. And if a person does not tell the truth, particularly if he serves in government and holds the public trust, he must be held accountable. They say that had Mr. Libby only told the truth, he would have never been indicted in the first place.

Both critics and defenders of this investigation have made important points. I have made my own evaluation. In preparing for the decision I am announcing today, I have carefully weighed these arguments and the circumstances surrounding this case.

Mr. Libby was sentenced to thirty months of prison, two years of probation, and a $250,000 fine. In making the sentencing decision, the district court rejected the advice of the probation office, which recommended a lesser sentence and the consideration of factors that could have led to a sentence of home confinement or probation.

I respect the jury's verdict. But I have concluded that the prison sentence given to Mr. Libby is excessive. Therefore, I am commuting the portion of Mr. Libby's sentence that required him to spend thirty months in prison.

My decision to commute his prison sentence leaves in place a harsh punishment for Mr. Libby. The reputation he gained through his years of public service and professional work in the legal community is forever damaged. His wife and young children have also suffered immensely. He will remain on probation. The significant fines imposed by the judge will remain in effect. The consequences of his felony conviction on his former life as a lawyer, public servant, and private citizen will be long-lasting.

The Constitution gives the President the power of clemency to be used when he deems it to be warranted. It is my judgment that a commutation of the prison term in Mr. Libby's case is an appropriate exercise of this power.