Accessibility links
The Roberts Court and the Role of Precedent With new Chief Justice John Roberts at the helm of the U.S. Supreme Court and Justice Samuel Alito replacing Justice Sandra Day O'Connor, the direction of the court has changed. Both promised to honor precedent — but in their first full term together they reversed a number of key precedents.

Listen
The Roberts Court and the Role of Precedent 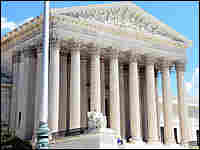 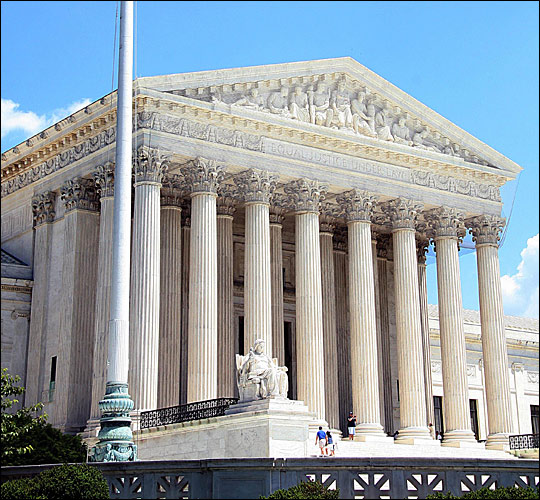 Conservatives are making their mark on the U.S. Supreme Court.

For decades conservatives have yearned for control of the U.S. Supreme Court.

For decades, they have been frustrated in achieving that goal, despite having as many as seven Republican appointees on the court. This term, though, conservatives seem to have reached the promised land. With new Chief Justice John Roberts at the helm and Justice Samuel Alito replacing justice Sandra Day O'Connor, the direction of the court for this term, at least, has been transformed.

The court upheld a federal law banning so called partial-birth abortions, though it had struck down a nearly identical law just seven years ago. The court effectively eviscerated a key provision of the McCain-Feingold campaign finance law, even though the court had upheld that provision just three years ago.

On school desegregation, the court limited the ability of school boards to adopt voluntary desegregation plans that use race as a factor in assigning some students to schools.

In each of these decisions, the key votes in the majority claimed to be adopting a modest and limited approach.

"What we actually have is a pretty bold conservative agenda but it's clothed in the gentle language of traditional modesty and restraint," says Kathleen Sullivan, director of the Stanford Law Constitutional Law Center.

Or, as Stanford Professor Pam Karlan puts it, "I think, practically, the court has overruled a number of cases. But the chief can say with a straight face, 'I didn't vote to overrule it. I simply limited the earlier decisions to its facts, or I refused to extend the earlier decision.'"

The court was more polarized than at any time in recent memory, with fully one-third of the court's decisions reached by a 5-to-4 vote, and the liberals spoke with an unusually unified voice in dissent. As Justice Stephen Breyer put it in the school desegregation case: "It is not often in the law that so few have so quickly changed so much."

The court's new swing justice, Anthony Kennedy, was in the majority in each of the 24 5-to4 rulings. And Supreme Court scholar Tom Goldstein says Kennedy's influence has been significant.

Notre Dame Law School Professor Rick Garnett says Kennedy's role is clear. "Justice Kennedy sees himself as the justice who is mediating between these two increasingly polarized ways of understanding the constitution and seems to me that he is likely to be relishing it," says Garnett.

But all is not peace and love on the conservative side of the court.

Justices Antonin Scalia and Clarence Thomas, in a number of cases, wanted to go farther than Roberts and Alito. In the campaign finance case, Scalia accused Roberts of effectively overruling the court's past decision without saying so. This faux judicial restraint, said Scalia, is judicial obfuscation.

"Justice Scalia is saying in his opinion that the chief justice's modesty, his unwillingness to overturn these longstanding precedents is actually phony. That he's not being honest about how conservative he is," says Goldstein.

Sullivan says Scalia and Thomas have a very different approach from Roberts and Alito.

"It's as if Justices Scalia and Thomas would like to come in and blow things up. And Chief Justice Roberts and Justice Alito take some of these old precedents, and, instead, they chip away at the foundations, so that they'll blow over in a strong wind, but it's a very different approach."

George Mason University Professor Neomi Rao is a former law clerk for Justice Thomas. "There's an agreement perhaps amongst some of the conservatives and some of the liberals that the minimalists as it were are being less than forthright in what they're doing," she says.

Ted Olson, who served as solicitor general in the first Bush administration, says Scalia is worried about not solidifying the new conservative approach while he can.

"I think he's looking into the future, who's going to be the next justice on the court and how will that change the balance and if the court doesn't do away with precedents that he thinks are unacceptable and wrongly decided they're going to be around to bite him later on," Olson says.

But Columbia Law School Professor Michael Dorf, a former Kennedy clerk, says that Justice Kennedy, who so often cast the pivotal, fifth vote, is more temperamentally in tune with the more modest approach.

"Part of what you're seeing may be that he finds Roberts and Alito less scary than Justices Scalia and Thomas because they aren't bomb throwers, and it's possible that the Roberts strategy of incremental moves and not acknowledging when he's overturning precedents is appealing to Justice Kennedy," says Dorf.

What's more, says Goldstein, conservatives still win in the end. "The differences between the conservatives don't amount to a hill of beans. It's all about theory, in practice five justices on the right agreed on the result and were willing to change the law in the direction the thought it had to go," says Goldstein.

No case better illustrates that than the abortion case. Not only are states now freer than before to regulate abortion, many observers note how the court's emphasis has changed dramatically, from the doctor and the patient, to the unborn child.

George Annas, chairman of the Department of Health Law, Bioethics and Human Rights at Boston University, contends that, until this term's abortion decision, most scholars considered the doctor-patient relationship to be protected in some fundamental constitution sense.

"That as long as physicians were practicing for the best interests and health of their patients, with their patients' informed consent, and consistent with good medical practice, the government could not interfere with that relationship. That no longer is the law," says Annas.

In many cases this term, the court's majority did not rule on the merits of a case, but ruled that individuals had no right to be in court. For example, the court, by a 5-to-4 vote, ruled that taxpayers could not challenge the president's faith-based initiative in court.

One small case that many scholars consider emblematic of the court's new formalism was a ruling that a convicted defendant had lost his right to appeal because his lawyer relied on a judge's order to file the appeal within 17 days, instead of the 14 days in the statute. The judge had erroneously factored in the weekend in setting the deadline. The court's five-justice majority overruled a line of previous decisions, to say there should be no flexibility when such errors inadvertently occur.

"These results strike me as simply mean, in that they enforce a kind of strict letter of the law approach, with out any obvious benefit. This struck me at least as something out of a Dickens novel, or perhaps even Kafka," says Dorf.

That echoes what the four, liberal dissenters said in many cases, but they did not prevail.

At his confirmation hearing, Roberts said he viewed the role of a judge as that of an umpire, to call balls and strikes.

"One of the most famous umpires in major ball history, Bill Klem, was once asked, 'Was that a ball or a strike,' and he said, 'You know, it's not a ball or a strike until I say it is.' So this idea of the umpire as someone who just follows a rule book, has been kind of exploded this term," says Karlan.