Accessibility links
Wilson Lambastes White House on Libby Case Former Ambassador Joseph Wilson says President Bush short-circuited the justice system and circumvented the rule of law when he commuted the prison sentence of I. Lewis "Scooter" Libby. Wilson is the husband of Valerie Plame, the CIA operative whose identity was leaked. 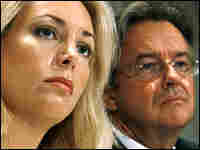 President Bush's decision to commute I. Lewis "Scooter" Libby's prison sentence proves that "this administration is corrupt to the core," said Ambassador Joseph Wilson, the former diplomat whose wife was at the center of the CIA leak investigation that sparked the Libby case.

In denouncing the Bush administration, Wilson told NPR, "I would only hope that Americans now realize, with this subversion of our system of justice and the rule of law in this country, just exactly how corrupt they are."

After Wilson wrote skeptically about U.S. claims that Iraq was shopping for enriched uranium in Africa, his wife, Valerie Plame, was identified as a CIA analyst in a syndicated newspaper column. The charges against Libby grew out of an investigation into the leak of Plame's identity.

Libby, the former chief of staff to Vice President Dick Cheney, was convicted in March of perjury and obstruction of justice. He was sentenced to two-and-a-half years in prison and fined $250,000.

"To his supporters who say [Libby] was a fall guy — that may well be," Wilson said. "But, a fall guy for who? That is the question that is still on the table."

Wilson told NPR that he is not surprised President Bush commuted Libby's prison sentence. Noting that President Bush does not give pardons or clemency lightly, Wilson suggested there may be a quid pro quo exchange for commuting Libby's sentence — and that it should be challenged.

"Congress ought to conduct an investigation of whether or not the president himself is a participant in the obstruction of justice," Wilson said, urging that it examine the text of Special Prosecutor Patrick Fitzgerald's interviews with President Bush and Vice President Cheney.

In 2002, Wilson traveled to Niger to investigate claims that Iraq had tried to purchase uranium yellowcake there. He found there was no truth to the story. Still, the Bush administration cited the yellowcake claim as evidence of Iraq's nuclear ambitions.

Wilson went public with his findings in 2003, undermining the administration's justification for the war in Iraq.

White House aides told reporters that Wilson's mission to Niger was the idea of his wife, who worked for the CIA.

Plame has said little throughout the investigation. Regarding Plame's reaction to President Bush's decision to commute Libby's sentence, Wilson said, "I think it's safe to say that she shares my views."

Wilson says President Bush has made himself an accessory to the obstruction of justice and has removed "all incentive for Mr. Libby to address directly and truthfully the whole question of the role of the president and vice president."

"This was an act of betrayal of the national security of the country," Wilson said, regarding the disclosure of his wife's identity. "It was a very serious crime, and Americans know the difference between right and wrong."