Accessibility links
Oscar Peterson's 'Jazz Odyssey' As a youngster, Oscar Peterson remembers sneaking downstairs while his parents slept so he could to listen to jazz on the radio. Years later, the pianist found himself accompanying many of the artists he first heard as a kid, including Ella Fitzgerald, Lester Young and Dizzy Gillespie. Hear the second part of the interview.

Pianist Looks Back at His Life Among Legends 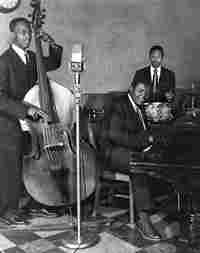 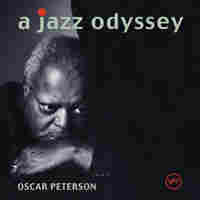 As a youngster, Oscar Peterson remembers sneaking downstairs while his parents slept to listen to the radio. "[I] put my ear right to the speaker and listen to Duke (Ellington) and (Count) Basie and Artie Shaw," the legendary jazz pianist tells NPR's Bob Edwards in a Morning Edition interview. "The volume would be way, way down low so I wouldn't wake my parents... and I'd be ingesting all this wonderful music."

Peterson says he studied those artists and even played along with their records "so that when I had to play with them in person, I sort of had a bit of a jump on their musical personality."

Peterson, 77, has lived a musician's dream for more than half a century. He's received dozens of awards — including seven Grammys — and several organizations have recognized him with lifetime achievement awards. He's made so many records, either as a leader or a sideman, that he's lost count.

As Edwards reports, Peterson studied classical piano while growing up in Montreal, but was seduced by jazz. After performing with the Jazz at the Philharmonic concert series in the United States, he found himself accompanying many of the artists he first heard as a kid, including Ella Fitzgerald, Lester Young and Dizzy Gillespie.

Peterson was heavily influenced by Art Tatum, whose style combined technical virtuosity with a driving rhythm and nonstop melodic improvisations. Peterson's father, Daniel, introduced his precocious son to a Tatum recording. "I remember saying, 'Hey, that's wild. Who are those guys?'" Peterson says. His father replied that it was one man producing all those sounds. "I didn't believe him for a while," Peterson says.

In his autobiography, A Jazz Odyssey, Peterson says like all his siblings, he started out studying classical music. But he was more interested in playing baseball than piano. His father, a porter for the Canadian Pacific Railway, doled out musical assignments for his children, to be completed when he returned from his trips. Peterson proved to be a quick study. He would spend all week playing baseball and still learn enough piano to impress his father upon his return. Peterson did it by listening to his sister, Daisy, who had practiced diligently.

Peterson made his U.S. debut in 1949 — at Carnegie Hall. Jazz impresario Norman Granz recruited Peterson for his Jazz at the Philharmonic tour, an effort to elevate jazz from smoky bars to concert halls, Edwards reports. The concerts featured the elite of the jazz world, including Ella Fitzgerald.

Peterson also played and recorded with another great female vocalist of the era, Billie Holiday. He recalled one concert that went poorly. Holiday was addicted to drugs, and although she was not high for the first set, she apparently encountered a supplier during intermission. Holiday was to perform "I Only Have Eyes For You," but was "almost paralyzed" at the microphone, Peterson says. "She just stood there. [I] played the intro over, she just stood there. I think we played it four times, then we realized she wasn't well. [It was a] pretty bad night."

Peterson managed to avoid the drug scene that captured so many of his contemporaries.

When invited to join in, Peterson had a standard reply: "I promised my mom I wouldn't get into any of this and if she were ever to hear any of this, it would kill her. And besides that, if I ever get busted down here in the United States, they'll never allow me to cross the border again. And between those two things it sort of got me through a lot of that."

Although slowed by a stroke in the 1990s, Peterson still travels extensively from his home outside Toronto. This summer, he's scheduled to perform concerts in Chicago and on the West Coast.

Listen to a preview of Bob Edwards' Morning Edition interview with Oscar Peterson.
Hear a Sept. 17, 1999, All Things Considered report on the 50th anniversary of Oscar Peterson's American debut at Carnegie Hall.
Listen to Peterson tell a story about playing cards with pianist Art Tatum and bassist Ray Brown.
Read about Oscar Peterson and other pianists at the NPR Marian McPartland's Piano Jazz Web site.

Oscar Peterson's The Sound of Trio is part of the NPR Basic Jazz Record Library of recommended albums.
Explore more jazz features at NPR Jazz.
The official Oscar Peterson Web site includes career highlights, a journal by the pianist, musical samples and a list of his "favorite musical moments."
See historic photos, an Oscar Peterson biography and discography at the National Library of Canada site.
Learn about an exhibition on Oscar Peterson at the Canadian Embassy in Washington, D.C.