Accessibility links
Jack Kerouac's Famous Scroll, 'On the Road' Again Did Jack Kerouac really write On the Road in a drug-fueled three-week frenzy? Yes — and no. Whether you believe the legend or not, it's 50 years since the event, and the 120-foot scroll is on tour to celebrate the anniversary. 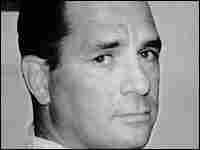 Beat writer Jack Kerouac, pictured in 1965, cultivated the myth that On the Road came to him in a three-week rush, but the truth is he wrote, rewrote and revised again. Hulton Archive/Getty Images hide caption

Revisit NPR's 'Present at the Creation,' a Multimedia Exploration of 'On the Road' 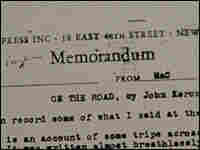 Malcolm Cowley to Viking Press, 1953: "There is a book here that should and must be published." hide caption 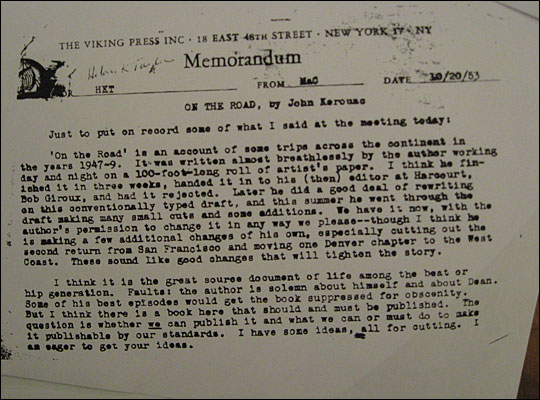 Malcolm Cowley to Viking Press, 1953: "There is a book here that should and must be published." 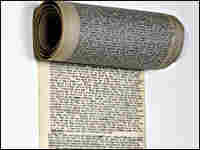 For the 50th anniversary of its publication, Kerouac's On the Road scroll is on the road. Right now it's in Lowell, Mass., where the writer was born in 1922 and buried in 1969. Christies hide caption

This September marks 50 years since Jack Kerouac's On the Road hit bookshelves, stirred controversy and spoke — in a new voice — to a generation of readers. Today the beat travelogue continues to sell 100,000 copies a year in the U.S. and Canada alone.

Legend has it that Kerouac wrote On the Road in three weeks, typing it almost nonstop on a 120-foot roll of paper. The truth is that the book actually had a much longer, bumpier journey from inspiration to publication, complete with multiple rewrites, repeated rejections and a dog who — well, On the Road wasn't homework, but we all know what dogs do.

But the scroll: That part's true. Jim Canary, the Indiana University conservator who's responsible for its care, says Kerouac typed about 100 words a minute, and replacing regular sheets of paper in his typewriter just interrupted his flow — thus the scroll.

But Kerouac's brother-in-law and executor, John Sampas, says the three-week story is a kind of self-created myth. "Three weeks" is what Kerouac answered when talk-show host Steve Allen asked how long it took to write On the Road.

"And so this gave the impression that Jack just spontaneously wrote this book in three weeks," Sampas says. "I think what Jack should've said was, 'I typed it up in three weeks.'"

"Kerouac cultivated this myth that he was this spontaneous prose man, and that everything that he ever put down was never changed, and that's not true," Marion says. "He was really a supreme craftsman, and devoted to writing and the writing process."

In truth, Marion says, Kerouac heavily reworked On the Road — first in his head, then in his journals between 1947 and 1949, and then again on his typewriter.

Between 1951 and 1957, Kerouac tinkered with as many as six drafts in a desperate attempt to get editors to accept his work, according to Sampas. A letter from Kerouac to fellow beat writer Neal Cassady, dated June 1951, complains about a rejection from one publisher and mentions that Kerouac is shopping for an agent.

That agent was Sterling Lord, who says he was immediately taken with the power of Kerouac's unconventional tale.

"I didn't ever dream that this would be the huge seller that it has become — although I didn't think it wouldn't — but I felt that Jack's was a very important new voice and he ought to be heard," Lord says. "And I was totally convinced of that."

Lord pitched On the Road to publishing house after publishing house, only to be told the manuscript was "unpublishable." He says one of the book's biggest advocates was author and editor Malcolm Cowley, an adviser to Viking Press — and even he had reservations, expressed in an internal memo dated 1953, with a paragraph headlined "Faults":

"The author is solemn about himself and about Dean," Cowley wrote. "Some of his best episodes would get the book suppressed for obscenity but I think there is a book here that should and must be published."

Despite that endorsement, Viking rejected On the Road. It went on to EP Dutton, where it also languished, and Kerouac complained in a May 1954 letter to Allen Ginsberg that yet another publisher "is sitting on 4 of my pieces. All of the others are in my agent's drawers unread and dusting. What the hell is the use?"

And so it went, until the mid-'50s, when a new crop of young, receptive editors — and enthusiastic response to On the Road excerpts printed in The Paris Review — helped persuade Viking to publish it. They offered a $900 advance; Lord talked them up to $1,000, but the publisher, fearing the author would squander the money, insisted on paying it out in $100 installments.

"It didn't make any difference to Jack," Lord says. "He had a publisher."

But On the Road's journey didn't end there. Viking sent the manuscript to lawyers who wanted the names of real people, such as Ginsberg and Cassady, changed for fear of libel. Other things were edited, too. Conservator Jim Canary is fond of pointing out the differences between the original scroll and the published book.

"In the book, it says 'My aunt once said the world would never find peace until men fell at their women's feet and asked for forgiveness, but Dean knew this,'" Canary points out. In the scroll, though, the passage went on:

My mother once said the world would never find peace until men fell at their women's feet and asked for forgiveness. This is true all over the world in the jungles of Mexico, in the back streets of Shang Hai, in New York cocktail bars, husbands are getting drunk while the women stay home with the babes of their ever darkening future. If these men stop the machine and come home and get on their knees and ask for forgiveness and the women bless them peace will suddenly descend on the earth with a great silence like the inherent silence of the apocalypse.

Kerouac reportedly complained to Allen Ginsberg that Viking botched his manuscript. Lord, his agent, says the editing was handled gracefully.

One thing that may never be known is how Kerouac wrapped up the story the first time, back in 1951.

"The very end of the scroll is missing, and it's just a ragged edge," says Canary. "Jack wrote on there, 'Ate by Patchkee, a dog' — and that was Lucien Carr's cocker spaniel.

"We don't really have the original ending."

Kerouac's 'On the Road' Manuscript Unfurled

Kerouac's 'On the Road' Manuscript Unfurled

A view of Kerouac's 120-foot-long manuscript for On the Road as it is unrolled. Courtesy of Christie's hide caption

Read the Beginning of the Scroll
toggle caption
Courtesy of Christie's

The legend behind the writing of Jack Kerouac's On the Road is well known, if not entirely accurate. Fueled by inspiration, coffee and Benzedrine, Kerouac sat down at his typewriter and -- in one burst of creative energy -- wrote the novel that would make him the voice of his generation in just 20 days, typing it out on a single, 120-foot-long scroll.

Kerouac actually spent much more time laying the groundwork for his novel than that creation myth suggests, but the part about the giant scroll manuscript is true. Now for the first time, the unfurled scroll has gone on display at the University of Iowa Museum of Art in Iowa City. It will travel next to the Las Vegas Public Library.

Present at the Creation: Learn the true story behind the origins of On the Road, and hear and see Kerouac read portions of his manuscript.

Behind Kerouac's 'On the Road'

The giant scroll, which can be seen from end to end, is being housed under glass in a gallery long enough to contain its full length when unrolled. However, its ending is missing -- it was reportedly chewed by a dog.