Accessibility links
'Rescue Dawn': Back to the Jungle, With Stars All Things Considered film critic Bob Mondello reviews a Vietnam War film from Werner Herzog. Herzog had told this same story before, in a documentary. This time he cast Christian Bale as captured U.S. fighter pilot Dieter Dengler.

Listen
'Rescue Dawn': Back to the Jungle, With Stars 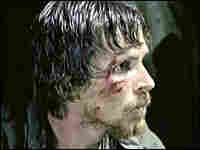 It was supposed to be a "routine" bombing mission, but it becomes a lot less routine when the squadron crosses over into Laos: Dieter Dengler's plane is brought down by anti-aircraft fire.

Though he survives the crash unhurt, he's captured by enemy soldiers who try to get him to condemn U.S. involvement in Vietnam. This is near the very beginning of the American buildup, which may be why Dengler sounds as if he's still fighting World War Two: "I love America," he says, refusing to sign the document. "America gave me wings."

But the world is shifting. Dengler has his face tied to a huge nest of insects, gets dragged behind oxen and is very nearly drowned — and when he remains unbowed, he's thrown into a jungle prison camp where two other American soldiers have clearly been held for some time. They're emaciated, speak only in whispers, and after many months in the camp, they think Dengler's dreams of escape are just dreams. There's no water, this being the dry season; without it, an escapee wouldn't last more than a day or two on the run. "The jungle is the prison," one hisses. "Don't you get it?"

Everyone in the camp, guards included, is starving on a diet of rice when they can find it, worms and grubs when they can't. Dengler figures if they don't move fast, none of them will have strength for a cross-jungle escape. Then one of the Laotian prisoners hears the guards talking, and their situation gets even more urgent: There's a rice shortage, and the guards are planning to kill the prisoners they can't manage to feed any longer.

Director Werner Herzog has always specialized in stories about epic journeys and impossible dreams, which may be why he's able to make all of this feel as persuasive as it's ever likely to feel in a movie with recognizable stars. Christian Bale's Dengler comes across as practical and determined, which in these circumstances registers as heroic. And as his fellow prisoners, Steve Zahn and Jeremy Davies cower so effectively that you're soon seeing their guards through their eyes.

For a director whose films usually traffic in breathtakingly offbeat imagery and what's sometimes termed "ecstatic truth," Rescue Dawn is startlingly straightforward; any connections an audience wants to make to other wars and other prison camps, it'll have to make on its own.

And early on, Herzog seems to be doing almost too good a job of conveying the tiresomeness of prison life. But as the film accelerates in its last half hour, only art-house purists are going to complain that their favorite director has gone Hollywood. Rescue Dawn may not feel much like a Herzog movie, but it's a gripping real-life thriller.