Accessibility links
The Burqa As Disguise: Not So Fool-Proof Firebrand cleric Abdul Aziz was nabbed after a female police officer tried to search his body, which was concealed by a full-length black burqa. Aziz's escape attempt was doomed — and he's not the first to be failed by the burqa disguise. There is even a new Pakistani horror movie featuring "Burqa Man."

The Burqa As Disguise: Not So Fool-Proof

The Burqa As Disguise: Not So Fool-Proof 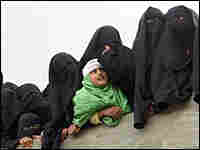 The crisis for Abdul Aziz and the Red Mosque has been brewing for some time. In April, Burqa-clad female students gathered on the roof of Jamia Hafsa school in support of Aziz and his Taliban-style anti-vice drive. Aamir Qureshi/AFP/Getty Images hide caption 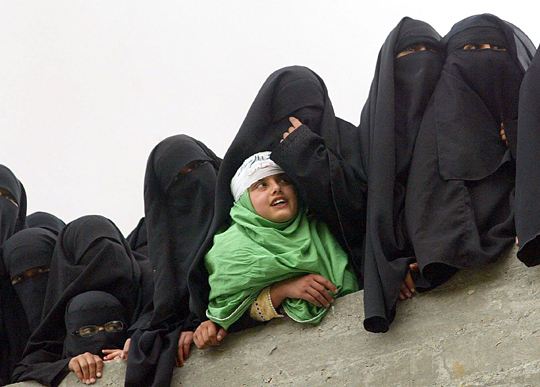 The crisis for Abdul Aziz and the Red Mosque has been brewing for some time. In April, Burqa-clad female students gathered on the roof of Jamia Hafsa school in support of Aziz and his Taliban-style anti-vice drive. 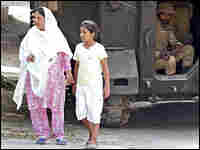 Pakistani residents walk past soldiers after a curfew was relaxed in the vicinity of the Red Mosque in Islamabad. Aamir Qureshi/AFP/Getty Images hide caption 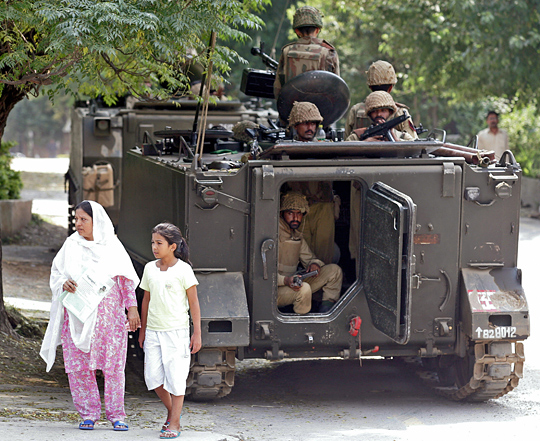 Pakistani residents walk past soldiers after a curfew was relaxed in the vicinity of the Red Mosque in Islamabad. 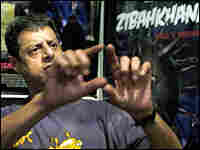 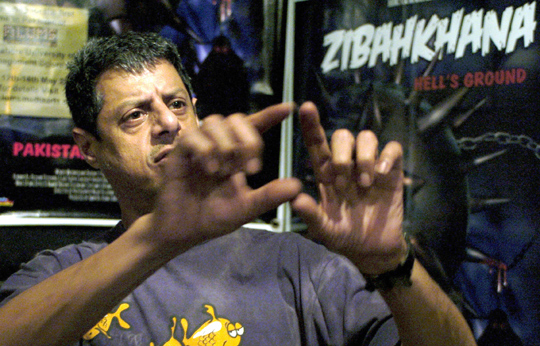 Firebrand cleric Abdul Aziz was nabbed Wednesday evening after a female police officer who was checking a crowd of women fleeing Islamabad's Red Mosque tried to search his body, which was concealed by a full-length black burqa.

Aziz's adoption of the burqa as his means of escape is not as novel as it may seem at first glance. There are numerous cases on record of men resorting to the full-body gown — a centuries-old tradition now commonly associated with the Taliban's rule of Afghanistan — to elude capture.

Men in England, Afghanistan, Pakistan, Canada, and the United States have tried the burqa ruse in the past year alone.

In February, a British court considering the case of 26-year-old Yassin Omar, one of the men accused of trying to blow up the London underground on July 21, 2005, was shown video footage of Omar in a bus station the day after the attempted bombings took place. For fear of arrest, the 6-foot-2-inch Omar had disguised himself by wearing a black burqa. He was also carrying a woman's purse.

In November 2006, two men robbed an Ontario, Canada, jewelry store, after entering in the guise of a Muslim couple — one was wearing a burqa — to put the shop owner at ease. They then produced a gun, secured the owner with duct tape, and took most of his stock.

And in June 2006, two young British men proved the ploy is open to all religions. After putting on burqas they had stolen from a mosque, Anthony Roberts, 22, and Nicholas Bidar, 19, robbed a London bank and were arrested. They had fled the scene on foot — presumably no easy task in a full-length covering.

That case and others like it led National Review writer Daniel Pipes last year to call for banning the burqa and the niqab — a full-head covering common in the Middle East.

The close link of the burqa to sexual identity has also been exploited by women — in at least one instance, an Afghan woman disguised her 12-year-old daughter as a boy so that she could work under the Taliban regime.

It seems that Aziz's escape-by-burqa attempt was doomed from the start. The women he attempted to blend in with ranged in age from teenagers to mid-30s. Security personnel cited Aziz's pot belly and "unusual demeanor" as giveaways.

Still, the donning of a burqa by Aziz has brought him disdain in Pakistan.

"The attempt by the main cleric to escape in a group of women wearing burqas has actually made him a butt of jokes in the country," Absar Alam of Pakistan TV's Geo News told NPR.

"And people are questioning his commitment with his cause," Alam said. "They say he was actually escaping like a coward."

The burqa's success as a disguise seems linked to the views — not merely the vision — of those it is meant to deceive. It is not difficult to imagine how, to an Islamist extremist, the sanctity of the burqa would seem inviolable.

That could help explain why Western journalists, like the BBC's John Simpson, have successfully donned burqas to avoid trouble with religious militants in Afghanistan.

In a sense, then, the increasing unreliability of the burqa to elude one's pursuers could be a sign that security personnel in Pakistan and other countries are under secular, not religious, control.

Or, it could simply mean that Pakistani police checked out the new horror movie Hell's Ground, which premiered in Islamabad in June. The film — known as Zibahkhana in Pakistan — features a murderer known as "Burqa Man" who, as the genre's tradition demands, brutally punishes teenagers who have chosen to misbehave out in the middle of nowhere.

Director Omar Ali Khan, who also runs a chain of ice cream shops, told the news agency Agence France-Presse that he developed a burqa phobia as a child.

"The image of a woman shrouded in such a cloth would remind me of a ghost," Khan told the AFP. "To me, it was a dehumanizing outfit."

That may have been what Indian singer and actor Himesh Reshammiya was counting on when he turned to a burqa as a means of entering the shrine of Hazrat Khwaja Moinuddin Hassan Chishti, a medieval Muslim saint, without attracting attention.

After being recognized at the shrine, Reshammiya faced an outpouring of anger, despite his assurances that the move wasn't a publicity stunt for an upcoming movie, his first. Instead, he said, his visit was merely to pray for the film's success.

But as Aziz can now attest to, entering — or leaving — a religious site wearing a burqa is not the easy guarantee of anonymity that it first might have seemed to be.