Accessibility links
Adrienne Young: Planting the Earth, Growing Herself Adrienne Young is a folk-country musician who is also a big supporter of community gardens and sustainable farming. As she tours the U.S., she invites local organic farmers to speak before her shows. Her green activism also explains the title of her new album, Room to Grow. 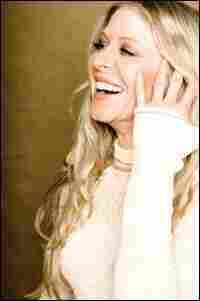 Adrienne Young has become something of a darling of the folk-bluegrass-country set. Thomas Petillo hide caption

'All for Good' from Room to Grow

Folk-country musician Adrienne Young is a big supporter of community gardens and sustainable farming. She puts complimentary packets of seeds in her CDs, and as she tours the U.S., she invites local organic farmers to speak before her shows. Her green activism also explains the title of her new album, Room to Grow.

Young self-produced her new CD and released it on her own label. She plays banjo and guitar, and writes most of her own songs. She has pretty much carved out a music career single-handedly, becoming something of a darling of the folk-bluegrass-country set.

Young is a seventh-generation Floridian, and was deeply inspired by her grandparents who live in Tallahassee. Her grandmother, Frances Booth, is a singer and musician; she's married to Willis Booth, a mandolin player and a retired Chief of Police for the State of Florida.

Aside from music, another big part of this family's heritage is gardening and citrus farming. One of Young's ancestors is credited with bringing the first grapefruit to Florida from the Bahamas in the early 19th century. But Young says the agricultural tradition almost stopped with her own parents who were "much too busy to plant things." They divorced when she was a teenager. Young says she spent a lot of time at her grandparents when she was growing up. Both sets had gardens.

"So that was something I equated with a more traditional familial experience," Young says, "where you slowed down and didn't have to talk all the time and just kind of putter with purpose."

Young says her parents' divorce set her on a search for something to belong to. First it was the Grateful Dead. Then it was living and working on an organic farm. At the end of the day, everyone who worked there would eat together.

Today she lives in Nashville, Tenn. Many of her songs are about searching for a little inner peace and quiet.

Young's lyrics are introspective. But talking to her, she lights up on the topic of sustainable farming. She has an almost encyclopedic knowledge of organic farms around the country.

Young is donating a portion of every CD she sells to a fund called "Save A Seed." She has impassioned views on the role that plants and nutrition play in society, and says that people should want to grow whether it's cultivating the earth or simply living life.