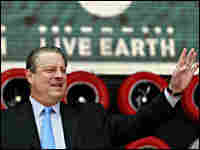 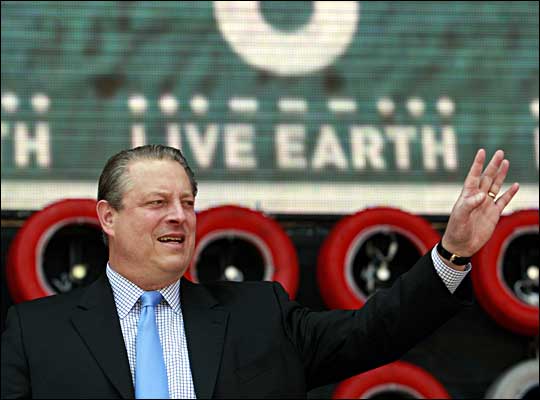 Cities from Rio to London to Shanghai to East Rutherford, N.J., are hosting mass concerts as part of Live Earth, a 24-hour concert series taking place on all seven continents. The series is intended to raise awareness about solutions to climate change. Concert organizers are required to try to minimize waste by using renewable sources of electricity and recyclables, among other guidelines, but critics say that a worldwide rock concert with some musicians traveling in private jets is inherently not "green."

Scott Simon talked to former Vice President Al Gore, who has been at the forefront in the debate over global warming and is chairman of the Alliance for Climate Protection, a partner of Live Earth.

Is there something incongruous in you flying around the country in a huge, air-polluting airplane and shouting "global warming, global warming"?

Well, our whole civilization has a pattern that has developed over the last 150 years that makes it easy to participate in generating the global warming pollution, but many of us have long since become what's called 'carbon neutral.' I'll be traveling by Amtrak from the first of these concerts in North America on the Mall to Giants Stadium, and the concerts themselves will set a new green standard.

Well, the phrase is actually used to mean two things: reducing CO2 pollution as much as you can and then through the use of offsets, verifiable, audited reductions of CO2 emissions elsewhere to have a net impact of zero or less.

I wonder, in this day and age when, as you know, there are so many other ways of communicating with people and making them part of the same mass event. Since you're urging other people to refine the way they live and find solutions, wouldn't it make more sense to not have seven locations on the planet where you're gathering a large group of people together and all that implies—rather than, for example, you're reaching millions of people as we're talking now.

Not two billion people, and a huge amount of attention has gone into minimizing the carbon impact. Many of these great acts are performing near their own homes. Jon Bon Jovi, for example, lives in New Jersey and will be performing at the Meadowlands. Jon incidentally has the number one album in the world this week. Madonna will be performing near her home in London, at Wembley Stadium. Many of the acts have actually been in the vanguard of awareness and activism on the environment. Others are new to the cause, and we welcome them because music connects with people in a way that no other medium does. And this is a planetary emergency, and the only way we can solve it is by getting the word out to enough people to create a sea change in public opinion worldwide.

Mr. Gore, I saw you on "The Today Show," and you convinced me you don't want to run for president. Is there something I missed?

No, I don't have any plans to be a candidate.

That's not the same thing now.

Well, it's the nuance you may have heard me repeat, but it's one that has a purpose. I haven't made a so-called Sherman statement, but the reason for not doing so isn't an effort to be coy and leave the door open for running. It's just there's no reason to do that. But I'm involved in a completely different kind of campaign – to try to change the minds and hearts of people all over this country and in the rest of the world about this climate crisis. And we are making a little progress worldwide, but we're still nowhere close to where we need to be in convincing the majority in every country to demand of their leaders in every party that we make the major changes necessary to avoid causing catastrophic damage to the Earth's climate. I'm a father, and I'm a grandfather. This generation owes it to those who come after us to do the right thing, and I make no apologies for focusing my energies and attentions on trying to come up with the best, most effective, imaginative solution to this crisis.