Accessibility links
A Family Vacations Amidst Changing Landscape While some may escape to sandy beaches on their summer family vacations, two climate scientists have opted for a less-common destination — the American Southwest. The Arizona couple take their children on an exploration of a changing landscape shaped by drought. 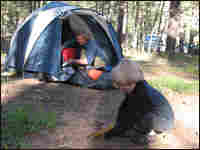 Jonathan Overpeck and son Jackson, 5, set up camp during the family's trip to explore the effects of drought on the Southwest. Richard Harris, NPR hide caption 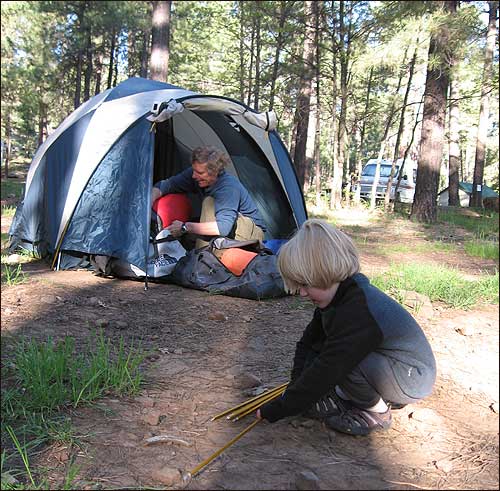 Jonathan Overpeck and son Jackson, 5, set up camp during the family's trip to explore the effects of drought on the Southwest. 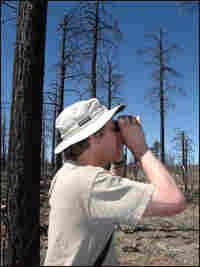 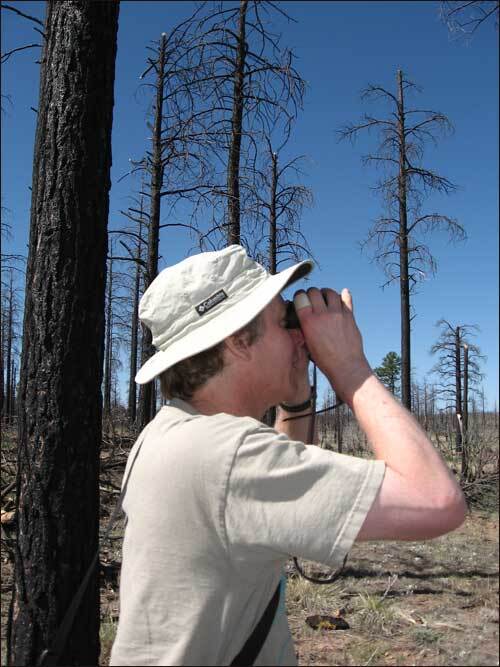 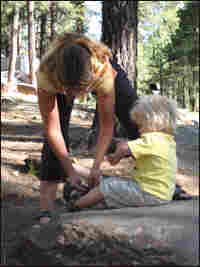 Julie Cole helps son Eli, 2, with his shoe while the rest of the family pitches a tent. Richard Harris, NPR hide caption 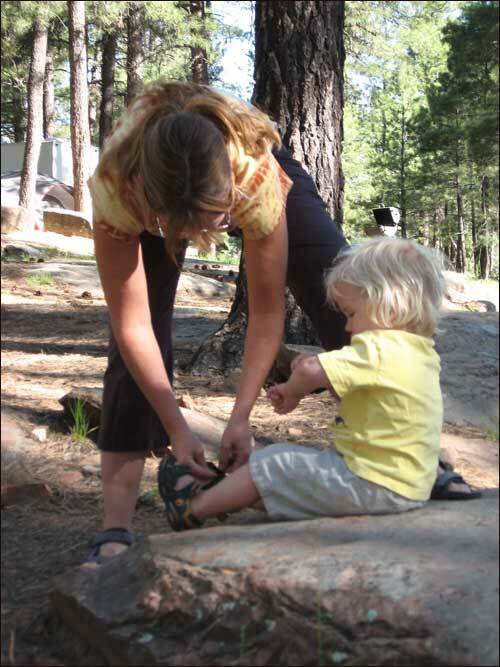 Julie Cole helps son Eli, 2, with his shoe while the rest of the family pitches a tent.

Trees May Aid Against Drought

In response to droughts and threatening sand dunes, Niger villagers have grown trees with the help of international aid. Farmers are encouraged to scatter the trees throughout the land in order to grow crops on the same plot. Read more about how trees may be impacting climate change in West Africa and watch a video report from Niger.

For a scientist couple in the American Southwest, global warming is both professional and personal as they think about the environment they want their children to inherit.

Jonathan, Julie, Jackson and Eli look like any other family out to enjoy a few days under the towering Ponderosa pines, in the highlands of eastern Arizona.

They've driven out of the baking heat of Tucson in an SUV jammed with ice chests, car seats and Rosie, the golden retriever. And now, they're breathing the pine-scented mountain air.

Jonathan Overpeck and Julie Cole see these woods a lot differently from the other campers. They're both geologists at the University of Arizona — and both specialists in understanding the deep history of climate change in this part of the world. They are worried about the future.

They're using the start of their summer vacation to scope out places that are already beginning to change with the climate.

A few hours by car from the mountain lake destination, the family pulls off the road to wander into an area that was devastated by the region's biggest forest fire in centuries. Jonathan, who goes by the nickname Peck, and Julie look a little stunned by the scene.

"Well, at first glance it looks pretty depressing. I mean we're standing amidst a lot of really black and tall trees, and I would say most of them, 90 percent of them, are dead," Julie says.

Peck says the trees are dying because of the drought that has hit the area. His nervous laugh underscores his worries. Climate forecasts are almost unanimous — the Southwest could well be heading into a permanent drought this century, the kind of drought that contributed to the demise of previous civilizations in this part of the world.

Over the past five years alone, nearly one-fifth of the state's forests have burned. The reservoirs are just half full. And all this is happening in the midst of a huge population boom.

"And I don't think people understand what they're doing when they build a house up in these fire-adapted pine forests, under the face of climate change," Peck says. "They're buying a house that has a good chance of burning before the mortgage is paid off."

Julie is happy to see signs that the vegetation here has started to bounce back after the fire.

"I do worry quite a bit that with the changes in climate that we're seeing, what we're going to see here in the future is a very different kind of forest," she says. "It won't be replaced as easily by the same species."

Their boys don't seem to care whether they're running around in a Ponderosa pine forest or a landscape dominated by scrubbier Pinon pines.

Still, their parents would like them to experience the same wilderness they love and enjoy.

At the end of the day, the Overpeck-Cole family picks out a quiet campground. They settle into rituals that go back generations. The Coleman stove comes out, and father and son set to work on the campfire while mom plays with the toddler.

Dinner is whole-wheat pasta and, afterward, Jackson gets to roast a marshmallow for s'mores.

The kids go to bed reluctantly, allowing the parents to finally settle around the fire. Parenting for them means helping their boys grow up, but they're also acutely aware of how rapidly the environment in the Southwest is changing — and how different it is likely to be when 2-year-old Eli and 5-year-old Jackson are adults.

"We're doing things to the environment and the impact is going to be greater for future generations. And when [those] future generations include your own kids, it hits home. But we have to start thinking as a society," Peck says.

Overpeck and Cole don't plan to move out of the region, even though the Southwest is likely to be the part of the United States that will suffer most from climate change. They want to stay, and hope to make a difference.