Accessibility links
Ancient Culture Prompts Worry for Arid Southwest A 1,000-year-old ghost town in the Southwestern United States tells the story of a once-powerful civilization that vanished in the face of drought. Some fear that climate in this region is possibly heading back into those parched conditions. 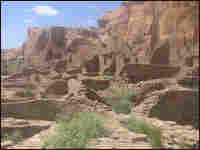 An overview of what remains standing at Chaco Canyon. Jane Greenhalgh/NPR hide caption 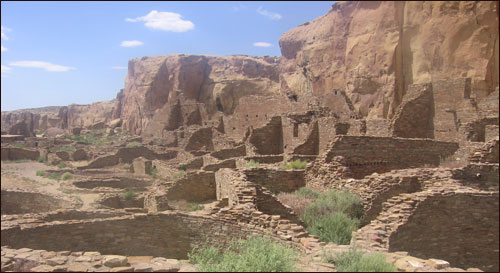 An overview of what remains standing at Chaco Canyon. 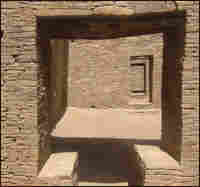 A view into the ruins at Pueblo Bonito in Chaco Canyon. Eve Goldman hide caption 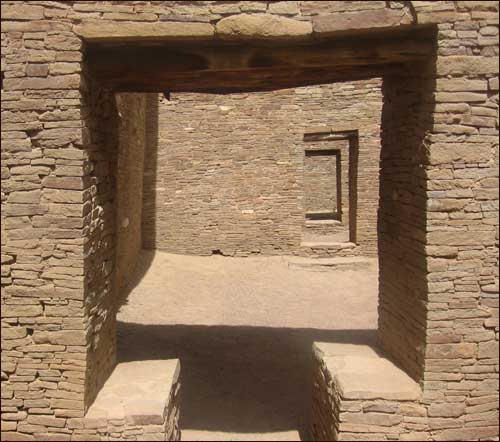 A view into the ruins at Pueblo Bonito in Chaco Canyon.

More from the Cole-Overpeck Family

Peek into the Cole-Overpeck family camping trip under the towering Ponderosa pines in the highlands of eastern Arizona, where climate change is both a personal and professional concern. 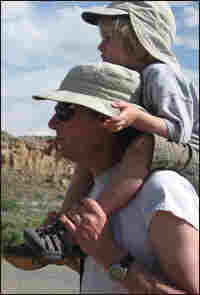 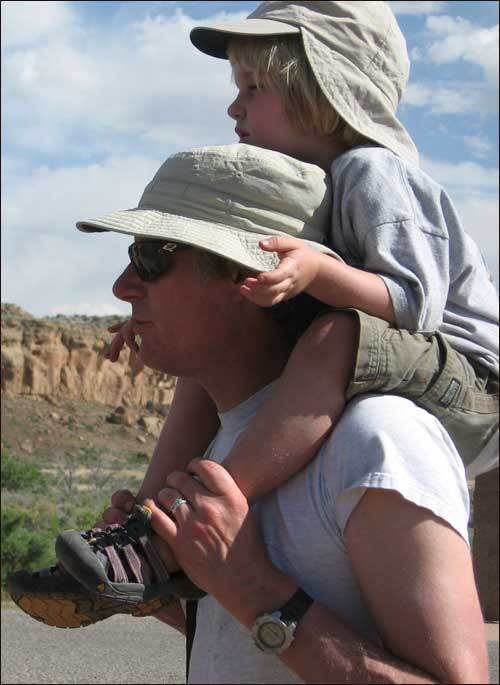 Jonathan Overpeck looks out over Pueblo Bonita with son Jackson, 5. 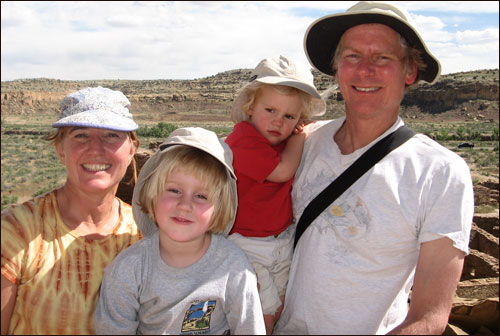 Chaco Canyon is a stark and breathtaking ruin, nestled under soaring, red sandstone cliffs. It resembles the condition of the lost Inca city of Machu Picchu in Peru.

For climate scientists Jonathan Overpeck and Julie Cole, it was worth the journey — kids and all — to experience this remote corner of northwestern New Mexico.

GB Cornucopia, a park ranger, is taking the two professors from the University of Arizona on a tour of the site of a major climate catastrophe. Here in New Mexico, a civilization grew and thrived for centuries before disappearing in the face of a 50-year drought.

"Well, once a lot of people lived here, or at least came here to visit and then they went away, and they have a lot of ideas why, but no one knows for sure," Overpeck explains. "And one of the reasons we think they went away was, in part, because it got dryer. And it got so dry that it was difficult to live here."

Over the course of 300 years, people known as the Anasazi built more than 150 large buildings under these cliffs; but whether they were living quarters, temples, or something else entirely is a mystery.

Cornucopia leads the family toward the ruins of one of the most impressive of these structures, a house called "Bonita."

"Some have referred to this as the edge of downtown Chaco," Cornucopia says. "By [the year 1200 or 1300] everybody was gone. The original builders' last set of building phases was in the mid-1100s."

Bonita was once four or five stories tall. The walls look like intricate mosaics — a testament to the engineering and artistic talents of the Anasazi. Little is known about these people, but they were traders, astronomers and above all else, master builders.

It's easy to draw parallels from Chaco to life in the Southwest today. Once again, there's a thriving civilization. Once again, people are completely dependent on scarce water resources and there's the threat of a devastating drought.

Cornucopia continues the tour through a T-shaped doorway. It's sized just right for five-year-old Jackson.

Above is a ceiling, still intact, made of logs that had been carried by hand from 20 to 70 miles away.

"So why do you think they built their big structures here and not in the big house?" Julie asks.

Cornucopia says he's not sure. He suggests that, perhaps, it was for emotional or psychic reasons, or even because of a series of dreams. The reason remains unclear because the Anasazi left no written language.

Through the maze of rooms, there are some areas too small and airless to be used as sleeping quarters, but too big to be used for storing food for a settlement of this size.

Cornucopia points out that some of these rooms are dramatically over-engineered — using far more precious wood than necessary. A clue, perhaps, that the very act of building this structure was itself a ceremony.

One thing is for certain: The Anasazi abandoned these elaborate buildings in the midst of a 50-year-long drought, which must have made life — in a spot that was already parched — even harder.

Cornucopia explains that lack of water for drinking and for growing crops may have led them away. Not enough growth of trees failed to keep the Anasazi warm with firewood.

"The reason we're asking questions is because we're worried about global warming and what it might do to the Southwest," Overpeck says. "And it might be like when these guys left."

This is not as far-fetched as it might seem. The Southwest is in the midst of a drought that started in 1999. And if forecasts of global warming are correct, the region could end up in a drought that's even longer and more severe than the one that forced the Anasazi to abandon Chaco Canyon. Cole can't help but see that parallel.

"I have often imagined the streets of Tucson or Phoenix as abandoned, and it's a bit scary," she says. "You think that the place that's the center of your region, the biggest city around, could never crumble and fall, and here it has."

Of course, there is more advanced technology now, not only to predict droughts, but to adapt to a changing climate. A permanent drought in the Southwest would surely force some changes in the way people live. Cole and Overpeck say it's time to start thinking about that now.