Accessibility links
Goodbye, Captain America Comic book superhero Captain America has been laid to rest in his last comic book. The superhero made his debut in 1941, punching out Adolf Hitler on the cover of the premiere issue. Guests discuss Captain America's six decades of bravery.

Comic book superhero Captain America has been laid to rest in his last comic book, which hit newsstands Thursday. Captain America made his debut in 1941, punching out Adolf Hitler on the cover of the premiere issue. The author of Fallen Son: The Death of Captain America, talks about the superhero's six decades of bravery. 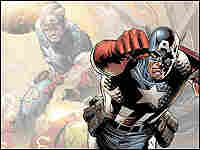 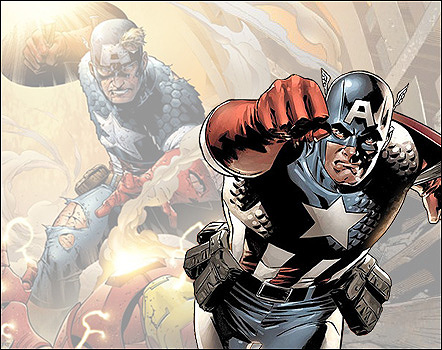 Captain America, a.k.a. Steve Rogers, was introduced in 1941, co-created by Joe Simon and Jack Kirby.

A red, white and blue superhero, born to fight the Nazis, has been rubbed out.

In the latest issue of the long-running series, the character is shot by a sniper on the steps of the federal courthouse in New York City.

"On the last page of the issue he's on a gurney, looking out with lifeless eyes," said Ed Brubaker, who writes the series. "He's been killed."

Captain America was born at the dawn of World War II. Steve Rogers was an ordinary private in the U.S. Army who was given an experimental serum. It turned him into Captain America — the ultimate soldier.

The shield-bearing hero spent the war years fighting the Nazis. After the war, the series was discontinued.

Then Stan Lee came to the rescue. The former Marvel editor-in chief resurrected Captain America in the early 1960s because he loved the character.

"He represented everything that people in any side of the political spectrum find admirable," Lee said. "He was courageous he was honest, he was loyal, he tried to always do the right thing. He had no prejudice; he was like a perfect human being."

Cap was created by writer Joe Simon and artist Jack Kirby. Simon said he was sitting shiva (a Jewish mourning ritual) in his New York studio.

But Morning Edition commentator John Ridley says it's not that easy to kill an icon.

"I believe that he will be back, and as he rises I think we can all believe no matter where we are — from left to right or middle that America will continue to rise," Ridley said. "We have to believe that as a nation, that we will continue to go on and I think Captain America's legacy will be his rebirth."