Accessibility links
Michelle Obama Sees Election as Test for America The wife of Barack Obama is one of the high-profile spouses who is already stumping across the country. Michelle Obama explains her initial reluctance — and why critics who say her husband isn't experienced enough to be president are wrong. 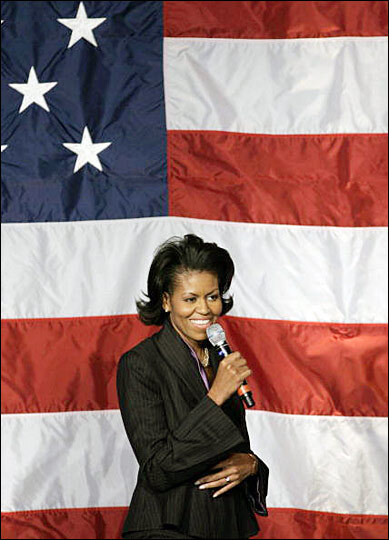 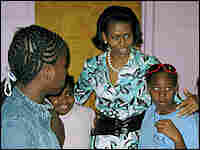 Obama meets with children at the Phyllis Wheatley Community Center in Greenville, S.C., during a recent trip. Obama for America Campaign hide caption

With the presidential race building early momentum — and with campaigns stretched thin by an early primary schedule — candidates' spouses are taking on star billing and traveling across the country to try to woo key voting groups.

One of those high-profile partners is Michelle Obama, wife of Illinois senator and Democratic presidential hopeful Barack Obama. She recently swung through South Carolina, visiting a church and a community center in the Upstate area.

Obama, 43, comes from a blue-collar family on Chicago's south side, where she learned how to be book strong and street smart.

She graduated from Princeton and, like her husband, received a law degree from Harvard. The two met at a Chicago law firm.

A Test for the Country

Not so long ago, Obama had reservations about entering the campaign.

"I, like most people, have been very cynical and reluctant about politics," she says. "You know, politics is a nasty business, and you don't hold out hope that fairness will win, that truth and justice carries the day. You think that it's a business. And there was that part of me that said 'Do we want to put ourselves out for a system that I am not sure about?'"

Michelle Obama says that her reluctance is "realistic" and should not discourage potential supporters.

"What Barack and I talked about when we decided to do this was that we were going to do this authentically and that this was as much a test for us about the country and the [political] process as it was the other way around," she says.

"I am curious ... if you offer somebody up that is real and true, will people grasp that? I want to believe that they will, because that's what they've got in front of them," Obama says about her husband.

Focus on the Family

The issue most important to Michelle Obama is doing more for families in America and, in particular, managing a work-family balance. It's an issue she grapples with in her own life. She also realizes she has resources that many others don't have.

"What about the vast majority of women, who are the lifeblood of our society — nurses, schoolteachers, bus drivers, single-parent mothers — who don't have that structure?" Obama says. "Is there a way that we can invest differently in this country to bring more support and attention to the issues that are basically strangling the family unit?"

Obama says that instead of spending money on the war in Iraq, the government should be providing universal health care and better quality childcare, as well as expanding and improving the quality of education.

One issue that has dogged the Obama campaign is criticism that the first-term U.S. senator lacks the requisite experience to the run the country.

"We've defined 'experience' very narrowly," Obama says, citing her husband's years of community organizing in Chicago, his experience in the Illinois state and U.S. Senate, and his expertise as a civil-rights attorney and constitutional law scholar.

"He probably knows the Constitution better than this administration," Obama says. "This is probably the only country on earth that would look at somebody like Barack Obama and his more than 25 years of public service, and say that he's not experienced. That's the irony of it. That's the game of politics."

His wife says that she believes Barack Obama's leadership will be informed by his experience living in the inner city and his identity as a black man who has felt discrimination.

"What he's said time and time again is that this country is suffering from an empathy deficit, and if you don't have it in you to walk in another person's shoes, it's going to be difficult for us to move through these problems, that what we need, as a country, is to start caring for one another in a very deep and fundamental way," Michelle Obama says. "That's the kind of leadership we need in this next four years."

During her road show in South Carolina, Obama mentions her husband only a few times. During one speech, before an audience of about 300 women at the Bethlehem Life Center in Simpsonville, she speaks about her own life as a working woman: how if a child gets sick, it's the mother who's expected to stay home or rearrange her scheduled.

On top of that, Obama says, women have the added social pressure of being "attractive, charming and delightful mates, well-groomed, in good spirits, ready to be supportive of our significant others."

"I know I can get an amen on that, I'm tired just thinking about it," Obama tells the amused audience.

Frances Gray was among many in the audience who were impressed — but say it's still early in the race.

"I think blacks in South Carolina know they carry quite a bit of weight right now, and therefore they want to go with waiting a while, see how the cards fall and go with a winner," Gray says.

For all of the campaign spouses, including Michelle Obama, success will require drawing not just amens, but actual votes.