Accessibility links
How Safe Is Supermarket Food? A number of recent scares have Americans questioning the safety of the food products they buy — many of which contain ingredients imported from all over the world. But U.S. suppliers say top supermarket brands demand rigorous safety standards.

Listen
How Safe Is Supermarket Food? 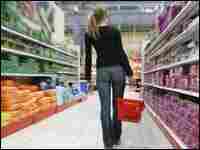 From pet food deliberately adulterated with melamine, to contaminated toothpaste and seafood with drug residues, a number of recent scares have raised questions about the safety of food imported from China and other parts of the world.

So how much can Americans trust our food supply?

Consider one of those frozen prepared meals found in a supermarket freezer — for example, Weight Watchers' ravioli florentine. The box bears a long list of ingredients: wheat, milk, sugar, salt — and some weird stuff, such as carrageenan, which happens to be a kind of jelly extracted from seaweed. It's in lots of foods.

Heinz makes this meal by combining more than 50 industrial food ingredients. Each ingredient has probably changed hands a dozen times on its way from the farm or the sea. Each one is sold and then resold to a chain of distributors, exporters, importers, and wholesalers before finally reaching Heinz. The 50 ingredients in this one tiny meal could easily have gone through 500 different suppliers, spread all over the globe.

So, to trust that the meal is safe, you have to trust 500 different companies-- most of them are ones you've never heard of.

NPR visited one of them: Woodland Foods is in Gurnee, Ill., just outside of Chicago.

The first thing a visitor notices is the delicious smell: like a Middle Eastern spice market.

Paul Suhre is product manager at Woodland Foods, the nation's leading wholesaler of items such as dried mushrooms, chilis, beans and spices. The company sells to most major food manufacturers and to a lot of restaurant chains. It gets its ingredients from 45 different countries. China is the No. 1 source.

NPR's visit coincided with the arrival of a shipment of champignon mushrooms. Purchasing manager John Cruz immediately scooped some of the mushrooms into a small plastic bowl to send to quality assurance, to make sure there's no infestation or foreign matter.

The FDA only tests about 1 percent of food imports. So Jerry Cruz, the staff microbiologist, heads a team of inspectors who test everything--every single box, bag, or crate of ingredients-- right at the company's offices. Some food is also sent to an independent lab nearby for more advanced tests. Jerry Cruz says his company turned to these outside experts after the recent pet food scare.

"We actually went through all our list of products from China," Cruz says. "We took the top 10 and said, 'OK, what could be the issue with these products?' And we sent them out for heavy metal testing, pesticide testing and Melamine testing."

There were no problems.

Cruz, in fact, recently returned from a trip to China, where he was inspecting suppliers. This safety obsession is a basic necessity if Woodland wants to sell to big food companies, product manager Suhre says.

"They go so far as to take trips with us to our suppliers," he says of their Fortune 500 clients. "They're telling us: 'We want to know where you're getting this from.' And they're really tough on us."

Heinz recently inspected Woodland's plant. Most big food companies run safety audits of all their suppliers, Cruz says. That's why he doesn't worry about the food he buys in supermarkets. He knows that any recognizable brand has rigorously vetted every one of its suppliers.

It's not just big companies who make such demands.

Frontier Soups is just down the road in Waukegan, Ill. Trisha Anderson founded the high-end dried soup company in her basement 21 years ago.

"We turned to Woodland knowing that they have top-quality products," she says.

Anderson is terrified that a bad ingredient scare could ruin her business. And she knows how it could happen: Almost every day, some food supplier she has never heard of calls Frontier's purchasing manager, Eva Pantoja, and offers to send a shipment of, say, black beans or lentils really cheap.

"And then they offer you this incredible price," she says. "And they're wanting to offload 7,000 pounds at once. But they don't give you any guarantee of how long they've had the product."

Many say these low-end ingredient brokers are the scourge of the industry. They were behind many of the recent Chinese product scares — including poisonous toothpaste and possibly defective tires.

As a rule, experts say, such suspicious products go to cut-rate restaurants and deep discount stores. They rarely go to established brand-name companies. And that means the food in any brand-name supermarket is very likely safe to eat — at least in the short run. Of course, shoppers still have to worry about all that sodium and fat.