Accessibility links
Soldier Recounts Year Spent Training Iraqi Police Lt. Col. Robbie Robbins recently returned from Iraq after spending a year assisting in the training of Iraqi National Police Brigades at a camp south of Baghdad. He says most Americans don't understand how much patience the situation in Iraq requires. 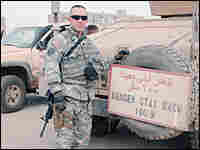 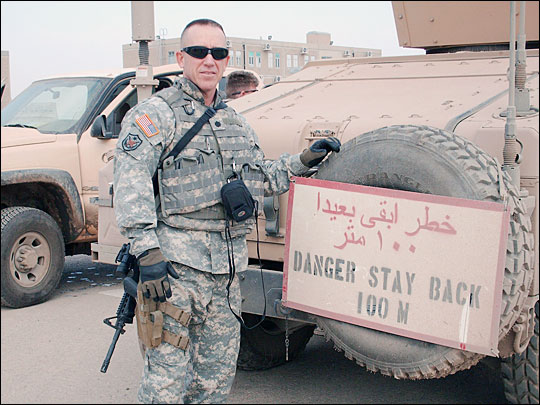 Lt. Col. Robbie Robbins of the 108th Division of the Army Reserve recently returned to the United States after a year in Iraq.

Lt. Col. Robbie Robbins, an Army reservist and assistant school principal in North Carolina, recently returned to the United States from Iraq after spending a year assisting in the training of the Iraqi national police.

In Iraq, Robbins was with the 108th Division of the Army Reserve. His job was to monitor an Australian contractor training local recruits for the Iraqi National Police Brigades, and was assigned to a base about halfway between Baghdad and the southern city of Basra.

As part of a series of conversations with people who have recently returned from Iraq, Robbins speaks with Michele Norris.

Robbins says loyalty and a steady paycheck are the main reasons Iraqis would want to join the security forces, given the constant attacks on police recruits.

"Some Iraqis want to see that country do well, in a democracy. They want to see the country as a safe place for their children to grow. And to say they're not, then why come down to a police station and stand in line, knowing the chances are at least 50-50 that you're going to get blown up that day?" Robbins says.

"They keep coming back, and it's amazing how resilient they can be at times, and it's a paycheck — they pay pretty good, it's a way to make a living. Plus I think it's loyalty to the country — at least we hope it is," he adds.

Being back in United States and reading about Iraq, Robbins says that Americans don't understand what Iraq has been through.

"If you go back in history, and look at the beginning of Iraq, and what they've been through with Saddam Hussein, we wouldn't be the people we are today if we lived the way they have lived," Robbins says.

And most Americans don't understand how much patience the situation in Iraq requires, Robbins says.

"You have to go there, you have to live with them, you have to eat with them, then you get a feel for where they're coming from, why it's the way it is, and what it's going to take," the soldier says.

"When I left, I just felt like I left a country that, if it survives, it will be the greatest thing in the world for all of us," Robbins says. "But if it doesn't, then it could affect my children, and my lasting impression was how … one man [Saddam Hussein] can tear a country apart. It's unbelievable how much power that man had over the Iraqi people."