Accessibility links
China Executes Ex-Food and Drug Chief China executed Zheng Xiaoyu, the former head of its food and drug watchdog, for approving untested medicine in exchange for cash, the strongest signal yet from Beijing that it is serious about tackling its product safety crisis. The execution was confirmed by state television and the official Xinhua News Agency. 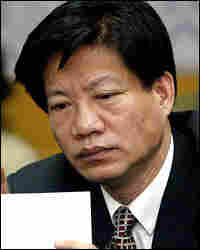 Zheng Xiaoyu, the former director of China's State Food and Drug Administration, is seen in a meeting of the Chinese People's Political Consultative Conference in Beijing four years ago. He was executed Tuesday July 10, 2007, for approving untested medicine in exchange for cash, leading to the deaths of at least 10 people. AP Photo/EyePress hide caption 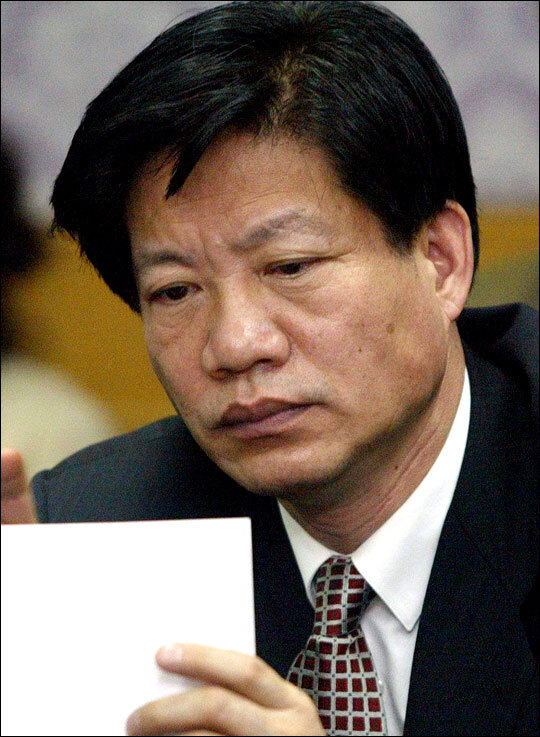 Zheng Xiaoyu, the former director of China's State Food and Drug Administration, is seen in a meeting of the Chinese People's Political Consultative Conference in Beijing four years ago. He was executed Tuesday July 10, 2007, for approving untested medicine in exchange for cash, leading to the deaths of at least 10 people.

China executed the former head of its food and drug watchdog on Tuesday for approving untested medicine in exchange for cash, the strongest signal yet from Beijing that it is serious about tackling its product safety crisis.

The execution of former State Food and Drug Administration director Zheng Xiaoyu was confirmed by state television and the official Xinhua News Agency.

During Zheng's tenure from 1998 to 2005, his agency approved six medicines that turned out to be fake, and the drug-makers used falsified documents to apply for approvals, according to previous state media reports. One antibiotic caused the deaths of at least 10 people.

"The few corrupt officials of the SFDA are the shame of the whole system and their scandals have revealed some very serious problems," agency spokeswoman Yan Jiangying said at a news conference held to highlight efforts to improve China's track record on food and drug safety.

Yan was asked to comment on Zheng's sentence and that of his subordinate, Cao Wenzhuang, a former director of SFDA's drug registration department who was last week sentenced to death for accepting bribes and dereliction of duty. Cao was given a two-year reprieve, a ruling which is usually commuted to life in prison if the convict is deemed to have reformed.

"We should seriously reflect and learn lessons from these cases. We should step up our efforts to ensure food and drug safety, which is what we are doing now and what we will do in the future," Yan said.

Zheng, 63, was convicted of taking cash and gifts worth $832,000 when he was in charge of the State Food and Drug Administration.

His death sentence was unusually heavy even for China, believed to carry out more court-ordered executions than all other nations combined, and indicates the leadership's determination to confront the country's dire product safety record.

Fears abroad over Chinese-made products were sparked last year by the deaths of dozens of people in Panama who took medicine contaminated with diethylene glycol imported from China. It was passed off as harmless glycerin.

Yan said she did not have any information about whether the Chinese manufacturer, Taixing Glycerin Factory, and the Chinese distributor, CNSC Fortune Way, had been punished.

"We will try to get more information from the department concerned and we will release it to you," Yan said. She wouldn't elaborate.

China admitted last month that it was the source of the deadly chemical that ended up in cough syrup and other treatments but insists the chemical was originally labeled as for industrial use only. Beijing blames the Panama traders who eventually bought the shipment for fraudulently relabeling it as medical-grade glycerin.

In North America earlier this year, pet food containing Chinese wheat gluten tainted with the chemical melamine was blamed for the deaths of dogs and cats.

Yan said the food and drug administration was working to tighten its safety procedures and create a more transparent operating environment. The administration has already announced a series of measures to tighten safety controls and closed factories where illegal chemicals or other problems were found.

But Yan acknowledged that her agency's supervision of food and drug safety remains unsatisfactory and that it has been slow to tackle the problem.

"China is a developing country and our supervision of food and drugs started quite late and our foundation for this work is weak, so we are not optimistic about the current food and drug safety situation," Yan said.

Chinese officials have already said the country faces social unrest and a further tarnished image abroad unless it improves the quality and safety of its food and medicine.

The government has faced increasing pressure from its international trading partners to improve quality controls after a series of health scares attributed to substandard or tainted Chinese food and drug exports.

The list of food scares within China over the past year includes drug-tainted fish, banned Sudan dye used to color egg yolks red, and pork tainted with clenbuterol, a banned feed additive.

China has also stepped up its inspections of imported products and said some U.S. products are not safe.

In the latest case, the official Xinhua News Agency reported Tuesday that a shipment of sugar-free drink mix from the United States had been rejected for having too much red dye.

Last week, China's food safety watchdog said almost 20 percent of products made for consumption within China were found to be substandard in the first half of 2007. Canned and preserved fruit and dried fish were the most problematic, primarily because of excessive bacteria and additives, the agency said.