Accessibility links
You Can Play the Record, but Don't Touch Physicists from California have updated a hands-off approach to playing old and broken records. A computer-generated program called IRENE has found a way to reconstruct sound without ever touching classic LPs.

Listen
You Can Play the Record, but Don't Touch 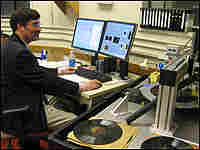 Peter Alyea, a digital conservation specialist at the Library of Congress, scans a record from the 1930s. Nell Boyce, NPR hide caption 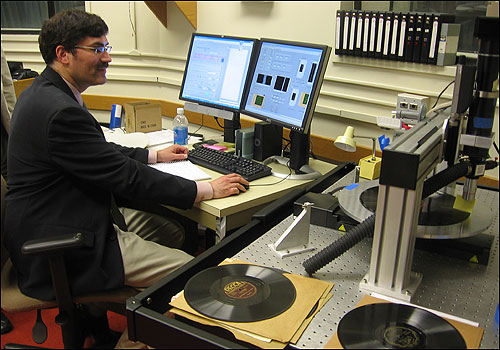 Peter Alyea, a digital conservation specialist at the Library of Congress, scans a record from the 1930s.

You Be the Judge

IRENE uses a camera and scanning system to reconstruct these classic songs from the original version, without ever touching the record. 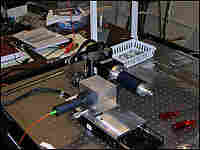 IRENE, an audio-recording system, can scan old and damaged records and make digital recordings from them. Carl Haber hide caption 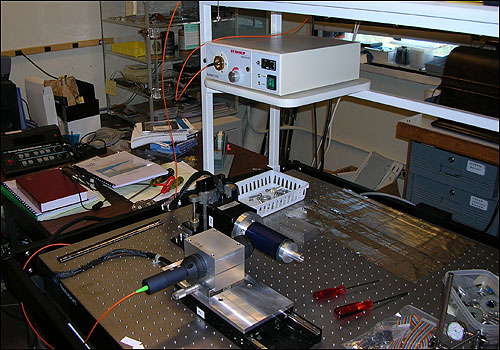 IRENE, an audio-recording system, can scan old and damaged records and make digital recordings from them.

What Started it All

Particle physicists originally found a way to allow preservationists to play fragile historic audio recordings on acetate and wax cylinders without damaging them. 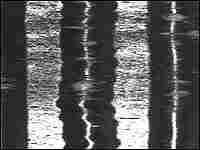 A scanned photo image of the grooves in the record from "Hemlock Blues" by David Lee Johnson from the early 1950s. IRENE skips right over the scratched parts (as seen above) of normally unplayable records. Carl Haber hide caption 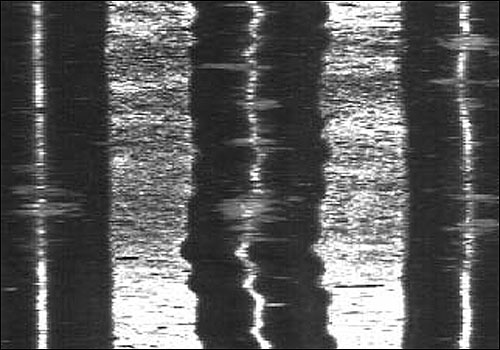 A scanned photo image of the grooves in the record from "Hemlock Blues" by David Lee Johnson from the early 1950s. IRENE skips right over the scratched parts (as seen above) of normally unplayable records.

At the Library of Congress, in a small, white room with bright red carpet, physicist Carl Haber sits down to play a record from 1930. It's a recording of Gilbert and Sullivan's "Iolanthe." But here's the strange thing: This record is broken.

"It looks like somebody just got hungry and took a bite out of it," says Haber. He has positioned the record on a turntable and fitted the broken piece back into place, like it's a jigsaw puzzle. "If we spun this thing fast, the piece would come flying off, you know, and maybe hit somebody," he says.

But this turntable doesn't spin like a normal record player. And there's no needle hovering over the record. Instead, there's a camera linked to a computer. It snaps detailed images of the groove cut into the disc, and uses the images to reconstruct the sound without ever touching the record.

Haber got the idea for this setup a few years ago, when he was driving to work and listening to NPR. He heard a report on how historic audio recordings can be so fragile that they risk being damaged if someone plays them by dragging a needle over their surfaces. It made Haber wonder if he could get the sound off old recordings without touching their delicate surfaces. He worked with a colleague, Vitaliy Fadeyev, and they managed to reconstruct sound on a 1950 recording of "Goodnight, Irene" performed by the Weavers.

This was just a proof of principle. They have now developed their hands-off technique to the point that it's being tested at the Library of Congress to see whether it's good enough to someday scan the library's vast archive of sound recordings.

One thing they've learned: A broken record is no problem. Haber clicks a mouse and the camera takes pictures of the groove on "Iolanthe."

"And by taking these pictures, it essentially just unwinds the record into a big long stripe," Haber explains.

The picture appears on Haber's computer screen. It looks like a black and white photo of a tire tread.

"Here's the break," he says, pointing to a line. "You can see, there's a little piece of dust, little scratch marks on it." The computer ignores all these flaws as it translates the images into sound.

It used to take Haber hours and hours to re-create short sound clips. Now his improved system, which he calls IRENE, can scan a record quickly enough to make it roughly comparable to a trained technician playing an old record in real-time.

IRENE was installed at the Library of Congress late last year. The library has millions of old audio recordings, and many are in poor condition or use obsolete formats. Peter Alyea, a digital conservation specialist at the library, says that to play old records, you often need trained technicians who can do things like choose the proper needle out of dozens of options. But if IRENE lives up to its potential, Alyea says, anyone could make a digital copy of an old record.

"They don't have to worry about any of the technical aspects," he says. "They simply can stick a disc on it and get some sound out of it."

Alyea says it's like a photocopy machine for sound. "It brings the possibility of automation much closer to reality for these kinds of materials."

And given that he has thousands and thousands of records that he would like to digitize and make widely available, the prospect of automation is hugely attractive. Audio recordings could be scanned in the same way that some libraries are now scanning all of their books into a digital format. But Alyea needs to know: Exactly how good is IRENE at making digital copies?

So he and Haber are putting IRENE through its paces. One test involves a disc etched with simple tones to see how well IRENE can read some old-fashioned discs coated with lacquer. The library has thousands of these one-of-a-kind records. The format is obsolete.

"The machine is not adding its own color. It's not adding anything of its own nature," he says.

Haber says IRENE does take some things away. He plays one record from 1953, a Les Paul and Mary Ford recording of the song "Johnny Is the Boy for Me." This record has a bad skip in it that's very apparent on a regular record player. But IRENE skips over the skip like it's not there.

Haber plays an IRENE reconstruction of another record, a very worn shellac disc with a song called "Hemlock Blues," performed in the 1950s by David Lee Johnson. It's owned by a collector who says it's too damaged to play it with a regular needle. But IRENE scanned it and got some decent sound.

IRENE isn't perfect. It removes pops and clicks, but it sometimes has a hissing noise in the background. Still, the Library of Congress finds all this encouraging enough that it has started testing the system on hundreds of discs, what Alyea describes as a kind of simulation of what a mass digitization project would be like.

When taking flat photographs, it can create a three-dimensional image of the groove on a record, or on an old wax cylinder. Haber been working with the University of California's Phoebe Hearst Museum of Anthropology, to reconstruct sound from field recordings, like one wax cylinder made around 1911 that features a Native American called Ishi.

Haber says it's amazing to hear these voices from the past. "There's this whole human and cultural component to what we're looking at," says Haber, whose main job is studying subatomic particles at Lawrence Berkeley National Laboratory in California. "That makes it wonderful."