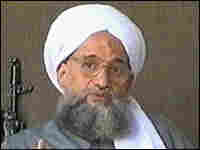 Al-Qaida's No. 2 leader on Tuesday issued an audiotape threat against Britain for giving the novelist Salman Rushdie a knighthood, a U.S.-based monitoring group said.

The 20-minute speech by Ayman al-Zawahri was entitled "Malicious Britain and its Indian Slaves." It was produced by as-Sahab, the multimedia wing of al-Qaida, to be distributed to extremist Web sites, said the U.S.-based SITE group, which monitors al-Qaida messages.

The authenticity of the tape, also reported by Alexandria, Va.-based IntelCenter, could not be independently confirmed.

Osama bin Laden's deputy lashed out at Britain for having awarded a knighthood to Rushdie last month, saying it was defying the Islamic world by granting the honor to the author of "The Satanic Verses," deemed to insult Islam.

A "very precise response" is in preparation to retaliate against this offense, al-Zawahri was quoted as saying by SITE.

Addressing British Prime Minister Gordon Brown, the al-Qaida deputy chief said Britain's strategy in the Middle East "has brought tragedy and defeat upon you, not only in Afghanistan and Iraq but also in the center of London." This appeared to be a reference to the deadly London transit network bombings which occurred just about two years ago.

"And if you did not understand, listen, we are ready to repeat it for you," al-Zawahri was quoted as warning the British prime minister.

In response, the British government said the knighthood awarded to Rushdie was "a reflection of his contribution to literature."

"The government has already made clear that Rushdie's honor was not intended as an insult to Islam or the Prophet Muhammad," said a spokesman for Britain's Foreign Office.

"We will continue to tackle the threat from international terrorism as a priority in order to prevent the risk of attacks on British interests at home and overseas, including from al-Qaida," the spokesman said, speaking on condition of anonymity in keeping with Foreign Office rules.

Rushdie was awarded a knighthood by Britain's Queen Elizabeth II last month to honor his career as a writer. The decision angered Muslim radicals, with some groups renewing calls for the Indian novelist to be sentenced to death. Iran's leader Ayatollah Ruhollah Khomeini had issued a fatwa, or religious ruling, in 1989 to sentence the author to death for having written "The Satanic Verses," deemed blasphemous against Islam and the Prophet Muhammad.

Al-Zawahri has issued eight video messages this year, along with a number of audio speeches. His previous tape was distributed last week by as-Sahab, the al-Qaida media wing.